The R242AAC incident: the outcome

There's an article in the Independents aying "Helmet Cameras are useless and the police can't do anything with the videos". Sadly we fear this is untrue: the police can prosecute drivers with the videos -if they choose to do so. The fact that most of the country hasn't seen any such prosecutions is due to the police, not the law.

Sadly, because Bristol police do intervene. Here is the sentencing letter from a small incident in which the car R242AAC forgot to give way to cyclists on a roundabout. We have covered this here and here. 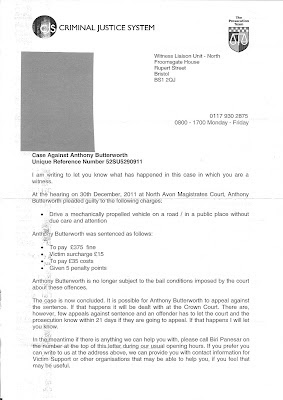 I am writing to let you know what has happened in this case in which you are a witness.


Five penalty points merely for nearly running two cyclists over? It's that -and the impact on the driver's insurance that hurts.

As a reminder, here is the incident in question:

Admittedly, he did pull straight out onto the roundabout without looking, but it was a quiet bank holiday. He had no reason to expect people to be on bicycles at that time in the morning.

The war on the motorists will not be over while the police are using helmet camera videos to impose fines and penalty points on law-abiding motorists!

We actually spoke to the parent who made the video, and got this statement:

"I am pleased that finally this driver was punished for their actions. The police and Jon Rogers were very supportive all through this process -going to a lot of effort to track down and prosecute the driver. I would like to thank everyone involved.

As you can see from the video, my son was wearing a helmet, and he has taken part in the council-backed cycling courses, which instruct children how to cycle safely in our city.

As you can also see, this does nothing to address the fact that some drivers are selfish and dangerous. You can tell people what the safe position for vehicular cycling is, but unless the drivers look -or care that you are there-, you are still in danger.

The next time someone tries to argue that vehicular cycling is the right approach, that safety in numbers is the answer -and dutch style cycling paths a mistake -point them at this video and say "how could these people have cycled more safely?"


Well, they have the right to their opinions, no matter how misguided they are. We just close with the thought that a police force enforcing laws against motorists for such minor infractions of traffic laws could be one of the most  dangerous parts of a cycling city.

Posted by Bristol Traffic at 16:55

Shocking! This police action and court prosecution has shaken my belief that pesky tax dodgers with cameras were fools unto themselves if they thought it would make a difference! There is a real danger now of being held account for selfish and dangerous driving.

I hope the parent is satisfied! (Good on you SL!)

By sending details of an inattentive driver, the name of Anthony Butterworth gets posted on the internet, merely because he nearly ran into a child and his dad using a tonne of metal whilst not paying attention to the road.

The problem here is that a simple search on his name on, say, Yasni.co.uk :

might reveal far too much detail about him, or anyone else with his name. Including his / their wish lists on Amazon.

Is anyone safe with these pesky helmet cameras out there?