There' s a big row going on -no, not the RPZ. Toll increases on the Clifton Suspension Bridge: from 50p to £1 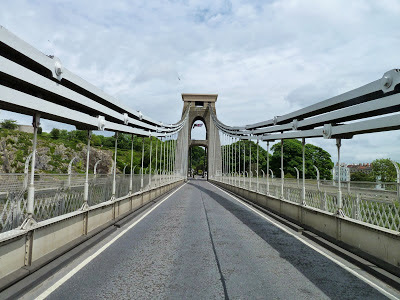 This bridge has an essential role in allowing the important people who live in Abbots Leigh drive over with their kids on the Clifton School run, then go to the cafes of Clifton -funding a deprived part of the city, then either driving home or on to work.

Doubling the bridge tolls would force these people to drive down the hill, so adding another 10 minutes to their journey times. This would force them to get up and out ten minutes early, and overall cost 20 minutes of valuable time. Well, valuable, but not £1 extra/day valuable. 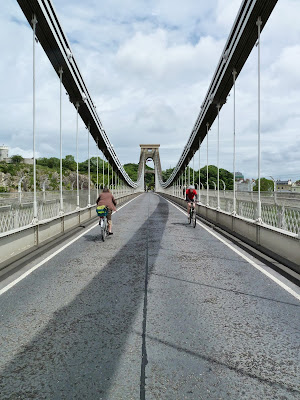 The residents are -rightfully- protesting against this. They didnt buy £1M+ houses in Somerset to have the Bristol city residents charge them something for the upkeep of the city and its core tourist attractions. 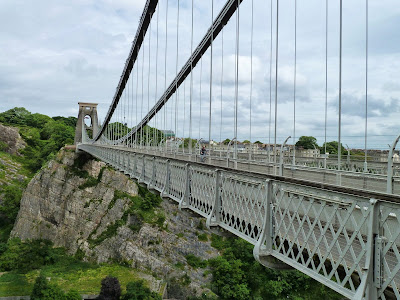 This is why they are proposing that the cyclists and pedestrians should pay for their use of the bridge too! 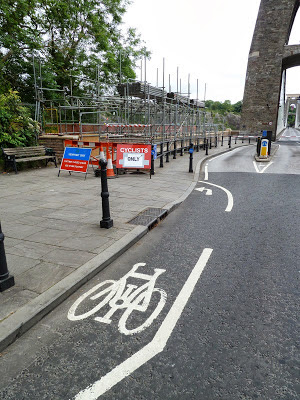 Anyone suggesting that the residents of Abbots Leigh could in fact walk or cycle over the bridge -for free- are missing the point entirely. They are not "cyclists" and resent the city from trying to make them become them. Furthermore, they are heading to Clifton -which, as we know, is the part of the city that doesn't like cyclists.

The enquiry begins on Thursday May 30 in Ashton Court Manor. Come and show your support for taxing the cyclists and pedestrians to stop the wealthy taking the whole burden of maintaining the bridge!


My name is Prashan and I work for RDF television. We are currently developing a documentary which is focused on the recent nightmare experiences of Bristol’s motorists. It would be really great to talk with some of the passionate contributors of this blog about their experiences of driving in Bristol and their views on Bristol council. Please pop me an email and we can arrange a chat. prashan.gunawardana@<snip> Thank you

Ignored, obviously. We consider ourselves the city's premier outlet of all content related to traffic in the city, be it important people in expensive 4X4s, transport-poor in little-people cars, the very poor on foot, and the tax-dodging law-breaking criminals on bicycles.

A few weeks later another hits the spamwall and fails.


WHAT DO YOU THINK ABOUT PARKING AND TRAFFIC IN BRISTOL? Are you fed up with congestion & parking in Bristol? Are you strongly opposed - or for residents parking? I am working on a documentary for Channel 4 on the issues that are affecting Bristol’s traffic problems – and what to hear what you think! If you’ve got a strong opinion about traffic or parking. Or good ideas about how to make our roads work better, please get in touch - nicky.henderson@<deleted> are an award television production company specialising in documentaries. Recent programmes include Secret Millionaire (C4) and Emergency Bikers (Five). We look forward to hearing from you Nicky Henderson.

Oh wow, the same company that did Emergency Bikers! There is an opportunity here for a series related to the Bristol Traffic team's primary business model, "Emergency Adult Content delivery team!s". What do you do when the battery on your sex toys go flat and you can't replace them as the device is "in situ". Call us. What do you do when your internet connection goes down just as you settle down for an evening of video watching? Call us. Yes, it would be great.

However, we don't see why we need a half hour television broadcast to state a fact that we have been documenting since 2008. We live online, in the network infrastructure provided by our strategic partners, Google. We are currently looking at using Netflix's application architecture instead, as anything called Chaos Monkey has to be played with. but Television? That's the stuff you have to download with bittorrent as they aren't as accessible as youtube. We don't see any strategic value in partnering there. We would rather work with Bristol's premier media company, Yogscast. The first youtube channel in the UK with 1B views; 4M subscribers & Bristol based. They are our role models. 4 million viewers watching them discuss minecraft mods or the best way to cook Jaffa Cakes when camping rough. These are the people we want to have knocking on our door discussing opportunities for collaboration

The other issue is that a recent London-based documentary, The War on Britain's Roads, painted an excessively sympathetic view of cyclists. Rather than just denouncing them for being there, by using many of their helmet camera videos, it implied that cycling round London was a dangerous activity -without ever raising the issue is why they were cycling round London in the first place.

Here, then, is our full response to RDF television

We hope this clarifies things.

The world's most popular documentary of the nightmare experiences of Bristol's Motorists: data-driven since 2008
Posted by Bristol Traffic at 23:35 No comments:

Time to nip over to the BRI to see how the dropoff/bus only zone is working.

There's someone being helped into an hospital car; the one behind it is also marked as patient delivery. The lovely "lowered at both sides pavement space" is in use, and there's a car with a driver in it waiting for a space to come free. 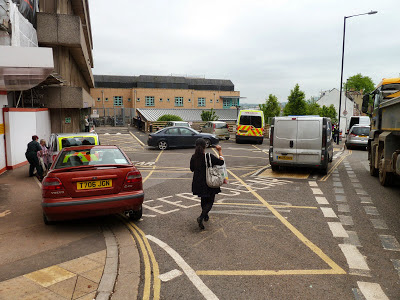 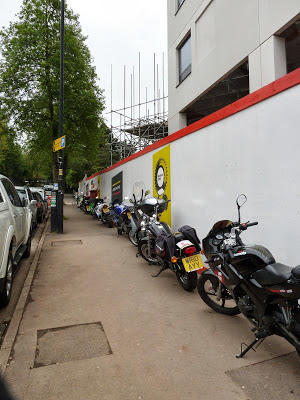 This isn't incoveniencing pedestrians, as Brunel Flooring Limited, in WU050GS 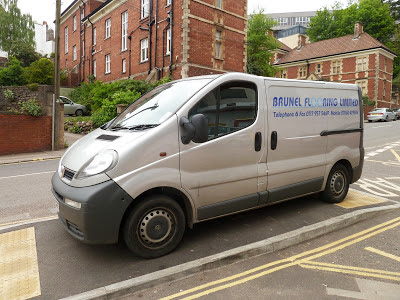 If there is one fault -not enough pavement to go round. 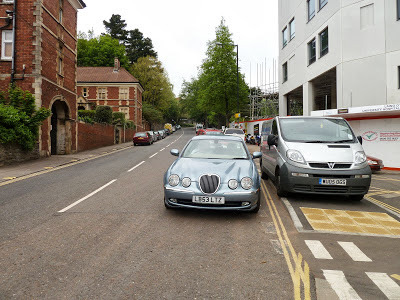 Some drivers -such as the driver in LB53LTZ are being forced to double park
Posted by Bristol Traffic at 12:30 No comments:

Bristol Traffic does have a twitter account, which rarely gets used for the following reason "to spend time on twitter is to waste an important life". Yet we do get notifications on messages sent to @BristolTraffic, as it is a way for little people to contact us. We obviously care more for little people to call up our Stokes Croft "adult content" fulfilment centre, get redirected to our Luxembourg sales office for Bristol Traffic s.a.R.L, buy entertainment products from the tax-efficient locality and then have us deliver them to anywhere within the former Avon county.

Today, we get a tweet from one Andrew Fawkes:


@bristoltraffic Would you like to R/T this? Even turning them off at peak times would help congestion! Thank you.

@AndrewWFawkes is proud to be a "Marketing consultant, career coach, classic car activist, MotoGP fan, guitarist & singer in a band and lots of other spare time activities!", based in Somerset UK".

Somerset is of course the elf-kingdom, which is where important people live, despite the fact that Bristol council is trying to push bike lanes into the kingdom -against the elf-folk's wishes. Everyone who commutes in up the A370 gets stuck somewhere in the way by anti-car policies of the inner city.

The traffic lights on roundabouts are merely a detail -and not one we care much for ourselves.

We are actually against them for a number of reasons.

What we aren't sure about is the idea that turning them off at peak times would help congestion.

Having to put traffic lights on a roundabout is an indication that the roundabout has entered a failed state; that without them you woudn't get fair access to the roundabout.

Because a feature of a roundabout is that you can pull out, which can only be done if one of two conditions are met
At peak hours, the "nobody on the roundabout" condition is not met, so we depend on the "traffic exiting" condition.

If people don't turn off onto your junction, you don't get out -leading to what is known in queue/scheduling theory as starvation.

For anyone trying to cycle over a roundabout when someone pulls out, this is why we do it. It's not just because we hate the cyclists for being there and not paying -it's because the only way to pull out in a busy roundabout

Here, for example, is the car AE59JGU pulling out in front of a bicycle on the St Michaels roundabout. It's not that they didn't see the bicycle -it is that it was a weekday morning, and the only way to get out was to cut up the cyclist. There was no reason for the cyclist to catch up with them and say "please don't cut me up like that -it makes you look bad in the video". That was just selfish behaviour by a cyclist that shouldn't have been there.


While covering this incident, notice that the car had tinted windows. This is a great feature from a game-theory perspective, as it introduces more uncertainty into the negotiations. There is no way the tax -dodger could make eye contact with the driver, to see them and for them to see you. Instead, the dark windows depersonalise the car " there is nobody in there that cares -this is only a machine", as well as stopping the cyclist from even imagining that they've been seen.

Given that uncertainty, slowing down is the only thing the tax-dodger could do -creating the opportunity for the audi to pull out. Such an incident discourages the city-folk from cycling, so making easier for commuters from the Elf-Kingdom to come in to the city and so create wealth.

Andrew -thank you for your opinions! We have summarised our views on the matter!
Posted by Bristol Traffic at 09:39 No comments:

Smart cars are cool. We like them because they're easy to park, and only take up half the space of the Bristol Traffic White Van. So why is WK62BFP being ticketed, we asked ourselves? 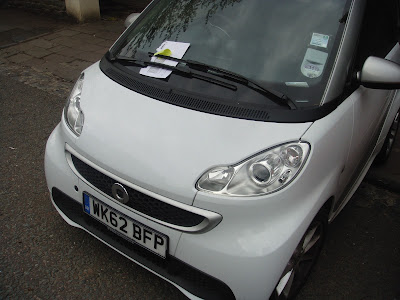 It appears that it's indulging in a little pavement parking, half way up Jacobs Well Road. We're not objecting to this, as if it had been parked fully on the road it would have stuck out, and caused a problem for fellow motorists. 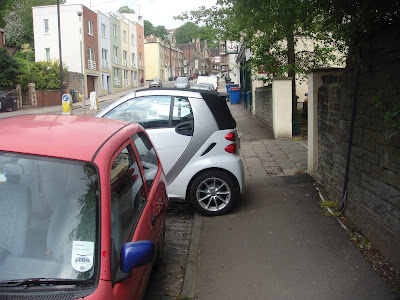 What's wrong here, though, is that this isn't a parking ticket. It's some wag protesting at the parking position, by leaving a post-it note on the windscreen. Directing the driver to go to a non-existent website. 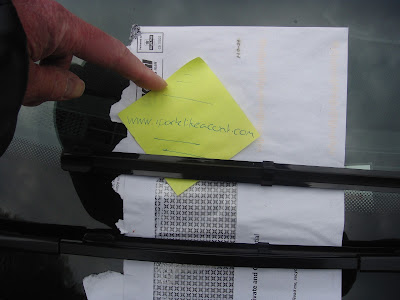 If only these annoying japers had any intelligence, they would have asked the driver to visit this website instead.
Posted by Quercus at 14:02 No comments: