Freewheeler Back! And he mentions us!

Freewheeler's "Crap Walking and Cycling in Waltham Forest" blog used to send lots of traffic our way, so it's been sorely missed -we are overjoyed that he is back.

Not only, that, he mentions us in a rogue cyclist article, where he claims that we will be overjoyed to see that someone cycling in Hampstead Heath got fined 330 quid, whereas drivers caught doing over 90-100 mph on the A94 were only fined 200.

As background, one of our reporters actually grew up in the Kilburn/Cricklewood area, shocking apparently even went to the same primary school as Bradley Wiggins, albeit many decades earlier. As such, they know about the Heath, which pubs nearby were best for under age drinking, and which of the open air swimming pools are best for ad-hoc sexual encounters. It's that latter point that concerns us. Unlike the Downs, which has good driving and parking right next to the play areas, the Hampstead Heath pools are less accessible, and a quick bike ride through the Heath is a fast way to get there -and it's not as if you are holding up anyone important. As for the idea of punishing someone for engaged in illegal activities on the Heath, -well, we'll have to check through our phone's photo collection from the last weekend special in NW3, but we think that Magistrates name sounds familiar -if he is the one in the video, no moral high ground there.

After Dark: it is everyones right to do what they want on hampstead heath provided they are consenting adults. And to keep personal photos of the activities afterwards.

Regarding the motorists, we are not suprised that they were let off more lightly. These people need to drive. Nobody needs to cycle -and nor, in the absence of cycling licenses and penalty points, could the tax-dodgers claim the "exceptional hardship" defence.


You see? These people need to drive for their work.

Now some people -and we suspect Freewheler to be one of those, along with the entire membership of the People's Cycling Front of South Gloucestershire, will say something like, "if these people need to drive for their job, perhaps they should think about before driving 30-50 miles an hour above the speed limit, as these people did". Perhaps they'd say "If all these people drive as part of their job, then banning them from driving is a good outcome". Or worst of all "If these are the professional drivers -what does it say about the amateurs?"

That the kind of negative thinking that will hamper our country's economic recovery,

It's precisely why speed limits hold back regeneration that the government is looking at 80 mph limits, and why the DfT isn't running a series of adverts saying "Can't live without a car? Don't break the speed limit", or "Need a car for work? Better not lose your license then".

As it is, they don't need to do that because the magistrates all understand that people driving and speeding is essential to returning Britain to Greatness, whereas someone cycling on a footpath is just a troublemaker who deserves to have the book thrown at them.

By selflessly parking on the pavement, the driver of this Audi - WV56YKD - has managed to save us, the tax payers, the expense of at least 3 square metres of new pavement surfacing in Redland. We are impressed. 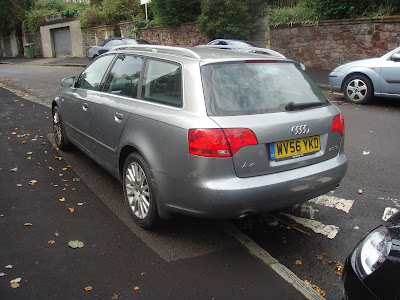 we are not entirely sure what the rights of ways of this cyclist-only junction in the middle of the temple gate roundabout ,-close to templemeads railway station-  actually are. 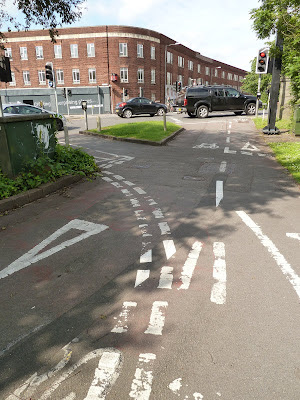 In the photo above, the camera may be taken from a path to the right which has priority over bicycles coming from the left or far left. But look at that far left approach it's on the wrong side of the pavement. And the oncoming route is meant to give way -but give way to what? 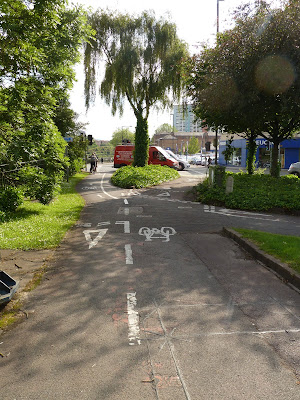 passing cyclists seemed to go by with no  respect for the rule of the highway code at all.
Posted by Bristol Traffic at 20:13 No comments:

Nice to see the new residents of this Hotwells restaurant, Cherry Picked Catering, have managed to find a good buildout for their van 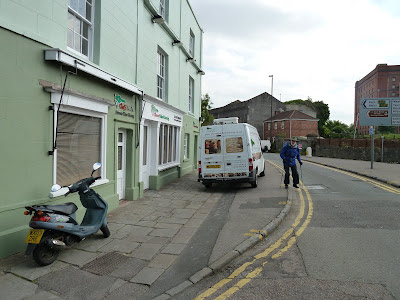 We are concerned that the pedestrian needing two walking sticks to walk past it may inadvertently scrape the paintwork, but as they selflessly went onto the road, this risk was transferred to oncoming traffic instead.

Posted by Bristol Traffic at 15:03 No comments:

Hurlingham Road -we have lost the battle 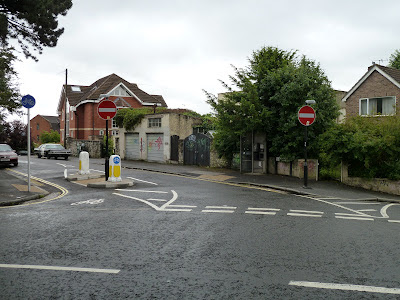 The presence of a cycle contraflow shows that this was put in by an anti-car council. Is it a coincidence that the councillors for the area are Jon Rogers and the green councillor Gus Hoyt? 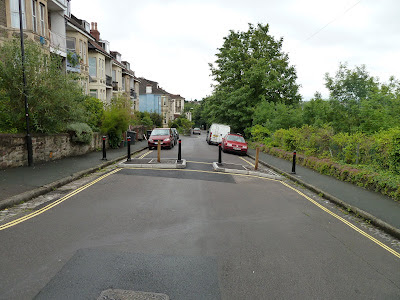 They've even put in double yellow lines at the new parking bay.


We also hear of a petition for a safe pedestrian crossing on Ashley hill, which will add even more delays on our journeys.

When will this outrageous war on motorists ever end?

At least central government is on our side -but what use if that if road-by-road, the rat runs go away. This is even more insidious than 20mph limits, which you can ignore completely if you are on a hurry. This is total rat-run theft.
Posted by Bristol Traffic at 09:30 1 comment:

Brent -what are the cyclists complaining about

On our london trip to the Zil Lanes, we spotted in Kenton this segregated cycle lane 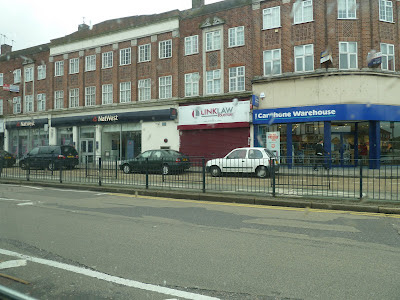 The barriers keep the cyclists safely separated from the moving cars in the foreground, and the dedicated shoppers parking lane and parking area behind. We can see they improve safety by the way that 80% of the barriers are bent or bashed -that's a lot of "cyclist hit a car" incidents that have been prevented. 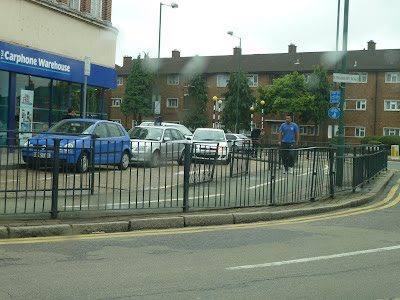 Yes, for the 30 metres of this path, the cyclists of Brent have nothing to complain about 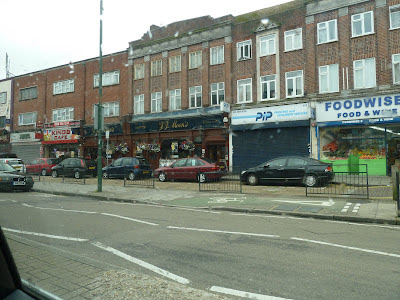 If we had an issue, notice in the left of the photo how there is a car parked up against the cycle sign. The addition of a pedestrian crossing and cycleway stops parking on the through-traffic lane, so reduces  the parking capacity of this shopping street from four cars in parallel (there's the other side of the road), to two cars. This is exactly the kind of anti-parking measures that are leading to the death of traditional high streets such as this.
Posted by Bristol Traffic at 10:00 No comments:


We are happy to declare the whiteladies road showcase bus route a success.

Before, parking here on whiteladies road was forbidden, because it had zig-zags. Now it is somewhere you can park during rush hour. 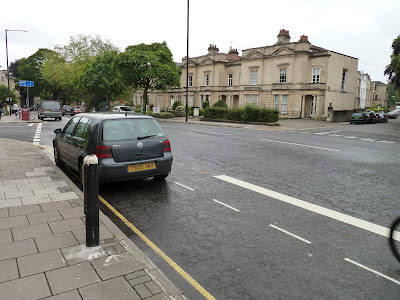 This is because the parking restrictions are not live until the signs go up-until then buses and cyclists get to go down the single lane, while we can park there all day. 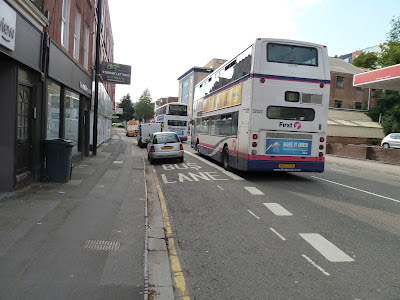 Apparently this enlightened state of affairs will last another month or two.

Posted by Bristol Traffic at 07:30 No comments:

20 mph! for the whole city! Disaster!

Terrible news reaches us: the council has voted in 20mph speed limits on all residential roads in the inner city.

This is heartbreaking. It doesn't actually mean much as the only time you can put your foot down is in the 11pm+ "minicab hours", where 40mph is the defacto speed limit -but it's the thought that counts.

This proposal is clearly pandering to the people who live in the city, at the expense of the commuters from the edges of the town, from North Somerset and South Gloucestershire. Those people, the wealth bringers, need to drive in to the city in their status-vehicles, and now have to face a council even more war-on-motorist than before.

Why do the councillors choose such a short-sighted policy? It's because of the forthcoming mayoral elections. The wealth bringers outside the city don't have any vote in the election, so their needs can be ignored. Such a plan can only bring financial disaster to the region.

One councillor, Peter Abraham, has been bold enough to stand up against this, "it will cause frustration to motorists" he says, before slipping the code-phrase "driving at the right speed for the right conditions". This is the secret handshake of ABD, just as the phrase "indigenous people" is to the BNP.

Sadly for Peter Abrams, the ABD are as completely out of touch with a modern city as the BNP are. Look at our previously documented video of the 20 mph zone of Montpelier:

The frustation that YY03YGM, experiences is not the 20 mph speed limit, which they manage to get past while overtaking the cyclist. No, what is frustrating is


These are the problems. Not the speed limit, but the way it encourages people to walk, cycle, -even play in the streets. This is the real problem. It downgrades the residential streets from "rat runs where the right conditions are 30mph even through corners" to "quiet roads where people are walking, cycling and playing there as if it was 1908 and cars hadn't arrived; a country where people driving are viewed as unwelcome invaders instead of an essential part of the life of the city".

This is exactly what threatens us. When the council says "encourage walking and cycling", it means "encourage anti-motorist activities in the city".

As Peter Abraham says, "Are we going to harass the motorists every mile they drive?"

"P" sends us a pic of a G4S van KJ05MZP in Cardigan Road Henleaze, neatly paveparked by double yellow lines.: 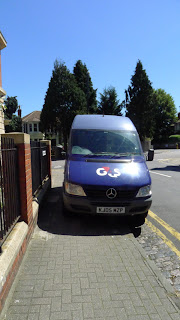 G4S have been receiving a lot of bad press these days about security and safety at the olympics. It is nice to see that here they are making sure that no pedestrians on this pavement will be hit by fast moving cyclists -as all cyclists will be on the road here.
Posted by Bristol Traffic at 19:41 No comments: