Someone called, entertainingly, Pointer2null , comments on one of our 20 mph posts and argues that:

Because VW cheated its customers and governments round the world, we need a 30 mph limit.

It's the pollution, you understand.

He cites two papers, so let's look at them.

An evaluation of the estimated impacts on vehicle emissions of a 20mph speed restriction in central London, City of London Study,  2013:


Average speed models suggest that a lower speed limit in urban areas may result in higher pollutant emissions. However, the stop-start nature of traffic in central London means that such a method may not be suitable, and further investigation is required.

That's the scientific way of saying "its the acceleration from 0 mph that uses fuel, stopping wastes it —so simple models of constant speed are unlikely "may" to apply. Give us some more money and we'll tell you. Actually, the VW debacle has shown that some real-world experimentation would be the strategy. Fit a car with the sensors, drive round an area the month before a 20 mph rollout, then the month after -and see what changed. Back-to-back tests should be relatively accurate, though term-times and weather patterns are factors to consider.

Looking at both the 30 mph and 20 mph modes, they noted that in a 30 mph zone more time was spent accelerating (==higher RPM), while the cruise at 30 mph may more fuel efficient, its not there for very long. with slightly different roads in the study at 20 & 30, you could argue about whether the cruise and acceleration profiles would be the same at 20.

They then go on to conclude
Pollution metrics were taken off stated manufacturer levels, so, as we know: massively underestimating the pollution of the diesel fleet, while much more accurate for petrol. This means well have to discount one paragraph

This isn't a paper, more a press release. You can see it in the headline, Lower limits can increase fuel consumption and CO2 emissions. Scientists would be more circumspect, and use the word "may" in their work, especially for one single experiment.

The article is about an AA field test measuring fuel consumption in petrol vehicles. Like the CoL paper, it calls out stop-start driving and implicitly the acceleration profile, as the real killer:
It doesn't look at diesel, and the initial measurements are from the steady state "driving at 30 with no traffic jams". The Millbrook Proving Ground they mention does have a "city track",  hopefully that was the one used. A real paper would provide such information.

What it shows is that speed bumps are the enemy of breathable air. The fact that the Bristol rollout doesn't have them, must therefore be viewed as a good thing.

Comparing the AA press release with the CoL study, it is the CoL one which is scientifically defensible. They discuss the experiment in detail, how they cleaned up the data, the maths to reach the conclusions. And even in the conclusions they state their uncertainties. They are scientists? The AA: an organisation which came to the experiment with an expectation of what the answer would be, ran a field experiment which is unlikely to reflect an inner city, didn't describe that experiment very well —and came to a simple headline conclusion which failed to represent the uncertainties in the findings.

Were that to be be a paper submitted to the Bristol Traffic review team, it would have been rejected due to lack of scientific rigour.

PointerToNull, reads them and comes to the conclusion:


It's all over the news today - the NO2 figures for diesels has been faked. So this make the decision to force all petriol vehicle to observe a speed that INCREASES NO2 emissions by 8% even more short sighted (this is a measured increase by the study and not a claimed one by the makers). Given the state of diesel, petrol will probably be the dominent fuel and so in a single stroke of stupidity, all the gains made by better engine technology in petrol vehicles over the last decade has been wiped out. To press the point, the number of people who will die from air pollution will increase more than those who are saved by slower vehicles.

We're not going to disagree with anything here. They (he? she?) focus on the better of the two papers, and while skipping the "more data needed" bit of the conclusions (academics like that, it's how they get more money), makes the case that speed limits should be driven by what is optimal in terms of pollution profile.

This is a dangerous argument to use. Why? Because to say "we must choose our speed limit by optimal CO2/NOx levels", then you have to be pushing for the motorway limit to be 60 mph. Fuel economy drops significantly after that, and pollution levels increase.

Anyone advocating 30 mph urban for the sake of pollution levels, must also advocate a 60 mph limit, else they are picking data to suit their opinions.  If you did care, you won't drive short distances on cold days, or when pollution levels are already over the limits.

Then there's also the painful fact that inner bristol's air pollution levels are beyond the legal limits, even before the 20 mph rollout, and includes the M32 corridor. 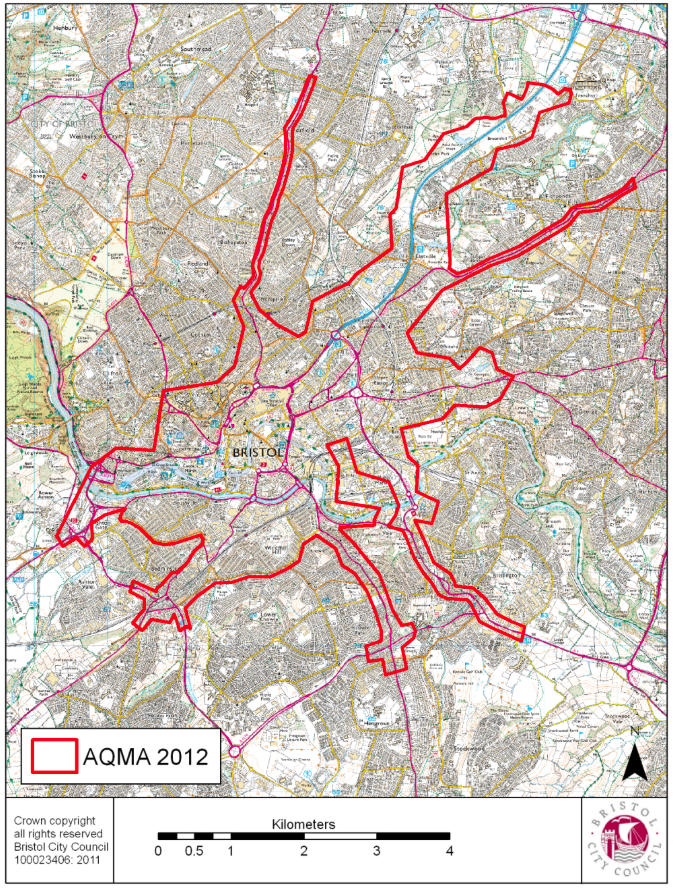 Leaving the limits at 30 mph would have done nothing to address this problem. And while VW and friends were promising to everyone that all they had to do was wait for the Euro6 rollout, that's not going to cut it either. Which means we'll have to try other things.

The goal of the 20 mph zone is to get more people walking and cycling, not driving their kids to school in turbo-diesel cars. Then if we can get people in the core to not drive on short journeys, potentially increase traffic flow overall.

The future of urban cars is probably hybrid, maybe electric, though the economics and logistics are still dodgy there (expect some post on Tesla vs Google soon —TL;DR you'd have to be driving a lot for a Tesla to make sense; if you buy one you almost want to drive more to reduce that cost/mile). Certainly we don't need to be looking ahead to city centres with diesel, because dieselgate may be the trigger to accelerate restrictions or C-zone charges for them in Bristol, possibly starting with the RPZ.


"the number of people who will die from air pollution will increase more than those who are saved by slower vehicles.

This is potentially -and terrifyingly- true. But the response to NO2 problem should not be 'let's have 30 mph limits in town', because that will not address:


To close then, we congratulate Pointer2null for digging up an interesting paper on the impact of 20 mph limits on city of london's pollution levels, and may email the authors asking for any planned recalculations.

Assuming that Pointer2null going to become the city's advocate of pollution-scient-driven-transport policy, we also hope to see any papers they can now dig up on effective speed limits for fuel economy and pollution on motorways. Now that £80M has been spent on the Managed Motorways, it would now be possible to drop the speed limit there on high-smog days. Having some insight into the effectiveness of this would be something to help shape regional transport policy.
Posted by Bristol Traffic at 11:59 3 comments:

VW TDi rigging: —but why?

The VW TDi rigging story is pretty serious; it's the third big automotive software disaster —and we haven't even covered disasters #1 and #2 yet.

Which are, for reference:


Now, one of our team members does own an (ageing) VW TDi barge, and while it is frugal —even at 20 mph, we add—, it has some limitations, specifically it is a lot less responsive than the VW Passat 1.8T "wagon" which used live in the double garage up in the Pacific North West. That car had a ski box in the roof, Z-chain snow chains in the back and the ability to make it from that garage over the mountains and into in he car park of the ski resort in 2h30, —all for less than $20 of "gasoline".

Because that is the surprising thing about the US adoption of turbo-diesels: from an EU perspective, the US give away free fuel to their citizens.

Being evidence driven, here is our evidence, a receipt from ten-days into the Bristol-Traffic-strategic-meetup-with-the bay area self-driving-car/police state manufacturers. Driving, for reference a VW Jetta 2.0 16v petrol engine with automatic transmission rented for $250/week.

This is for seven days worth of commuting across mountain view, 30 miles a day,  plus the weekend leisure activities silicon valley is famous for (going to shopping malls and buying new apple hardware in the belief it will make your life more satisfying).

58 pence/litre? And people think the fuel economy of that car was so bad that they had to switch to a TDi model with higher economy. That is, they felt "gas" was so expensive that they had to pay a premium for an engine with more cabin noise, bounces up and down more when you are trying to text at traffic lights and whose overtaking ability, once you consider the gear-drop and turbocharger spinup will only take place once you actually hit the accelerate pedal, isn't actually that good. In contrast, a petrol Jetta is, compared to a UK petrol-engined Golf, half the price per mile and equally nimble, albeit somewhat crippled by its saloon-car design preventing it being so good for throwing things in the back or for parking in smaller spaces. You would have to be doing a lot of long-distance driving to actually justify swapping the petrol engine for the diesel turbine.

That's what VW managed to pull off with their software: not the rigging of the emissions —but the convincing of the US customer that they'd actually have a better time in a Turbo Diesel.
Posted by Bristol Traffic at 10:29 No comments: