The Centre: East to West: From Mediocre to Dangerous

Following on from our trip across The Centre from West to East, here is the west to east experience.

Heading up Queen Charlotte Street from Queens Square, we first get to see a near-collision between a deliveroo rider and a small child running out from the side. It's possible to conclude the rider doesn't have a small child, or they'd have known that trying to control one is futile: asking the parent to do so even more so. "Fuck off you wanker" is the correct response here.

Then it's left onto the half-of-Baldwin Street path. A lot of people accuse Ferguson of following some anti-car, pro bicycle policy. Well, this is the main legacy of his of his reign from a cycling perspective. London also had a mayor prepared to sacrifice the country in his ambition to become PM.

The Baldwin Street path starts of as a reference example of what modern thinking on segregated cycle routes should be: not just a safe separation from cars, but a clearly delineated separation from people on foot, the bikes not having to weave between people -better for all.

It then switches to being a reference example of what you expect to see in Bristol: the bike path suddenly gives up in order to have some car parking, before ending up at some lights. Here the other tax-dodger decides not to stop for the lights, so proving that we do show such events when they happen. Its notable that actually he had less to worry about across the junction than our reporter, what with the past-the-lights taxi and the van swerving over to pick up a mate.

On to Baldwin Street, and what do we see?

Overall then: 35 points of good,  -25 points of work-in-progress points (the chaos, the bunny hop, the bike path. And -60 points of fundamental structural flaws. A mishmash of walk/cycle routes with artistic tiles providing now cues as to where a bike should go, so hard-coding conflict into the centre at the cost of some premium tiling.

This was done by someone who wants "an urban realm" design, despite the fact they've just added a new road and bus line through the heart of the area, someone who doesn't actually want bikes there and finds the idea of having a functional way to get across by bike unsightly. It is, to use a technical term, "bollocks".

the worst part is probably the approach to Colston Hill. Until recently, there was a road entrance there. All they had to add was a sign and some build out to narrow the entrance. Everything else was in place. Except they spent money on adding a new pavement and some tiles, and in doing so removed the option of a safe exit. Now all private vehicles on that road will be entering or exiting Pipe Lane: a road where the road signage has been changed so that Colston Street has lost the right of way it used to have. This is now dangerous.

Posted by Bristol Traffic at 22:58 No comments:

Cllr Richard Eddy is apparently refusing to visit Colston Hall, once it's no longer named after someone who'd be on trial for Crimes against Humanity were they to attempt the same business today. 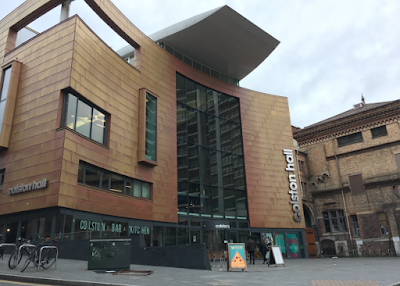 Because yes, it's named after Bristol's most important slave trader, and it's something the city should recognise is an affront to the rest of the country. Naming a prestigious building after a slaver may have been considered socially acceptable in the Victorian era, but we've moved on: time for the city to. That includes the two Colston Schools, the various roads, an ugly 1970s tower block and other bloodstains round the city.

What the renaming has shown up is how controversial the topic still is: from polls in the evening post, to articles in the "foreign-interference in the UK election national press", condemning "political correctness" for this historical revisionism. Well, yes, celebrating slavery is considered "politically incorrect" these days.

It's interesting what it's thrown up through, not just the view of it as a left-wing/right-wing split, but it can also be seen as a Bristolian vs "newcomer" split, with "Bristolian, born and bred" being a code-phrase for "not from London". Well, it's easy for people to feel defensive, but really changing the name of the hall isn't an attack on Bristol, it's moving the city on. Or, as The Bristolian notes: nobody has ever cared about what happens to parts of the city that aren't associated with it rulers, be it schools across the city, the river the M32 was built over, or any bit of greenery that doesn't have the word "Clifton" in its title or address. For people who want to know a bit more about these topics, consider the Bristol Radical History group.

We have some good news here: Colston Mini Mart still stands strong against this wave of political correctness

People don't appreciate this, but Colston Mini Mart has an important role to play in the city. It is the nearest place to the Bristol Heart Institute where you can buy cigarettes. You don't appreciate this until you're stuck in there for a week, the same wrist band giving you a wifi password marking you out as someone the door staff won't let out. You're reduced to texting friends and family to visit, bringing up with them a double latte from Costa and a pack of silk cuts. Then you can sneak out after hours onto the balcony and have a quick cigarette while sharing anecdotes of heart bypasses. Nothing to smoke and the remains of your life may be longer, but it will be more painful. 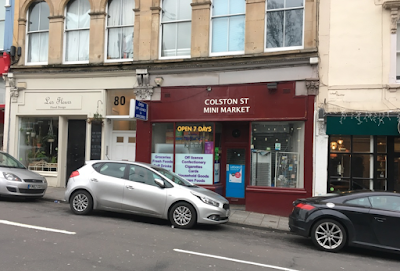 That's what we all have to look forward too. All that we get to choose is: do we get anything from the Colston Mini Mark on the way out. Here then, Richard Eddy will be able to go out with the rest of the city.
Posted by Bristol Traffic at 23:25 No comments: