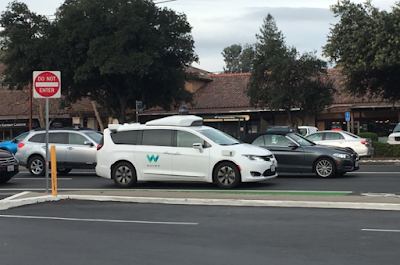 For now though, let's add Elaine Herzberg to the list of people killed by cars. She is one of the few to get a mention beyond the local press. That doesn't make her death any better.
Posted by Bristol Traffic at 21:47 No comments:

It was pretty chaotic night out there. On the one hand: almost no traffic. On the other, an Audi A3  trying to get up a slight gradient and stuck wheelspinning. After about 15 minutes people start looking out the window thinking "maybe should help", after another five minutes they open their doors, get out and start pushing. Who says there is no camaraderie between passengers in Audi and the driver?

As the residents are all staring out the window "will they fucking get a move on", the passengers help turn the car round so its weights on the front axle, and it manages to get another 15 metres up the hill before being abandoned. Hopefully BCC have suspended overflights of RPZ enforcement drones for the next few days.

One of the wierdest things was the fact that everyone was driving well below the 20 mph limit. This completely throws off your decision making as you think "I'll wait until they get past before pulling out", and yet they take so long you think "I'll just pull out in front of them". It's the Audi/BMW driving experience on a push-bike.


All mini-roundabouts, give way signs and zebra crossings are suspended, and you can stop in the middle of the road to talk to people. Not different from normal, except now you have a better excuse when challenged than "fuck off"

We considered setting out to a nearby pub on the off-chance of getting snowed in and trapped for 2-3 days. But which one?

Anyway, that was friday, what about today?

Rejoice! Today is a day is a great to be smug!

Because yes, those of us who have the equipment to get round can go round, offering smug advice to everyone trapped.

Drivers of 4x4s and SUVs

Landrover Defender drivers have it easy today: that rickety thing they've kept alive through trading bits on ebay can now be used to cruise round the city. Wearing wooly hats, fingerless gloves and warm clothes obviously, given that class of vehicles' heating system.

Urban SUV drivers have a similar option, but need to be careful. Today may be the day that you can finally justifying spending £15K on top of a practical car..

Do: drive round, nodding knowingly at other SUV drivers.

Don't: discover when you get to a hill that you only paid a £12K premium and so have the 2WD model.

Do: use engine braking on the descents. If your car is an automatic, time to work out how to put it into manual mode, or try the cruise control.

Don't: discover while driving down one of the steep hills in Totterdown or Cliftonwood that it doesn't make a difference between 2WD and 4WD when it comes to using the brakes. No winter tyres, sliding into parked cars screaming.

Owners of cars parked on hills

It's too late to move them unless you pay your neighbour with a landrover to tow them somewhere.

Do: sit by the window, looking at your car, camera in hand, ready to jump out and take pics of whichever 2WD SUV drives into the side.

Don't: own a car of any net value.

Do: cycle round offering smug advice to people trying to drive up and down hills.

Don't: get off and help, admit that it doesn't work and then, while pedalling of shamefully, wipe out on a patch of ice.

Do: walk down the middle of the road. Its the only bit which will get gritted after all.

Don't: look at your phone while walking round. Not today.

Don't: walk round with your hands in your pockets, in case you need to put them down when you slide out.

Skiers
Do: get out the skis you've kept under the bed for a decade, carry them to some hill and ski down.
Don't: go on about it for years in any of the pubs our team members frequent We don't care, really.

We want to have a special call-out to mid-life-crisis mountaineers, the ones you see out in Gloucester Road or Southville of a weekend, wearing a down jacket branded with North Face, Patagonia or Mountain Equipment,

Do: get out the most excessive bits of equipment you have in an arms race with all the other mid-life crisis mountaineers.

Do: walk around being smug, especially on the deepest snow parts of the pavement, rather than the middle of the road where it's clear.

Do: remember that if you wear crampons, walk with  your legs wide apart so you don't step on your own toes.

Do: talk to random strangers, casually dropping phrases like "hut-to-hut through the Haute Savoie Alps" and "New Zealand South Island trekking", or even better, "Everest Base Camp"

Don't: get out your stuff to discover that since you last went near any of those places the plastic boots have gone brittle and failed. 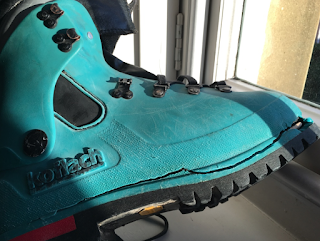 Well, with an equipment failure like that, its trapped in the Farm Pub. We just wish that skier would STFU or we'll have to start looking for those nail clippers