The Bristol Traffic team has actually been on a council-funded trip round the world to see what ideas we could adopt in the city to make it more successful. Finally, after months of first class travel and hotels, we have found it -in Portland Airport.

Portland is a relatively small city in the US; less population than, say, Glasgow —and doesn't actually merit an acronym or nickname the way, say 'NYC, LA, Vegas" and others do. Instead it tends to adopt the initials of its airport, PDX. Bristol is similar, except most people in the UK don't know the initials for Bristol International Airport, BRS. Well, use it enough and maybe they'll learn.

Anyway, the first thing you see thing when you get off your plane in PDX is the signs towards some bicycle assembly area. THIS IS NOT WHAT WE ARE ADVOCATING. 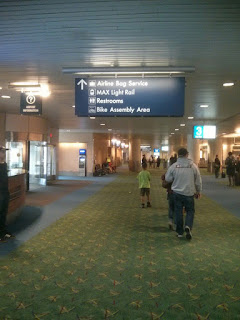 A bike assembly area in BRS would only go in if the airport could charge cyclists for using it —and they could only do that by making it illegal to assemble your bicycle near the airport. They'd probably just make it illegal to cycle to it, just as LHR have done by converting the cycle tunnel to road traffic and fining anyone who cycles down it.

No, what's of interest to us is the sign 180 degrees behind the camera here, the one at airport security 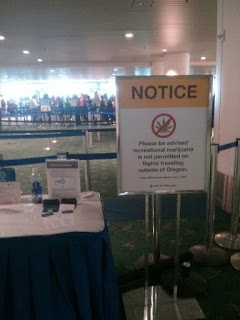 Please be advised recreational marijuana is not permitted on flights travelling outside of Oregon.

That's a bit late to see that sign; there isn't one when you load a 14 kg rucksack in as hold luggage, and it is clearly one with implications. If they have to have a sign saying "you can't fly outside of Oregon with weed", then by implication "if you are flying within the state —you can". And they are right.

It is now legal to grow 4 ganja plants of your own: provided you live more than 1000 yards from a school. Imagine that —people would be looking at the catchment area maps of the city to make sure they weren't living near a school; it would turn the current game on its head. House prices would actually go down the closer you were to a school.

It even complicates the university: should their agriculture department start projects to advise farmers on the growing of industrial scale marijuana? Some proposals are on hold because it conflicts with federal funding, and despite the enthusiasm of graduate students to study for a PhD in Marijuana Agriculture, the existing farmers have many years of experience growing weed. All that is happening now is the farmers can do it in public and pay income tax.

Because that's where things are going: industrial scale farming for selling in California and Seattle. It's now got a new problem for the city: how to manage the planning permissions for where to grow and process this "new" commercial product. 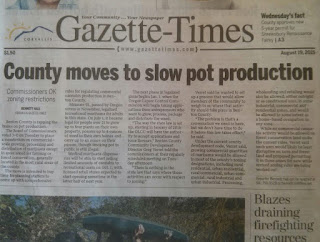 It's actually been an open secret in the state that weed was the big rural earner with the demise of logging; it battled with Intel x86 parts for maximum income and profit margins —it just wasn't something that could be discussed publicly. And, unlike CPU foundries, it's something that those towns whose livelihoods had been destroyed by the end of logging could take up, more reliable income than tourism, and generally a wholesome product people could enjoy,

Imagine if Bristol legalised the recreational use of ganja, the growing of plants, and in N. Somerset, full scale agriculture.

It would transform the city!

We would become the powerhouse of the south west, one to rival London! We'd get visitors from all over the country to spend a weekend —and Weston super Mare would become Britain's most popular summer holiday destination.

As the ganja industry grew, North Somerset would move beyond a dormitory county for the city, to one where people would commute too from the inner city, to help "work the farms". Oh, and then there's the pick-your-own harvesting event, which would be a national festival.

And of course all this will bring in money: the tax from the plants, the income tax from the staff, staff who will be earning more than minimum wage as they bring the skills acquired over the years to full use. All those visitors, those tourist events -more money, enough for Weston to move beyond Dismaland as a national tourism event. And all the town will be outside on a sunny summer evening, lighting up in the parks, turning up the sounds of Bristol music, and getting stoned of our heads.

How about it then, prospective candidates for Bristol Mayor? Who is going to look at the lessons from Portland, Colorado, Seattle —and campaign on a "legalised marijuana industry for the greater bristol area"?
Posted by Bristol Traffic at 18:55 No comments: 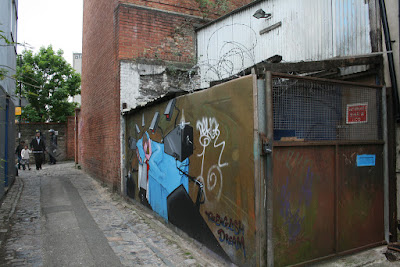 Meanwhile, your civil liberties have been suspended for the duration of the emergency.
Posted by Bristol Traffic at 14:30 No comments: