At last this blog appears to have been noticed.

Not in Bristol, where the council still pretends to be cycle friendly, but by Surrey County Council, who take driving very seriously... especially the school run...

"Following a parent-governor meeting at North Downs Primary School last Thursday, headteacher Angela Ewing said its Betchworth and Leigh bases would be "driving only" from September."

You can read the full details here:

We admire this school. Pro car, anti-cycling or walking. THIS IS THE FUTURE! And all because they took notice of Bristol Traffic. Also we salute the fact that, across the country, Councils pay £700 million each year to pay for Taxis to take children to and from School. This is a fantastic introduction to Public Transport, and whilst taxis are only for poor people, at least they look like cars, not those hideous buses that get in our way.
Posted by Quercus at 07:00 2 comments:

Some militant cyclist, bristolcyclista, sticks up a video of a journey so uneventful it doesn't merit a mention:

Except, by putting up the video of the car F54NWG, the driver has found a photograph of themselves swearing at the tax-dodger.

Needless to say, this persecuted driver has reacted in the only way left: to complain that placing the video up is a privacy violation, to which youtube react by blocking the video. There's now an updated one with the face blurred out.

The cyclist claims as now that you can only hear the abusive shouting from the passing vehicle, it is hard to identify the driver. Consider this. How does "bristolcyclista" know that the driver doesn't shout and swear like that to everyone? His family? His friends? Anyone he works with? Now anyone in the area of Parry's Lane -that's Stoke Bishop, an "under-documented" region- who has someone walk up to them and shout abuse will know "hey, that's the man in the F54NWG youtube video".

We know that he's been persecuted by the way that he found and complained about the first video. Perhaps he's felt it necessary -as we have been- to create a google alert with our registration number in, sending us an email when yet another video of our driving appears on line. Alternatively, someone who knew him saw the car, heard the shouting and thought "I know of only one person who swears at people like that as they drive a silver car" -and broke the news. At which point the driver and his acquaintance now know what his driving standard is.

Google's paper, Building High-level Features Using Large Scale Unsupervised Learning, [Le 2012], showed how they ran an image-feature identification program through still images, each of which was taken from a different youtube video. At the end of the exercise, the computer could take any image and categorise it into "face","body part", "cat" or "other". We suspect that before long, that program would start to recognise from-bicycle driving videos. If that's the case, youtube could just use it as part of its upload process: to identify all cycling-troublemaker videos and then refuse to accept them.

It's only through the application of such technology that our right to drive how we want can be preserved.
Posted by SteveL at 09:36 1 comment:

Some people must have seen our post and and an estimate of 30-40 bicycles an hour and peak times and thought "so what?

This is what. This is the bike path that the petitioners harassed the Elf King himself, about, the one in jeopardy, the one he said should only be built if the sheep used their existing cycle paths. As far as Flax Bourton is concerned, using those cycle paths is bad enough. When this route is finished, their quiet life will be destroyed. 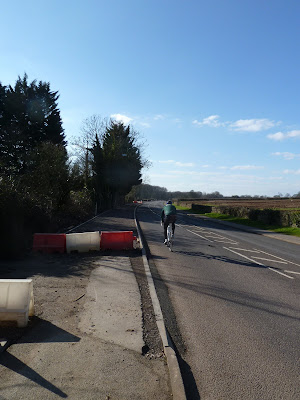 Look at it. 3-4 metres, wide, already built out, with the trees cut back. Raised enough to make it hard to swing onto. And already being scoped out. 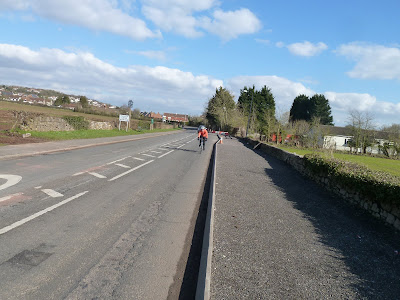 The narrowing of the road means that the paint between the the lanes will be removed, forcing us to drive slower. If the 50 mph speed limit is dropped to 30, that will add another minute to the Flax Bourton to Long Ashton school run, again, threatening a lifestyle people paid into. 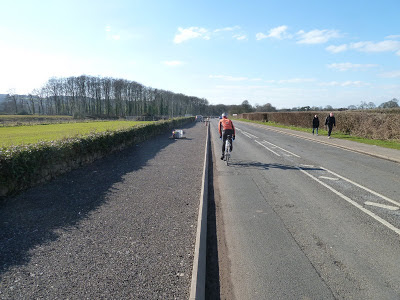 Look at it. Our tax money. It's on the opposite side of the road from the footpath, so there won't be "badly behaved cyclists" "riding on pavements amidst pedestrians". No, they will be cycling as fast as they do now -sprinting to and from Backwell, on this new £1.2M route running parallel to the A370.

Every one of those cyclists could endanger a motorist.

The Elf King said he wouldn't pay attention to petitions from people outside Long Ashton, pressuring him to build this blatant war-on-motoring facility. Well, he caved in. Hopefully he'll listen to the next petition, from local folk.

This is what we want!

Posted by Bristol Traffic at 07:26 No comments:

The festival way: exposing Long Ashton to the city

Why all of a sudden the problems? When the Flax Bourton to Backwell route has existed for over a year? It's this: a wide bike path from Ashton Court to the western end of Long Ashton. 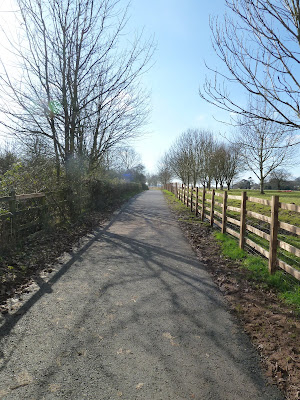 It runs parallel to the A370, it doesn't have the cars or buses of the Long Ashton road, and even runs alongside the schools. 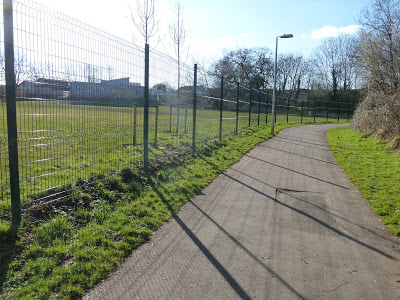 It's designed to give the cyclists an A-road of their own. And because of that, they are coming out. Which is making Flax Bourton suffer.

Back in September, Elf King Ap Rees, leader of the Somerset-Elf-Folk, said "We're spending all this money on cycle ways and yet I'm always getting complaint that say the cyclists don't use them -they use the roads instead!".

It turns out worse than this. Some of the cyclists are using the cycle ways that they spent all the money on -and endangering people by doing so.

When we visited Rosemount Road on a (sunny) February sunday, we saw three cyclists in the space of five minutes. At that rate: thirty six an hour. Thirty-six cyclists that are cyclists are "posing a danger to pedestrians and motorists". And behind it all -the council trying to change the residents behaviour, to make them cycle with their families to school, then on to the city.

"The issue for residents is safety as the route follows narrow roads through the estate with the longest having no pavements.

"There are at least three blind corners giving no visibility for motorists, cyclists or pedestrians and there have been several collisions and many near misses involving cars, pedestrians, children and cyclists."

He added: "We are not anti-cycling and many of us enjoy cycling."

We have some bad news:  if you think it is bad now, it will only get worse.
Posted by Bristol Traffic at 08:00 4 comments:

The residents of Rosemount Road, Flax Bourton didn't just move the countryside for fields and trees.

They moved for the rural dream: a cottage like house with room for two cars. One for one of the parents -and in modern society, that could be the dad- to drop the kids off at school in Long Ashton before driving into the city; the other for the other parent to go straight in down the A370, via a short stretch of road. 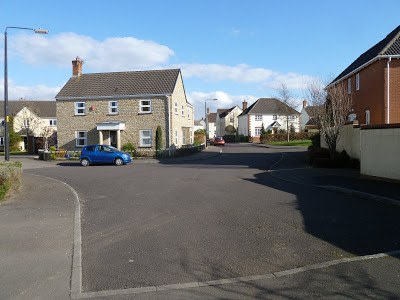 Already Bristol city threaten this dream, with their war on motoring. Closing Prince Street Bridge to through traffic makes getting from the south of the city harder. Imposing 20 mph speed limits in South Bristol has killed the rat-runs, leaving only the traffic-clogged Coronation Road. Adding residents parking in Redcliffe has even destroyed some of the near-city parking available to Somerset commuters.

All this was bad enough, but now the city is bringing the war on motorists to the villages!

Look above: a nice cul-de-sac; lots of space to turn around in.

But turn 180 degrees round and what do you see 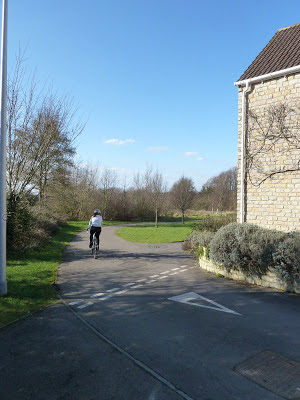 That's right -a bike route. Going all the way from Flax Bourton to Backwell. And its used! You can see above, that even on a February weekend there is someone out there pretending to enjoy themselves 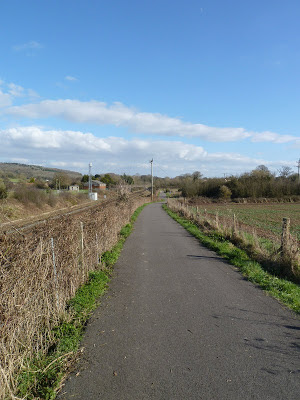 Look at the quality of it! Can you not see what the council is trying to do here -it's not just encouraging cyclists from the city to come out, it's trying to change the behaviour of the residents themselves! It's trying to say "why drive? Why not cycle to Nailsea and get a train into the city or Abbey Wood at the North Fringe?" It's saying "why not go for a bike ride -for fun- with your family on a weekend?" It's saying: you should consider cycling to work in the city 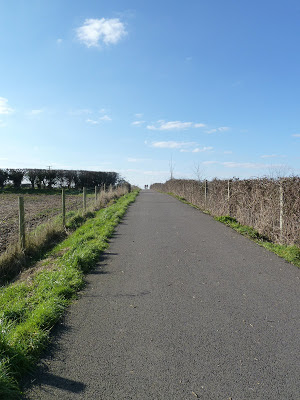 In the distance, you can see them: the cyclists. They are coming.

This is why the village has to act. If they do not, they will be turned into the mindless Dutch-style families that Bristol is trying force down our throats.

If they wanted to cycle, they'd live in Southville or Montpelier! Instead they chose to move out here, to realise a dream of a quiet road, two cars, and a drive down the A370 every morning. All this will be destroyed by the council -unless they can persuade the council to change its mind, and ban cyclists from these roads.

"we're not anti-cycling, but" -flax bourton joins the bikelash

This site has been quiet recently -but then our business model isn't based on having a high visitor count and then selling adverts to advertisers who want to sell things to those people who visit the site regularly (i.e. losers). We haven't been visiting the evening post much either, not since they started demanding access to the contact details of all gmail accounts.

Today though, something draws us in again: the bikelash is back.

The last decent bikelash we had in the area was in Long Ashton, where the Elf-King himself proclaimed that cyclists were arrogant and that trying to petition him to complete a bike path was sheep-like.

Yes, in a picturesque modern rural housing estate, residents are warning that cyclists are a risk to pedestrians and car drivers!

Here is the area.

Rosemount Road is a classic example of a late twentieth century, early 21st interpretation of that rural dream, a country village.

In the background, the birdsong-like hum of the A370, offering the elf-folk access to the city, or Bristol airport, if that is their place of employ. (some day we should cover the airport. If it weren't so anti-all-other-modes-of-transport, including flight, we'd accuse it of being at war with motorists). 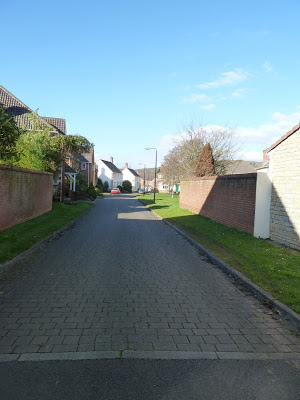 Like a traditional village, there are no pavements, just verges to drive over and so justify the 4x4. 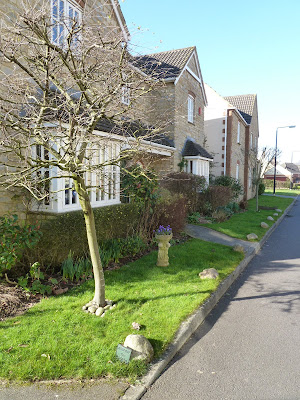 Like a tradional village there is always somebody petty with a keep of the grass sign and stones to mark their territory. 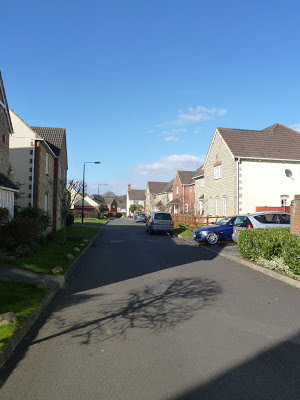 Unlike the city, there is room for more than one car per household. And, when washing your car on a Sunday afternoon, you can leave the door open without fear that your car will be stolen and the insurance company laugh at you for doing so. 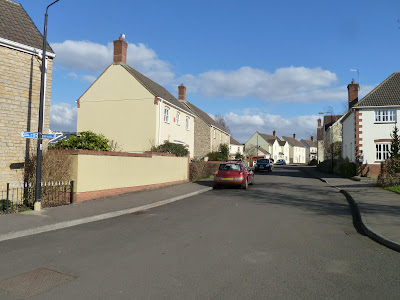 According to Zoopla, these houses sell for just under £500K, money well spent to get away from the city and its stress.
In these quiet cul-de-sacs, there is enough space for children to happily bounce and scoot around without fear of being killed by a passing bicycle.

But not anymore. Not now that Somerset council is partway through bulding a quality off-road bike path all the way from the city centre to this rural dream.


They are trying to bring the city to the countryside, to destroy the rural commuter lifestyle these people have worked so hard to attain.

This is the front line in the Bikelash!

Posted by Bristol Traffic at 19:34 No comments: