Very often people who park their vehicles in mandatory bike lanes are accused of being lazy, selfish and of endangering and inconveniencing cyclists. This may be the case sometimes, but it is not always true, as shown here in Grove Road, Redland 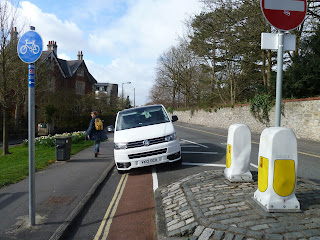 As you can see, it is possible to safely negotiate the junction

the cyclist may be left facing oncoming traffic where they appear to have just popped out from behind a van, but as this is part of the Sustrans NCN4 route, who doesn't want a frisson of excitement before the dullness of the Railway Path?
Posted by Bristol Traffic at 17:28 3 comments:

We're going to point people at this lovely bit of pave on Moon Street, parallel to Stokes Croft. 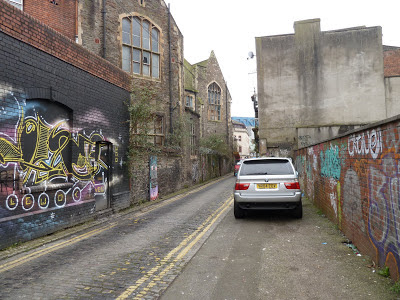 because the road is a "Shared space" along which people walk, this pavement is safe from anyone scraping their pushchairs against your paintwork.

Recommended.
Posted by Bristol Traffic at 12:07 No comments:

Up at the top of St Michael's Hill, the BRI Physio department now has a stock plastic covered warning note to put in car windscreens -here AP03AVB.
- 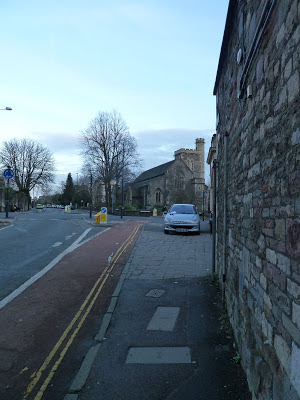 This is a polite notice to make you aware that you are parking on the pavement. You are obstructing the pavement. A member of the public has complained as there is not enough access for pedestrians and especially wheelchair users. Where you are a member of staff at Hampton House or a member of the public, it is in your interest to move the car as soon as possible and not to park here again, otherwise you will be fined either by a Traffic Warden or Security. 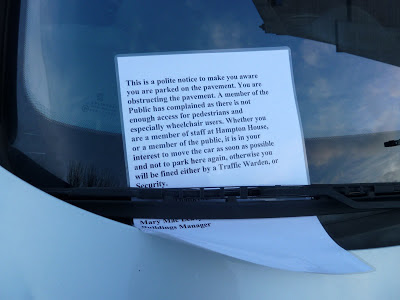 All this, because "a member of the public has complained"? One person? Why should the wants and needs of one person outweigh the needs of the many who need somewhere by their hospital or place of work? And look, there's plenty enough room for someone on foot to squeeze by. 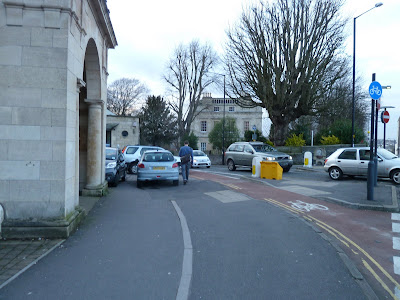 we're also going to pick up on the "fined by Security". It's a public pavement. BRI security have no right to fine anyone for parking on public pavement. Private pavement, maybe. But not the public highway -or the designated parking areas alongside
Posted by Bristol Traffic at 08:03 No comments: