There's an article up on the evening post saying for the first time in a generation, a majority of people are using either buses, bikes or walking to work instead.

This is fascinating. Too bad there is no coverage of the methodology of the survey other than it's "a survey of the commuting habits of thousands of city residents". How did they conduct this survey? A random call of Bristol numbers? Did it include s survey of the rural backwaters of S Gloucs and N Somerset? Did they look at the distances travelled to measure commute-miles, rather than just journeys? Did they ask firstbus and wessex bus lines for data, along with ANPR logs and phone company travel datasets? These are the things we need to know.

Anyway, in the list of people the paper called for an opinion, they reached for their Fax Machine contact list and got in touch with Hugh Bladon, Bristol's member of Association of British Drivers, who is always woken up from his sleep for a quote. Hugh Bladon actually lives in Weston Super Mare, a town which is still looking forward to 1974, so it's always surprising that they can contact Hugh for a quote. That's 20 miles away, a distance quoted by Google maps as 38 minutes drive from Stokes Croft on a Sunday evening. If Mr Bladon really does commute into Bristol every day, he'll be spending an hour each way, first on the A370, A38 or M5+ portway, then in stop-go mode through town to finally reach his destination. And for what? To live in Weston? That's the place where Banksy hosted his Dismaland Exhibition —and that's not a coincidence. Probably the main problem they had there was people walking round town laughing at stuff and taking selfies in front of the sea front, not realising they weren't actually at the exhibition yet. Why would anyone voluntary live there? If you have children, think of what it does to their minds? And, think what it does to your life, with 2+h a day sitting in a car.

Essentially, you can't trust the judgment of anyone who lives in WsM of their own volition. So the fact he is called on to be the ABD spokesman is a bit worrying for them: can't they find anyone else?

And what did he have to say? Rather than go for the survey methodology —always the first line of attack—, he accepted the findings and then blamed the council


I suppose people are getting fed up with travelling into the city. here is not enough provision for people to park, and I suppose more people are using the park and rides. I would also think George Ferguson and his 20mph scheme are frightening people who think they might get a ticket for doing maybe 23, or 24mph Those are the sort of things that drive away people.With the expanding economy, I would have thought more people would be in cars. It might also be there is not enough parking. Cycle lanes now take up a lot of tarmac where road parking used to be.

This is hilarious. We have never heard of anyone too scared to drive into the city in case they get a ticket(*).

As for the "Cycle lanes now take up a lot of tarmac where road parking used to be.". He must have a different cycle map than everyone else. The purpose of cycle lanes is to provide short stay parking. Even bus lanes are only closed to parking for 3 hours a day, 21 h a week.

But he does have a bit of a point: there isn't enough parking. Only what you want to park has changed.

Look at this video of a Bristol (not a WsM) resident cycling to the shops on a weekend.
There is nowhere to park a bicycle

Our reporter cycles down hill, avoids getting hit by the 4x4 turning from Aberdeen Road without looking, and the hatchback pulling out from the other side of the road without looking, carries on a bit, having to wait with a car in front for a driver taking their time to reverse park, then pulls over themselves to find somewhere to park. First rack: 12 bikes; no room for more. Visible across the road: two racks, four bikes, no space. They continue down to Whiteladies Road. On the far side of the road, there's space for about 30 bikes, looking fairly full. On this side of the road, 6 more racks, space for 12. Except, again, full.

One of the bikes there half of an abandoned frame, lying on its side. So the the tax dodger gets to do something nobody who drives in from WsM can get away with; they stick their own bike on top of it, lock up, and go to the shops. So we see approximately six cars worth of space allocated -all from the pavement, we note- for bicycles, which is a fraction of the space allocated to car parking. What we see in this video is, on Cotham Hill alone, 32 cars, two spaces free. For bikes, 48 spaces: all taken, albeit some with dissolving relics.

Is this an unusual event? Not really; the same situation was encountered on Gloucester road an hour earlier: one space outside Maplins, someone else queueing for it before the tax dodger had even unlocked. Because on that side of the road, there are about eight bike stands, from Zetland Road up. In contrast, if you wanted to drive there, there's more space.

Essentially, we are seeing a shift to cycling as a transport option in some parts of the city —and we aren't seeing the city adapting to that.  Hugh can complain about removal of parking, but there is significantly more space allocated to parking here than any other other form of transport.

This little stretch of Whiteladies Road is interesting, as it is what the ABD use in the videos calling the council "bonkers", showing how shops have suffered from a lack of parking and have had to shut down.

Well, our anecdata beats theirs, at least in terms of being up to date, and what it says is "Bristol does have a parking problem, but it's not just for cars".

(*) If you have —or know someone who has— stopped driving around out of fear of getting ticketed at 23 mph, please get in touch.
Posted by Bristol Traffic at 17:52 4 comments:

If you look at any of the London cyclists videos, they normally involve shouting, swearing and recrimination. Well, a lot of Bristol coverage is like that —but it can be done less confrontationally.


After a point and a dismissal of he phone in use, the tax dodger points to their camera and then the number plate, the driver then responds with their own pointing action.

This is of course the site of our experiment where we see 1 car in 6 looking at their phone screen on a weekday morning. Here, on a saturday afternoon, Whiteladies Road is less congested, so it's surprising to see someone having time to check up on facebook. They don't check for very long, perhaps they don't have any friends.
Posted by Bristol Traffic at 16:30 No comments:

Hints of a left hook

Nothing spells "left hook" like a van coming up alongside with its indicators on. However, this one did actually wait for the cyclist to get past.

For London viewers: note the stressful conditions of Bristol streets. This is actually Sustrans NC4, as marked by some fading paint.

For ABD members from Weston Super Mare and 1973: note the parking spaces stolen by the RPZ, the cyclists in one direction, and how a van was held from turning by another bicycle —costing the company and city money.
Posted by Bristol Traffic at 23:50 1 comment: 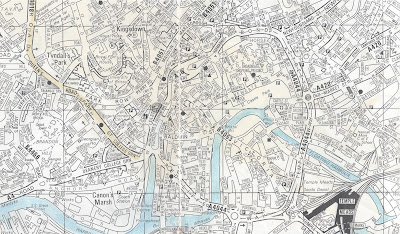 You can see, then, the multipronged battles which we've been fighting —and losing— in the war on motorists. Those bits of red paint on the main roads aren't the real war, they are just the victory signs, the equivalent of unionist and nationalist kerb painting. No, the battles fought have been far more strategic
This is what we are up against. And while it's easy to point to the current mayor and say "20 mph zones! RPZ zones!" and accuse him of conducting a war on motorists, those aren't the real war. Those are details in a conflict going back decades.
Posted by Bristol Traffic at 12:08 2 comments: