The M32 shutdown: a preview of the Zombie Apocalypse

Most films and TV series about some zombie or apocalypse or similar generally have some common visual motifs
It's the latter that interests us. After the fall of civilisation, you will never be stuck behind a bus or or a Renault Clio veering from lane-to-lane as their satnav gives last minute directions. There's obvious question: why did everyone die in a way which left a fast route through the ruined city? For that to happen, everyone in the last 30s of their life would have to get off the M32, pull to the side of Stapleton Road, then die. In doing so, they leave a nice through route for drivers, albeit for those few survivors trying to push a shopping trolley down the pavement.

But an empty M32? It's almost worth starting a zombie plague just for that experience they promised us: centre of town to M4 in under seven minutes.

Last weekend the M32 was shut down to put in a bridge —that is, local government funding for P+R commuters from the wealthy suburbs of S Gloucs, for students at UWE (more diverse than Bristol Uni), and the affluent staff of the North Fringe —the latter with a bias towards men in the engineering/tech career path.

A whole section of the city —less affluent, more diverse and more interesting than Clifton— breathed a sigh of relief and a lungful of air that didn't taste of second hand turbo diesel. A weekend off. Something they haven't known for decades.

For us, we got to experience something similar: being the only car on the M32.

Driving down the M32 late Sunday evening, there are signs warning of the M32 closed at the Stapleton/Muller Road junction, or, to the affluent of the city, "the IKEA roundabout", that being the sole reason they'd ever get off here. 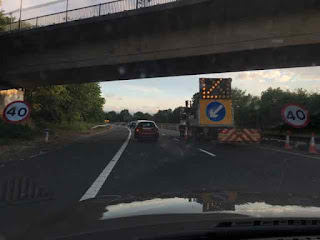 As we prepare come off, bringing up the phone to tell us how to get to Clifton without having to make eye contact with anyone, we see the flyover "40 mph limit due to faulty barriers" section. Some of the cars come off before it, a few stay on. 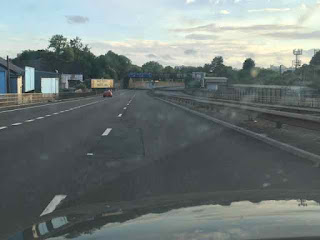 The first sign of an unusual situation is that the outbound lanes are empty: there is not a single vehicle leaving the city.

The sole car in front pulls off at St Pauls, leaving an empty road ahead. 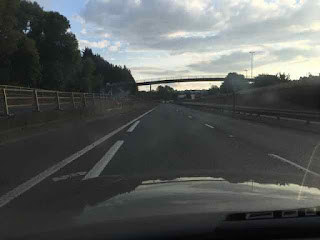 This is then: the first time that we have ever seen the M32 without traffic. Those vehicles opposite? Parked. When the Zombie Apocalypse comes, people will be required to pull over to the hard shoulder and put their hazard lights on —either as their last step of being human, or their first step as a zombie, before running up the exit and trying to eat anyone sitting in Mina Road park.

For all those people who missed it: going down an empty M32 is not so much a discovery of what those builders of "the M32 parkway" imagined the experience to be, it's actually very unnerving.

All motorways in the country are full of traffic, weekends as well as weekdays. That traffic actually provides cues. If the brake lights come on in the distance, something is up, time to start coasting down. If everything is going along at different speeds in each lane; all is probably well. And if all lanes drop to about the same speed, it's busy. Pick the lane with the best stopping distance in front and be calm.

Most importantly, the other vehicles provide speed information. Because if there is one place where you do need to keep checking your speed on the dial, it's not the 20 mph zone. It's the motorways. Once you are going at 75, the vehicle noise going up to 85 is generally the same, and from there, 85-90, 90-95, easy to pick up if you get into the fast lane to pass things, then, while speeded up, start going along with the other vehicles in there. Motorways are where you do need to keep an eye on your speed. Which is what the other cars help do.

Ignoring rain/fog/snow, when you should be making decisions based on stopping distance alone, you can generally benchmark your speed relative to other vehicles. If there are trucks going past you: either you own an original British Leyland Mini 850cc —or you should speed up. In the middle lane, going along with the Astras, the Golfs and the Zafiras: you are in the 70-80 zone, where generally most people sit. If you are in the outside lane going past those vehicles, maybe you should think about pulling in once you get past them. And if you are in the outside lane and there isn't an Audi Q7 driving so close to the back that you can see the nasal hair of the driver, you are going at less than 90 mph.

In the absence of those vehicles, you have no idea what speed you are going. Instead you are too busy looking round, going "ooh, there isn't anyone in front; where is the car right behind me, the one in the slow lane about to swing past the HGV? And why isn't there someone sitting in my driver-side blind spot?". It's fundamentally unnatural —like nothing you have ever trained for. We ended up spinning up the motor to 40 mph and trying to cherish this odd event for as long as we can.

Like Halley's Comet: We shall never see it again in our lifetime.
Posted by Bristol Traffic at 10:46 1 comment: 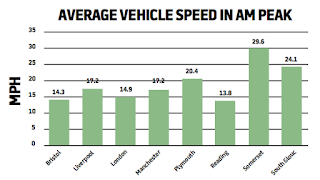 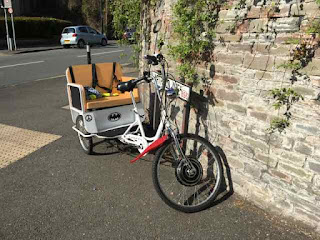 We say to FirstBus —who also own FGW railway line—: don't make your war on cyclists a class one. Because that will call into question a lot of the infrastructure you are having built for you by local and national governments.
Posted by Bristol Traffic at 20:15 No comments:

Being as the Bristol Traffic HQ is an open air drinking establishment in Stokes Croft (the wall on Turbo Island), we are used to the sight of nudity.

Even so, our encounter with the Bristol Naked Bike Ride was such that we had to delete our videos for the sake of humanity.

If you find yourself getting excited about the sight of a naked man on a Brompton, well, based on the participants of the local naked bike ride, you've got a bit of an obsession with folding bicycles that you should either get looked at, or at least get in touch with Brompton for a printed catalog. 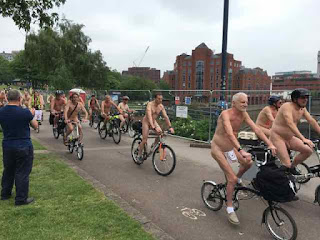 Can we also observe that this image exposes the lie that "cycling is good for your health". Do these people look healthy? We think not. And as for the claim that Brooks saddles are comfy? There's nothing to say there except look at the expression on some of these people's faces.

For next year's ride, we propose having a review board deciding in advance who gets to ride. We will volunteer our services —provided nobody sends their nude selfies with them wearing nothing but hi-viz and a helmet. You know who you are.
Posted by Bristol Traffic at 21:35 No comments: