This is the A4174 Ring Road heading from Emerson's Green to the M32. It is a weekday evening, so even the high-occupancy traffic lane is full of single occupant vehicles not moving.

Campaigners for the removal of the 2+ lane during the morning rush hour dream of this exact same situation on their morning drive in. 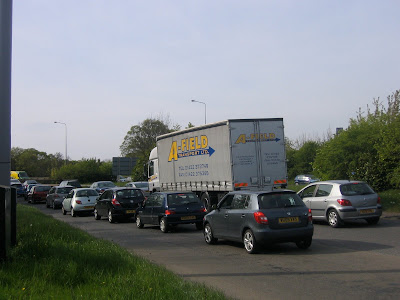 This jam is pretty predicable; morning and evening: traffic jam here. There is no cause other than traffic volumes on the ring road, caused by M32 congestion, caused by an inability of vehicles to get off the M32 at Muller Road, St Pauls and the city centre, which is caused by buses and bicycles taking up space, and the excessive number of pedestrian crossings, according to our strategic partners the Association of British Drivers.
The ABD have recently flagged up a new concern, that the EU is building a new in-car spy network -CVIS . For those of us building city-wide vehicle spy networks, this is news, as EU funding would be very handy. This led us to the CVIS home page, and a recent workshop on intelligent roads. At this point we feel we must disappoint our ABD fellow-travellers with the bad news that this is not an attempt by central government to track everyone's movement. That can already be done by monitoring mobile phone movements across cell quadrants; no need to force upgrade-every car, as it covers old vehicles and pedestrians. No, this is actually an attempt by the car manufacturers to render the entire current fleet of vehicles technically obsolete.

A key problem with today's vehicles is that they last too long -hence the German and UK old car scrappage scheme -people just aren't buying new cars at a rate that sustains the EU car industry any more, and there is a limit to what can be done on the mechanical engineering side of car design and the appearance of cars to make them obsolete faster. By adopting a high-tech interior, from MP3 and SatNav to DVD players to children, you can introduce an obsolescence rate driven by the lifetime of technologies, not engine longevity. The CVSI scheme takes that idea and raises it, by having the in-car computing communicate with peers (warn vehicles nearby of ABS-hard braking, ice conditions, crashes), and with roadside infrastructure.
The best summary of the work is New Transport Paradigms of the 21st century. Ignoring the fact that new Transport Paradigms of the late 21st century are likely to be a horse and cart and a sailing ship, it's an interesting read. On P28, for example, a key feature of the system will be that it will tell you that you can drive down a bus lane. In Bristol, we do not need to wait the rollout of an EU-wide car-to-car communication infrastructure to do that.

From a datacentre-state, the CVIS infrastructure isn't that interesting. We can already track vehicle movements, so the only issue here is that the city is trying to provide data back to the cars, such as where there is a parking space, then reverse parking for you. But how do you prevent non-CVIS vehicle owners from ignoring your rights and stealing that space first?

The other amusing entry is from the French Autoroute Operators, which on page 17discusses their objectives: profit


This is pretty profound. It implies that the road operators view the road safety data -traffic information- that they collect as their property, and only something that should be shared with the cars if the drivers are prepared to pay for it.

This is not a police state, no, its just another source of revenue for the road operators and the car manufacturers.
Posted by Bristol Traffic at 11:39