Secret Plans of the WoEP

Here is a bit of Fig 2 on Page 4 of the Executive Summary of the BRT proposal for Ashton Gate, the one that is causing the Prince Street Bridge controversy -the one where it turns out the WoEP have been secretly planning to take one pavement and one lane of the bridge and ban bikes from the bikes+pedestrians area created last October. 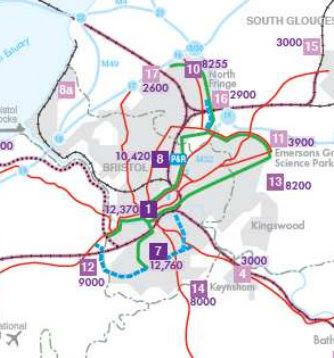 Look at the route from the centre to Emerson's Green. That is the railway path. Have the same team that has been secretly planning to take over from a bridge, been planning to run buses down the BRT? Isn't that what they promised to stop doing last year? Well, I don't think we can trust them.

For anyone not involved in that struggle, remember that the WoEP had been secretly planning this for at least a year, made a commitment to focus on the railway path route not because it made economic sense, but because it would be less disruptive to cars. It wouldn't just remove a park from east bristol and destroy the best footpath and bike route in the inner city, it wouldn't solve the congestion problems in/out the M32, and be surprisingly useless. Yet this diagram, seemingly prepared in Jan 2009, shows it is still a dream of the WoEP.

And so it begins -again. Have they not learned their lesson? Do they not know fear? Do they not realise that the protest group hadn't even begun its direct action campaign? In particular, the "let's try and get a bike on a FirstBus bus" event was going to be hilarious, a proposal to show that the claim that BRT+bikes could be combined wouldn't work by having everyone try and get their bike onto buses all round Bristol. Then cycle to the next stop ahead of the bike and try again. Some of us were looking forward to this.
Posted by Bristol Traffic at 00:29

Going to be fun for all those people who buy cycle houses at the old chocolate factory!

Is that a bus-road heading southwards along the Malago Greenway too?

Yes, and the Save the Malago campaign are the people to talk to about that.

There's a comment posted by Jon Rogers passing on an officer's email about the position with BRT on the Malago Greenway on my blog.

To save people traipsing over to Chris's blog at http://greenbristolblog.blogspot.com here is what the officer said, "I also understand that you and others are also concerned about the potential route options for Rapid Transit into South Bristol, particularly Hengrove. Work on this future phase of the Rapid Transit network is underway but route options are still being formulated and prioritised. Public consultation will take place; I think you are aware that we have already met with representatives from the Windmill Hill area to explore options for the alignment in that area."I am trying to be careful not to name individual officers. Some remain to be convinced that more openness is really the way forward, so this seems a little gentler on them!

Happy to seek answers to other questions.

@Jon - but how many of the Council's officers still think that the purpose of "consultation" is spin and media management after decisions have already been finalised? Or, at best, a collection of unbelievably skewed multiple-choice questions that pretty much mandate the desired response (see the Ashton route "consultation" for a fine example of this).

I really do hope you can make a difference (if only because that might actually delay my tearing up my membership card and sending it to Cowley Street), but I can't say I'm optimistic.

PeteJ, Jon can but try. The alternative is to resign oneself to the inevitable corruption of public life. I think we have to work for something better, however hopeless that sometimes seems.