This lorry (WX05NHL?) is blocking the Bath buildings/Stokes Croft junction, where there are some hatched lines telling you not to do that 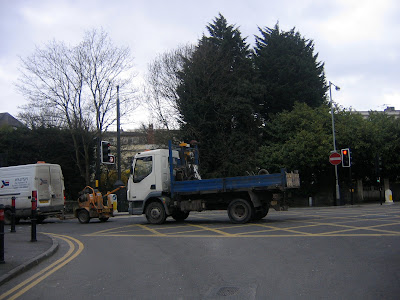 There is also a red light saying "do not go", but this lorry decided to also ignore that when it pulled out.
Some people might thing: selfish, reckless, dangerous, light-running , etc, etc. But the reality is everyone else at every junction does exactly the same thing. The only way you will get across the junction is to pull out and block it. It waited until the light went red as it was trying not to block the junction, but then, after the light changed, the driver realised that it was the only way to make progress. Not much, but progress. At a rate of 50 metres every three minutes, it will be at the St James Barton roundabout within an hour.
Posted by Bristol Traffic at 07:38