A bit more detail on the works.

Here is where they've cut away into the bank -that stone may be part of the original wall of the Station. Because there was a station -now only the streetnames remember it -Station Road, Station Lane. And here in the ground, the stone. 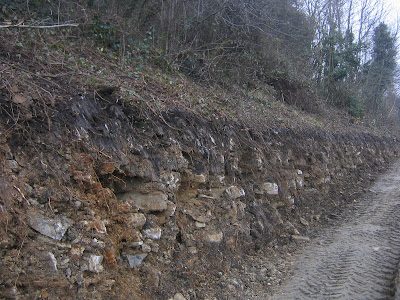 The council now owns the land at the corner of the path/road where the station lay -it gives them the option to introduce a new station if things ever came to it (though platforms and trains that stop would have to come first). 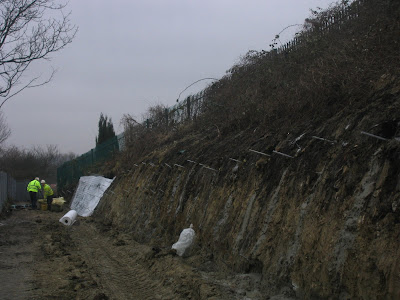 Further down, they've drilled into the earth with their thunderbird kit, and stuck these giant rawlplugs in to it. 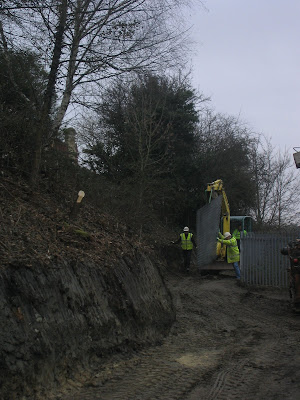 Coming down the hill is a digger carrying a new bit of mesh. This stuff is going to go against the earth and be bolted on. This will leave the earth alone, remove the risk of landslips and such like. 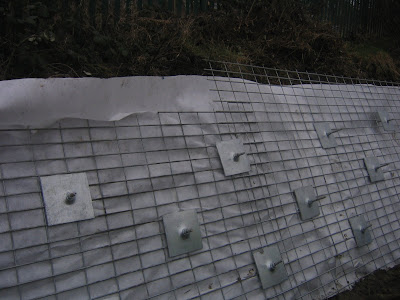 That station park could be used as a bus station, and by running buses down here, we'd integrate St W's with the rest of the city. Otherwise a bit of a lost village. No buses to into the St Werburgh's "past the tunnel". If a BRT route came off Muller Road at the far end of this new bike route, it could go into St W. and then head over to the M32/Newfoundland way bike lane, or, once the bus route was extended to Ashley Hill, bring BRT to Montpelier. With the bus station at the Muller Road end of the route, it would integrate with the existing infrastructure and provide a new bus route to the city that would not take away any valued car capacity.

The team planning the new route, and the councillors all seem to believe that we are the only people to have dared to have this thought, and that this is nothing to fear. And we believe them. Yet how can we be sure that the engineers in the West of England Partnership don't have a CAD design being prepared for BRT-down-path, ready to submit for government funding -just as they are now doing for the Cycle-city funded "improved" Prince Street Bridge?
Posted by Bristol Traffic at 12:50

The sad thing is that I feel the need to just ask the question!

I must admit that the earthworks are quite impressive and no doubt cost effective compared to more traditional methods. I wonder what the engineering limitations are on that approach of pinning the cutting walls.

@Chris - I don't know, but it seems a fairly "green" approach compared to big concrete walls. They will also have solar powered LED lighting. I propose a big party at the Farm pub when it opens -where we buy the builders a round of beers.

@Jon - this post has been sitting as a draft since early march, not quite finished. I was intending to raise the whole BRT-on-path theory in jest. As of yesterday, I am no longer sure.

"a bit of a lost village"

And that is exactly the context for st werburgh's beauty and individual charm, to my eye, and many others i've no doubt. change this and she would be just another faceless through suburb.

save lovely st werburgha from the ravening woe monster!!!