Bishopston. Site of the infamous Gloucester Road bicycle enforcement program. It is also near to Elton Road, where the need for residents to park forces them to double park in front of the entrance to the Elton Road bike lane, as these cars X393DMR and V885EYA have done. 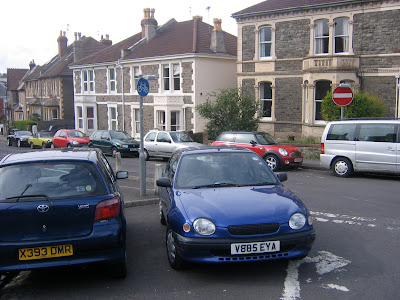 Some people -and we know who they are- have expressed concern that it is somewhat hypocritical for the police to enforce pavement cycling at one end of a road when it is not possible to use the road option due to the car lane in the way. These people are also of the suspicion that it is the probably the same people who park this way that attend the local PACT meetings and push the anti-cycling agenda, one which -correctly, in our opinion- tries to prevent bicycles from using either the road or the pavement.
Indeed, the spring newsletter from the Bristol Cycling Campaign, contains an article on the PACT meetings which does say these things, highlighting the difference between the Kingsdown PACT area -police stopping cars driving the wrong way down Nugent hill- with the Bishopston PACT area -say no to bicycles-. The article finishes with a call to action to attend the PACT meetings, and after infiltrating the meetings, steering the police away from the Evening Post's approved agenda to one that tries to support cycling city through police enforcement of anti-car rules.
Is the attempt by those subversives working? Well, If you look at the latest Bishopsworth PACT priorities, you can see that they are trying to have their way -but failing.
They also note that the cycle enforcement has been successful:

Response from the public has been positive with coverage in the Evening Post.

It looks like the bicycle subversives tried to infiltrate the PACT meeting. Fortunately, enough residents managed to attend to achieve some kind of balanced enforcement on Gloucester Road, and no mention of the bike routes that carry bicycles to and from the A38, which can stay as resident parking. No doubt the next edition of the Bristol Cycling Campaign newsletter will contain more subversive propaganda, more calls to action urging in the Bishopston area -which is clearly becoming a flash point in the clash between car+walk and bicycling citizens.

But look at this video. This family negotiating the parked cars on their Saturday morning Gloucester Road chocolate croissant run do not have any difficulties.

They just swing out in the oncoming traffic lane before curving in to the bicycle contraflow area. If the mother at front felt that these cars were somehow endangering her children, she would be driving them round to the Saturday out-of-school engagements, rather than trying to cycle around the city. The presence of families negotiating this route by bike shows that there is no hazard, and that the focus of Bishopston enforcement should be bicycles on pavements on Gloucester Road.

Bishopston says no to bicycles!
Posted by Bristol Traffic at 12:22

There may as well be a marked parking space there... I don't think I have ever been there when there weren't 2 cars parked obstructing the cycle lane.

Interesting that the Cycling City team have chosen Bishopston for their first target area in trying to persuade people to reduce car use n favour of cycling.

The reason they have chosen Bishopston is that MOSAIC (the geo-demographic marketing tool) predicts that people in this area are likely to consider cycling as a viable option, and that they respond well to direct mail.