Our last posting on Bristol Cycling Chic raised some excellent comments, including a personal denunciation from the Copenhagen team "you have a fetish for hi-viz clothing" and one from a local, mudpup, who says

There's loads of stylish people on nice bikes in Bristol. Maybe not as easy to snap them as in Copenhagen but they're out there. Search Bristol Cycle Chic on Flickr for a few. There is a growing cycle culture here and it's good to show the world, but if people are going to emulate sites like Copenhagen Cycle Chic and Amsterdamize then at least stick some decent photos on them!

Well, if we have to compete with the others, here goes. Here is a blonde-haired woman cycling down Cheltenham Road, normal clothes, normal sunglasses, road bike, no helmet. 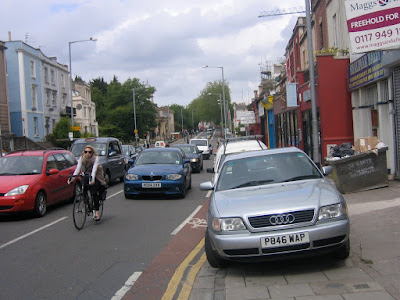 Notice how she is cycling with the traffic, correctly positioned in the lane, ready to get over the next junction the "A&M Motors road-range junction" as we now call it. 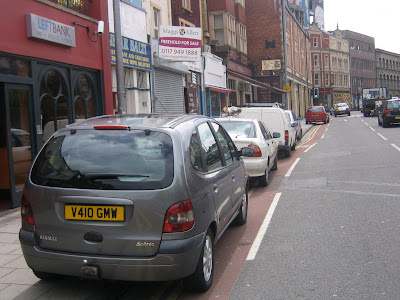 Some people in the last posts comments blamed the council for not fully embracing cycling, but we think that is changing. We also see that a whole line of vehicles have recognised that this junction is not one where you want to be cycling in the far left lane. Selflessly risking their bodywork and wing mirrors, vehicles like the Renault V410GMW and Audi P846WAP have carefully placed their cars so as to entirely block out this bike lane. What's more, cars are parked here every day, sometimes the same ones, sometimes different ones-but all striving to keep this a cycling city. 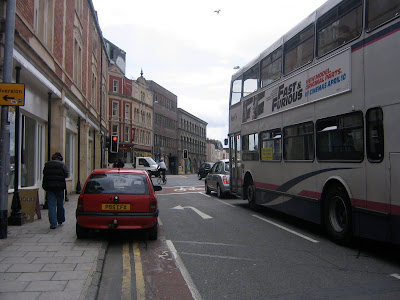 All like the Corsa P95CFX are carefully positioned to ensure that cyclists occupy the whole of the innermost lane, and so get to line themselves up correctly at the lights. Leaving only the risk of A&M Motor van drivers to deal with.
Posted by Bristol Traffic at 08:52