Keeping track of what is happening in city transport, there is a new city cycling blog, Bristolized. It's goal is to be a local version of the copehagenize and amsterdamize sites -to evangelise that city's transport solutions to the rest of the world.

Some flaws exist with this idea

1. According to the Urban Dictionary, to bristolize is already a slang verb in the US, to mean "to get as destroyed as race cars at the Bristol Speedway" -that is Bristol #2, somewhere in the US.

2. Bristol's transport policy exists of a motorway to the centre of town, splitting the city, drivers parking where is most convenient for them, and a public transport system that everyone except FirstBus management hates.

In this context then, we are pleased to see Amsterdam being Bristolized, here with a taxi waiting across a bike lane and a side road. Because taxis come first, you know. 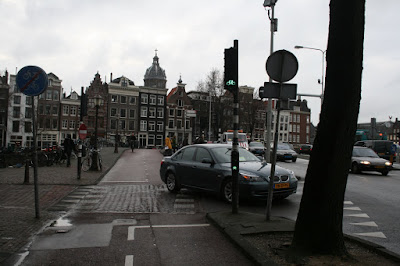 3. The other thing to consider is that Bristol Palin is now making appearances in the US as an advocate of abstinence as the sole form of contraception to for youth to consider. In this context, to bristolize means to have sex with someone under 18 without adequate anti-baby preparations, and so is to be whispered amongst sixth-formers "did you bristolize er?". "Not yet".

We wish the new Bristolize blog well then, and hope to see all forms of the verb in use in it, and may even contribute some photographs. We ourselves shall use meaning number two: to export selfish driving and parking and FirstBus as a substitute for a functional public transport infrastructure. But we think Brizzlize would be the correct spelling, and lack so many meanings.
Posted by Bristol Traffic at 07:21

Bristolize is not to evangelise transport solutions persay but just to provide a place to focus positive images of bike usage in Bristol.

its partly a response to the negativity that seems to be prevalent in Bristols 'cycle' culture.
Bikes are practical transport, lets celebrate that. bikes are positive, social and healthy.

Why are you so negative?

Bristoloze is not so much a blog , it has no ambicion but to expose what is already there but hidden, honest, practical, sexy bike usage in Bristol.

1. You are mistaking us for some pro-cycling site. We are in fact part of the pro-car lobby.

2. We look forward to your site providing some sexy bike usage photographs, it not having been updated since may. We await the opportunity to denounce your photographs of people cycling round the city looking happy