Despite the fact that the Rownham Mead Residents Association has fought hard for a barrier across the harbour bike path, here to stop cyclists getting past. Unfortunately, they still do -they do not take the hint. One barrier and a cyclists dismount sign is not enough to counter all that state-funded propaganda, those Bristol-cycling maps, that show this as a safe way to avoid the Hotwells roundabout and therefore get into town alive. Sterner Measures are called for.
Here are the new measures. Starting at the Hotwells Bridge and the Pump House Pub, there are some new grooves running over the path, just the right size and position to catch bicycles and drop them. 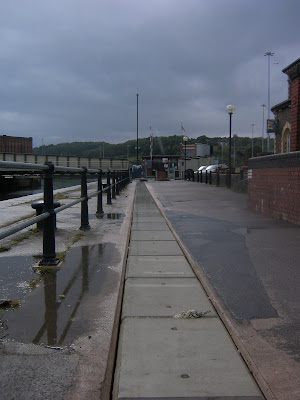 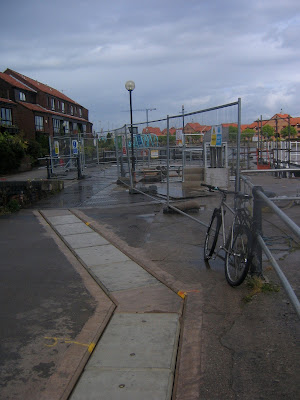 ,
If there is one complaint we in Bristol Traffic could make about this, there seems little effort underway to measure the effectiveness of the design. If the residents really want to stop cyclists, they need some defensible data collection to go along with the experiments. Either sensors to measure the number of cyclists falling off, or just some bluetooth loggers to detect a reduction in the volume of cyclists. Yet they have not approached us to get recommendations for hardware or software for such an experiment -which implies to us that they are not being scientific.
Posted by Bristol Traffic at 21:44

Colleague of mine fell off here yesterday (experienced cyclist). They used to have a tarmac filler in the groove but this has been dislodged when the covers were moved. Another hazard in the mould of the rails at the industrial museum.