Normally when this site covers school coaches, we feel sorry for them. It's not their fault, for example, that people have parked vehicles like in the coaches-only bit of Cotham Road, and so they are forced to double park to let schoolkids on and off safely. 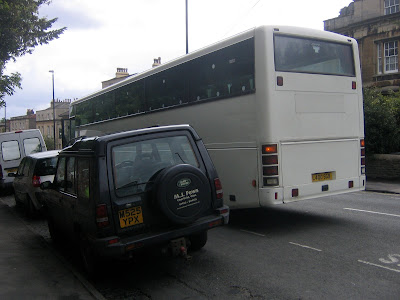 No, it is the councils fault for failing to provide designated parent parking zone outside the school across the road -more on that another day, with the "Mum Rage" video.
But today, a bit of a focus on one vehicle, particularly this Turner Bus we see some distance ahead of our parent-and-child bicycle 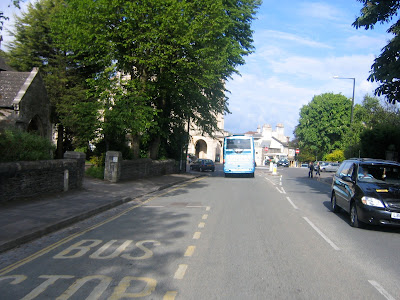 But which we soon catch up with, giving us the photo that includes the registration number and the telephone number to call to raise a bug report against their understanding of the "When it is safe to overtake" rules. 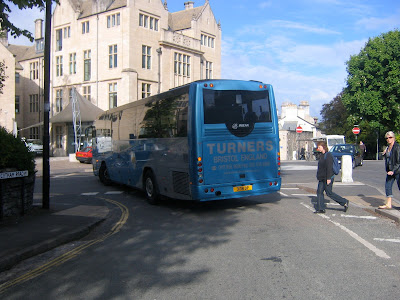 In particular, if you are a bus only doing 12 mph up a hill, and there is a bicycle doing 10mph up a hill, then you should not attempt to pass the aforementioned bicycle while there is an oncoming car. fortunately, the oncoming car and the bus both agreed to slow down, and the bus could then wait to pass the bicycle safely, but for a moment it felt that there was a bus that wished to occupy the space currently used by a bike.
This is very inconvenient to the parent, as one does not want to teach the child about swearing, and yet with actions like this, well, they get to learn.
It is time to call Turners on 955 9086 -providers of school buses to council and independent schools in the city, and ask them exactly WTF the bus 3138DP was doing at 08:22 this morning.

Updated: phoned up, reported, they will tell the driver off, the office apologised. Probably on the Colston's school run, apparently. This is a reminder why a camera is so handy on your bike, keep it on a handlebar bag. Get one that powers up fast, and which lets you take pics one handed while your son goes "daddy, what did those words you said mean?"

Update 2: forgot to put the reg# of the landrover in the posting. M525YPX. With the hi-viz gear in the back, they are probably part of the sanska "Caring constructors" team rebuilding the school here. More on them another day.
Posted by Bristol Traffic at 10:28

what the law regarding taking pictures/using a mobile phone whilst riding a bike?

It wasn't a mobile phone, but a handheld camera -and there is not (yet) any laws against it. Though once the video of me doing the farm pub path holding the camera in one hand comes out, there probably will be.

Please can I add an advertising feature from the other end of the country? Quaylink Busses in Newcastle & Gateshead (operated by Stagecoach) could also do with some free publicity. I'm waiting for them to complete their investigations into similar multi-vehicle-in-same-roadspace driving . . .

Karl, you can -maybe they go on the same overtaking bikes course.