Eastfield Road: view from the hill

Eastfield road isn't much fun by bike; there's a steep hill by Westbury that is the most hazardous: narrow pavement, downhill cars and bikes at speed, uphill cars trying to accelerate out of the Westbury congestion. This would seem the obvious place for a crash.
When we heard about the tragedy in Westbury, we assumed that is where it was. But it isn't, it's further back, towards the Southmead/Henleaze mini roundabout. This isn't a fun stretch to ride down, as cars are often impatient, it's hazardous (bends and side roads), yet sufficiently wide that can't easily control the cars behind you by occupying the lane. Even if you are in the middle of the lane they will go past you, upset, causing problems for you on the downhill when you need to get past them.

Here's the view from the pavement looking towards Henleaze and Horfield -where the car came from. Despite stories in the press saying the car "lost control", it looks from this angle that the car driver failed to turn the car into the bend, but instead skidded in a straight line onto the pavement and the adults and children on it. 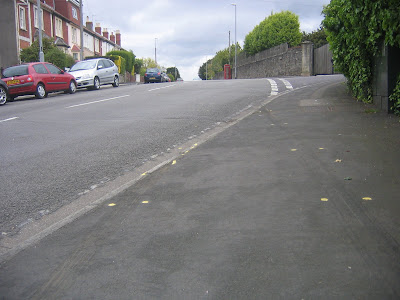 Google streetview gives you shows what it is like to approach from from the Horfield/Henleaze mini roundabout.

There's a a traffic light protected pedestrian crossing (sign of problems in the past?) and then a straight stretch with a bit of a rise.

If you follow the road along, you come over the hill, and reach a bend. That is where the crash happened.

While not a police "traffic forensics" expert, they have marked the road up with the same awful painted annotations that Cabot Circus now has -a history of someone's death, painted on the road and pavement. Those markings seem to indicate that the car didn't try turning either before or after it was skidding -it just went straight onto the pavement, going fast enough that the brakes couldn't stop them in time.

If the driver hadn't put the brakes on and skidded, if they had instead followed the turn of the road, then Sam Riddalls's parents, friends and family wouldn't be mourning his loss. So what happened, where did things go wrong?

We aren't skilled to judge, but it certainly appears that speed was be a significant factor in the incident. The skid marks are long, and you wouldn't end up having to hit the brakes and go up on the pavement unless you were going so fast down that road that the bend came up unexpectedly, you couldn't steer the car round it, and using the brakes was the only option that sprung to mind.

As we said at the beginning this doesn't look like a car "lost control", as the local paper is describing it, any more than it would have picked up excessive speed by "accident". This is a car whose driver chose to drive too fast for a city, way too fast, and as a consequence, killed a child.
Posted by Bristol Traffic at 07:11

Thanks for your work on this BT, sensitively done under difficult circumstances.

It's important that we don't allow the Evening Post to represent it as some sort of freak accident that came out of the blue. There's enough evidence already to say quite clearly that this killing was the predictable consequence of the driver's decision to ignore the speed limit.

The driving licence is not meant to be a licence to kill. We need to get across that a driving licence requires the holder to obey traffic rules and to drive with care for other people's safety. Failure to do so should mean the loss of the licence even when there appear to be no adverse consequences.

It's the passive voice that is always used in RTA reporting. Tom Vanderbilt is sick of it.

No, it wasn't the car that killed the boy, it was the driver.

"She fled the accident on foot .."

"Accident"? Did she "accidentally" drive recklessly? No, she chose to put the lives of others at risk.

A terrible thing to happen.

These heavy lumps of metal propelled at speed are no different from guns or any other weapons, and ought be treated accordingly.

Driving a car is not a right, but a privilege; a privilege which should be immediately and permanently forfeit by the irresponsible.