The dark pavements of Westbury on Trym

For the second time in a week, we find ourselves visiting a roadside memorial to a pedestrian killed by a car. Last time, Troy Atkinson, age 15, killed at Cabot Circus. Now, Sam Riddall, 11, killed on the pavements of Westbury on Trym. 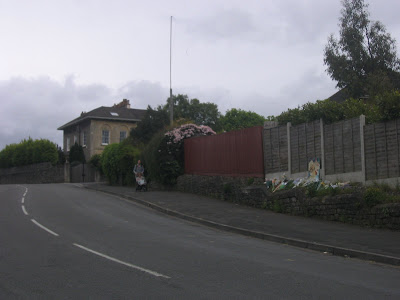 Everyone should go and see both their memorials, to spend a moment watching the traffic carrying on, while on the ground, yellow paint show the police marking up what they saw on the ground, as they try and determine what happened.

Here, the car slid down the pavement, after having clipped the wall. If cars were parked on the road, as it sounds like some were, then there would have been nowhere for anyone to run to, no way to escape, in the little time they had. 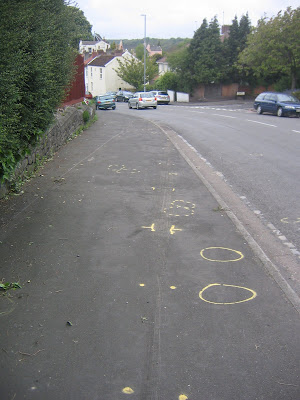 Further up the hill, you can see where the car mounted the pavement. You also get a hint of the energy involved in the collision -hitting a kerb like this could have destroyed the wheels, yet the car kept going. 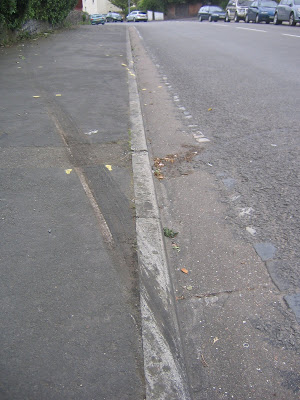 Everyone knows that you can estimate vehicle speed from skid mark length; a full document on the topic gives the specifics. To really know, you need to conduct experiments with a similar car, and know the condition of the brakes. What is clear is that the car did skid a long way.

At the top of the hill, the police are asking for help: 0845 456 7000 is the number. Someone out there killed a schoolboy on Friday, and is now hiding. 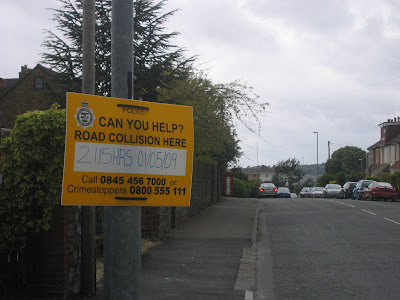 No photos of the flowers and their messages -go and see them yourselves. And the ones in Cabot Circus. Last week was an awful week for the city -the loss of its children must not be forgotten.
Posted by Bristol Traffic at 21:00

Most "accidents" are not accidents at all. They are events contrived by the rules of the road. The rationale for this statement can be found at FiT Roads, and/or Free to Choose Free to Move. The system by which we live and die is fatally flawed. Simple solutions are at hand.