Following on our campaign against zebra crossings, we find ourselves forced to start new campaign "Save Double Parking!". The anti-car council has come out against double parking as being dangerous and anti social. Maybe but for residents is the only way to park a car after the morning school run, and for commuters, its the only way to park a car with all the legal spaces taken up by those selfish residents who don't drive to school or work, so freeing up spaces.

Every cyclist who owns a car and goes round being smug, "I pay my road tax", is missing the point. The car they've paid the road tax for is on the road somewhere, that's the rectangle of tarmac they have rented, and by not using it they are inconveniencing not just the vehicles they hold up on their crawl round town, but those commuters who rely on the spaces they create.

Returning to the double parking problem, the BBC have an article calling it anti-social, an article that includes this road as an example: 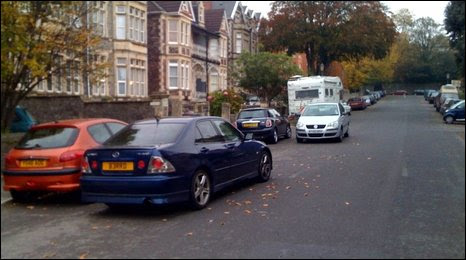 We don't normally cover double parking, and when we do we never name the roads. Those streets where you can get away with it are secrets we do not dare share, as then we will have nowhere to park. Certainly this road looked familiar.

The buildings look Cliftony, possibly university area, the road is wide and quiet with an RV on the left, opposite a smartcar. Time to send a query off to our petabyte scale datacentre to see what shows up -and yes, we know this road. It's Belgrave Road, BS8.

View Larger Map
What's interesting about this road is why was it chosen? Did the council have to tip off the journalists that this road was trouble? Was in in fact staged purely to push out new CPZ/RPZ restrictions, our very own WMD-for-iraq claim?

We have a theory there. Belgrave road is right next to the BBC. The journalists just popped out for 30 seconds to get a couple of pics and then went back in, job done. Of course, that does not mean that the photo was not staged. More research is needed.

This is where our new experiment to instrument cyclists and pedestrians in the city has begun to pay off. By having them filming themselves, we can review exactly what they've done wrong, from their own position. This is a lot easier than filming them ourselves, as it is really hard to hold a camcorder steady while driving through Montpelier, especially when you are trying to text someone. We just let the bikes do the work, then later get the pics. Up until now most bike filming has been written by the cyclists, always whining about something or other, such as this Glaswegian Magnatom, who has taken up the classic sport of that city -starting fights with strangers- out of the bars, and onto the roads. We aren't like that. We will criticise the cyclists and any other tax-dodging subversives we see.

Here then, is our ride-by of this road, where we can say that yes, it looks like a good place to double park. Nobody seems to mind, and it's handy for the BBC. This is important if you are Noel Edmonds, on a visit to the competition to see if your latest idea for a Saturday evening show has got any interest. The video was taken ten days ago, in term time, so if the council staged the entire double parking scene, they kept it up outside the BBC for a long time -it probably is genuine.

Analysing this video, we see a number of events which concern us
Event #3 concerns us, the car which has to put their foot down to swing past the bicycle, then cut in , apparently to double park right in front of them. If the cyclist had not been pootling up this double-parking-friendly road at 5 mph, the driver would not have been forced to take such action. It is not environmentally friendly having to accelerate and brake like this, showing that while bicycles themselves may not be polluting, they cause the other vehicles in the city to waste more fuel, to pollute the city more.

We can see then, in 46 seconds, how a couple of bicycles can hold up the journey time of cars, be they important cars who need to use the Bus Lane, or merely someone who needs to double park outside the BBC offices. It is bad enough that these cyclists are allowed to do this, that they do not pay any tax, let alone compensate us for our lost time -now we see that the council is trying to take away our right to double park. Furthermore, the video showed how pedestrians, cyclists and even skateboarders are trying to take our roads away from us. We must resist!

When will this anti-car oppression end!
Posted by Bristol Traffic at 07:14

"that's the rectangle of tarmac they have rented"

Rented? I. like most others, get my valuable 4 square metres of on-street parking space given to me absolutely free by our ever so car-friendly council.

This subsidy alone is probably worth around £1,000 per year and when you consider how many tens of thousands of motorists are benefiting from this council largesse it adds up to some very serious money indeed. If we actually had to pay for the real value of the road space we use the council probably wouldn't need to collect any council tax!

So please don't knock the council as anti-car. You should know that's just a front to placate the agitators. When you analyse the real extent of public subsidy you will see that the council are very firmly pro-car.

Well, that road tax allows you to keep your car on the road for a year, so it does allow you 4m2 of tarmac. This square of tarmac could be anywhere outside the inner boroughs of London without paying extra to move or park it. Now, if you have a Group A low-CO2 car you don't pay road tax, C-Zone or, in BRS, RPZ fees.

I'd like to heap some more indignation on what that Zafira did at 0:31. I'm a dirty tax dodging road user, and nearly every time I go out on my bike someone in a car does this to me. It can be very dangerous; I've sometimes had to brake hard and swerve to avoid them.

Why can't they just wait for you to cycle on? It would cost them half a second. Or, perhaps it costs them something extra in pride to ever treat cyclists without scornful contempt.

If you were in a car, or on a motorbike, they wouldn't dream of doing this to you. When you're on a bicycle, many drivers think they have a right, nay a prerogative, nay a DUTY, to overtake you, no matter how dangerous, or pointless it may be.

Unfortunately I cannot suggest a feasible solution. Swearing madly when it happens, and being heard only by bemused pedestrians, doesn't seem to work.

I was peddling down Whiteladies Road the other day, on the piece of road the Merc was trying to get into. A short distance after this there is a an actual 'cycle lane' (painted line in the road). A car pulled into it, but kept moving, right in front of the girl on her bike in front of me, forcing her to brake and serve.

I was wrong. She caught up with the car (as you do) and gave it such a kick with her (steel toe cap?) boots that I nearly fell off my bike out of respect. She then cycled on, leaving the car in its self-made confiture.

@Marc, two possibilities, both related to "game theory"; expect more coverage of this in the week.

1. The drivers are only looking one move ahead; the "horizon effect" kicks in. It is only after overtaking the bike that they realise that they have to do something like stop.

2. It is done as revenge for holding up the car. To overtake sensibly -or even wait and perform the planned manoeuvre behind the bike- would reinforce to the bicycle that cycling is a safe form of transport round the city, and we do not want to do that.