Bristol Graffiti has been quiet recently, so we have to help out on Muller Road, which has multiple vote conservative posters up on it's Shaldon Road advert area. It's clearly not targeted at the locals, who are happy to not only rip off bits of the advert, but write up things on top about giving the saved money to bankers. And they walk there to do it! 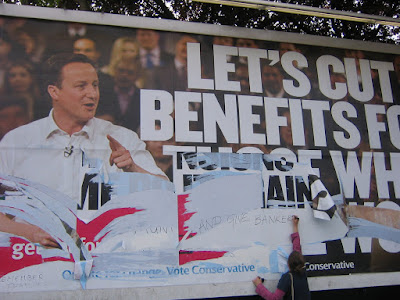 This advert is targeted -like the ones at the bearpit- and the motorist stuck on the way to the M32, held up by an anti-car council that refuses to make Muller Road a dual carriageway, refuses to remove the pedestrian crossings further up the road which create all these tailbacks. This party knows their audience: the British Motorist, though it doesn't quite get the message right. Rather than "Let's cut benefit for those who won't work", it should be "let's raise taxes for those who don't drive". That would be better. The Chinese government -communists- subsidise petrol, yet here in the UK we won't even sell it at cost. It's enough to make you vote for the Communist Party of the People's Republic of China, though even in the Bristol West postcodes that got Bristol East ballot papers, these people aren't listed as an option.
But that is not the real issue of today's post. Today's is about a shocking political gaffe by a senior city politician. We aren't going to spell out what he says -you need to listen to what he says. And what he doesn't. He is coming out and showing us which side he and his party is on when it comes down to the greatest issue in the city this week.

This exclusive video shows exactly what enemies we, the out-of-Bristol motor commuter face on our daily drive in, with the M32 traffic jams and the struggle to find a parking space afterwards. We are the victims of these inner-city bigots!
Posted by Bristol Traffic at 07:13