A Community RPZ? In Montpelier? As if.

In Montpelier today, Jon "ex-cllr" rogers is having some meetings proposing some community RPZ as opposed to an official one.

What does that mean ? Self enforced? Warning notes? Or something relying on guilt like the blinking 20 mph lights near schools?

It's not going to work -and if you want proof, take a trip round Montpelier 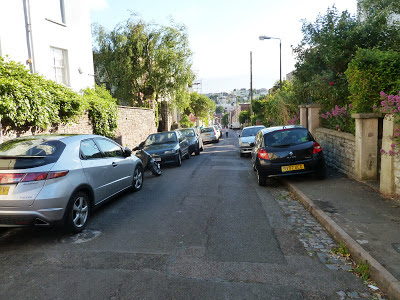 This is Richmond Road, one of the tightest streets in the area to drive along. Everybody walks in the pavement, because the pavement is the only way to fit two lanes worth of cars in.

Here we can see whether or not community-note-in-windscreen RPZs wil work.

Take this car, S589JDG. Purple note in its windscreen. 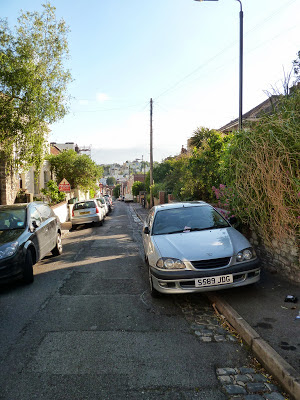 Anone thinking this note is complaining about a car on the pavement isn't from Montpelier. 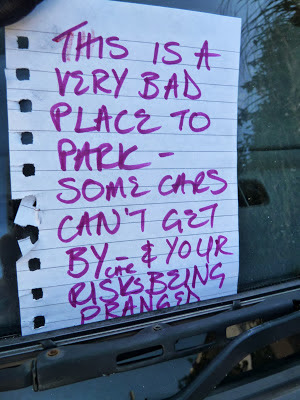 While one of our reporters was taking the photo, a van had to get by, something that took about 5 minutes of some of the most careful driving you can do in a van, windows down, driver looking out, the Bristol Traffic consultant assisting. 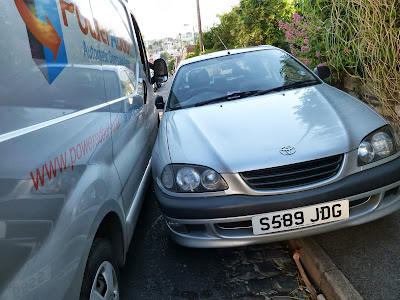 It only worked because van mirrors are a different height to car ones -they managed to clear each other with 3-5 cm of gap, going through at crawling speed. The driver of this van deserves a lot of credit for how carefully they did this -though it did take about five minutes

If there had been contact, this wouldn't have been a wingmirror taxation -this would have been a bodywork tax. Which would have raised some interesting issues on responsibility. 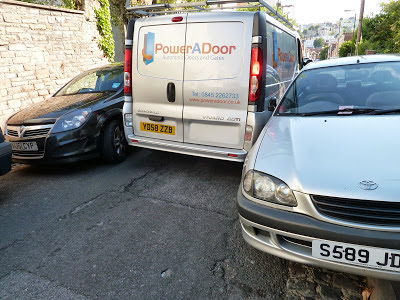 If that had happened, the owner of S589JDG would have not seen any photographs from Bristol Traffic on the event -they'd have been destroyed.

Someone will no doubt comment and say "this is a one off", but our dataset says not: car parking in Montpelier makes it impossible to get any vehicle bigger than a van through without severe damage happening. We've also seen near fights developing in St Andrews Road -the wider road parallel to this one- over who reverses so as to let the oncoming traffic past a road narrowed by both-side parking.

We've stated before that it is business traffic where the cost of being held up can have a real cost attached to the time wasted. Commuting, school runs, shopping trips -fixable by setting off earlier. They aren't working hours and the cost is purely subjective.

Working in the city? Different. Delays increase journey times, reduce the number of journeys you can do a day, and place a limit on revenue.

This is why the Kingsdown RPZ has made driving through it easier. There's no need for anyone to write warning notes in purple ink to anyone inconsiderate enough to park so far out on the pavement that they block passing cars, there will be someone full time putting yellow stickers on the cars that hold up vehicles. These are a lot harder to ignore than purple notes, they stand out "pour encourager les autres".

Anyone who thinks a "community RPZ" is going to work is living in a world of unrealistic idealism -and missing the point that an RPZ would not only help residents get about their lives, it would help the business of the city work.

A roll out of RPZs around the inner city would make it a better city for business driving. No commuter-caused congestion; delivery options -and less roads blocked by overparking.

Richmond road is going to be the front line for a Montpelier RPZ -as it is clear that you can't paint parking bays on both sides of the road -and even if the council opens up the paveparking to make it official, there's still not enough room to get vehicles through.

The only viable outcome would be for one side to become no parking. Which would be controversial -and explain why some people are claiming that purple notepaper put in windscreens would work. A community with some wheel clamps and a tow truck might have more effect.

Posted by Bristol Traffic at 18:27

The anonymous reporter on the normally spoofing blog "Bristol Traffic" names me at the top of his or her article, suggests I organised the Montpelier Park meeting and that 'Anyone who thinks a "community RPZ" is going to work is living in a world of unrealistic idealism'.

May I make a few points?

(1) The meeting was not organised by me, but by Simon Lewis and others to coincide with a request by the Bristol Post to take photos of local residents to illustrate their article on the Mayor's proposed RPZ plans in Montpelier.

(2) I attended in my role as a 'community champion' - having been a local councillor for 8 years, I care passionately that the views of all local residents are heard, and believe that my experience can help ensure that the Mayor gets to hear all those views.

(3) I have personally set up a number of Facebook discussion groups to explore these issues, share ideas and gather information and data. The first was http://bit.ly/FBResPark Ashley ward Residents' Parking Discussion Group and the second was http://bit.ly/BRSlocalstreets to explore community led options, which may include formal TRO enforced but flexible schemes but also other "nudge theory" alternatives that might be cheaper and sufficient in areas further away from the city centre or away from major transport routes.

(4) other councils are successfully exploring ideas like the Considerate Parking Initiative where 'Police Officers, Police Community Support Officers and the District Councils Streets and Seafronts Officers issue notices to vehicles parked in a manner that whilst not necessarily illegal, or in contravention of existing Traffic Regulation Orders are potentially causing a nuisance to others.

'The initiative has proved so successful that it has now been extended across the whole of the Tendring district.' http://bit.ly/1a434S8

(5) Finally places like Totnes and London have shorter hour schemes in residential areas, and also schemes where they just have car permits and signs at the start of the permit only area. All ideas discussed on the Facebook sites, and welcomed as innovative solutions by the Mayor.

Please can we keep an open mind on what works where, and let us continue to push for sufficient flexibility in the Cabinet report next Thursday? Thank you