The Downs Committee joins the Bikelash!

Attached to Clifton are "the downs". You can recognise it by the way that all paths on the park have a big "No Cycling" sign -usually near some parked cars 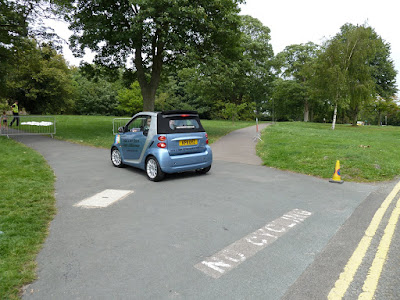 The nominal reason they have the no cycling sign is to stop pedestrians and parked cars being damaged by cyclists. 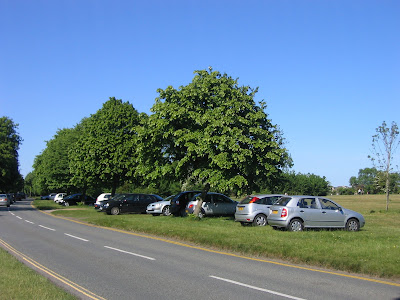 In high summer, the Downs committee allows the Zoo (in exchange for money, obviously), to let visitors park on the downs, and bill the visitors for doing so.

In 2010 proposals to provide a park and ride alternative, were, rightfully, rejected. 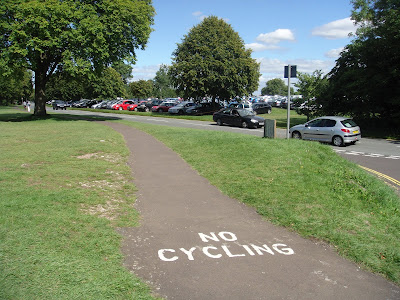 It's quite clear what the Downs Committee wants. Nobody cycling on the pavement, people driving to the downs and parking on the grass.

Even so, council plans threaten it -and this week it is with a shocking proposal to make the speed limit in the park 20 mph!

Fortunately, the committee has come out and rejected it.

PLANS to bring in a 20mph speed limit on roads around The Downs have been opposed by the committee responsible for the open space.

The Downs Committee – made up of councillors and representatives from the Merchant Venturers – considered the proposals at their meeting yesterdayand voted against them by four votes to two, with one abstention.

Councillor Peter Abraham said: "I feel very strongly about this and I think we should oppose the 20mph limit being brought in on roads around the Downs."

Merchant Venturer Andrew Densham said he had attempted driving along the stretch at 20mph before the meeting and was greeted by flashing lights from fellow motorists.

"It is almost impossible to do," he said. "Going 20mph is absurd on most of those roads.

"I think the consequences of it would be more dangerous."

Fellow Merchant Venturer Anthony Brown said: "The traffic sub-committee asked what the experience had been on Ladies Mile and was told the average speed was 26mph and there are no major problems.

"If the speed limit is reduced people would do 20,16,18 and people would want to overtake. It was our view that it could be more dangerous."


there we have it then. Total opposition to the proposals based on a single experiment of driving round at 20 mph, once, and noticing cars got upset.

We can expect the cycling campaigners to be a bit put out by this
The tax-dodgers should not be surprised by this.

Cllr Peter Abraham is the councillor for Stoke Bishop, whose residents have to drive over the downs to get anywhere. It's bad enough that the RPZ is going to remove a lot of parking opportunities, now they will be forced to drive a little bit slower.


I would much rather see the 30mph limit, which was only recently introduced, rigidly enforced. A 20 mph limit might be appropriate for some streets, but I think it will cause road rage incidents and a lot of frustration for motorists on The Downs."

See: the council has already forced the speed limit down from 60 mph to 30 only ten years ago, and it is hard enough for his electorate to handle

Lowering the speed limit in one of Bristol's main parks from 30 mph to 20 mph would only increase road rage, and, by encouraging people to walk and cycle round the park, increase problems!

This is why we support the actions of the Downs Committee. We also appreciate that many of the committee members are from the Society of Merchant Venturers. It is precisely because these people are chosen without democratic oversight that they are able to resist petty popularist policies like making parks safer for pedestrians and cyclists! Only they can represent the true voice of the evening post commenters!

You got there first!

I was going to post about this in the context of the Committee also overturning officer recommendations regarding an Ancient Ash on the Downs.

The tree has been the subject of a number of surveys, and has been identified as potentially dangerous (although it can't do 30mph). It order to preserve it's ecological value we (Bristol Street Trees) persuaded BCC to suggest fencing it off rather than remove it, just in case it sheds a branch at some point in the next 100 years. This was the recommendation to the committee.

However, based on their concern for the good people of Bristol, who cannot be trusted to not jump over fences, the committee rejected to the officers' recommendations and voted to fell the tree, as it apparently poses a 'Health & Safety Risk'.

Anyway, the good news is that you still can't cycle on the Downs, or anywhere near the tree...

The Merchant Venturers (sorry - the Downs Committee) must be pretty weedy if someone flashing at them for driving at 20 mph is enough to put them off the whole idea of 20 mph limits on the roads on the Downs. It will be pretty funny when the Downs becomes a little 30 mph racetrack when all the roads around it are 20 mph... You'd expect Bristol's own Bavarian Illuminati (Associate members) to be a hardier bunch :-)