We have mixed opinions of the Bristol Evening Post, and mourn the fact that whenever it tries to be more forward thinking -as in its coverage of gay marriage- the remaining readers find it offensive.

The Western Daily Press -the Somerset paper that seemingly never gets sold in the city- isn't trying to be so forward thinking, not with its Chris Rundle article "Cyclists are a nuisance on Somerset's roads and byways" 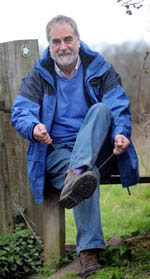 The author here clearly has some hate issues, or he is trying to be witty in the style of Matthew "string them up" Parris  by advocating violence against residents and visitors to the area.


And the Western Daily Press encourages this? Actually prints articles advocating violence against cyclists? As that is what they are doing.

Matthew Paris eventually apologised -after hundreds of Press Complaints Council complaints. We wait to see what the Western Daily and Chris Rundle do.

Before anyone says "we are coming out as a cycling organisation"  Not so. We give cyclists exactly the same respect we give anyone else in this city: nothing whatsoever. But nor do we go out of our way to run them over, shout abuse or try to hit them. Violence tends not to make the original problem go away -it just escalates things.
Posted by Bristol Traffic at 23:42