where are the speedo-watching crashes?


Here are the two petitions to look at

One claim in the Speeders' petition is


"roads will only be made more dangerous with frustrated drivers and people watching the speedo rather than where they're going!"

We haven't noticed that ourselves, as we have a special speed limiter in our car called "the gear stick". Put it into "speed band 3", or "3rd gear" as it is sometimes known and it burbles along quite happily at 20-24mph, except in the special case that someone drives so close that you can see the driver's nostril hair and you slowly lift your foot of the accelerator to drop to precisely 19 mph just to see the expression on the driver's face in your rear view mirror.

Anyway, it may be that the speed petitioners don't have manual transmissions, or are somehow unable to determine road speed, and do have to look at the speedo all the time.

This is something we can test now that the central 20 mph zone is over a year old. All we have to do is look at the data.

One irony here is that if they do occur, the fact that they will take place at 20 mph means the police aren't likely to get involved. Any crash involving pedestrian, cyclist or stationary object will be less likely than at 30 mph to injure anyone, so they may not get called out. Indeed, even the insurance companies may not get a look in if people care about their no claims discount. head-on collisions will still have 40-50 mph of energy, so are more likely to show up. This means official data sources: —police and insurance— may show a reduction in RTCs even if there has been an increase in RTC events.

We ask the speeders, then: where are the speedo-watching crashes?

We've had the zone for 18 months now, with millions of journeys in it by now. If speedo-watching crashes are a risk in 20 mph zones, we should have seen some.

We put it to the speeders then: show us the data.

Now, assuming, on the off-chance that there is the data, that speedo-watching does cause crashes, hence 20 mph zones are more hazardous than 30 mph zones, why do the petitioners still propose lower limits by schools? 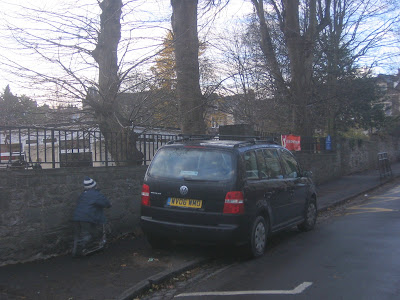 So if that claim "20 mph is more dangerous" isn't utter bollocks, then, if the speed campaigners really believed it, they should be pushing for 30 mph zones round schools "for the children".

Speeders: show us the data —you've had 18 months to collect it.

*(Null): maybe, but the petition explicitly called out "Speedo watching crashes" as an increased hazard of the 20 mph. We want the evidence which should have accrued over 18 months, an explanation of why the evidence isn't there, or a retraction of the claim.

The petitioners are free to claim they don't like them, that they view them as a fundamental affront to their perceived right to speed between traffic lights, etc, etc. But not to make claims about increased risk unless prepared to defend them.

20 is too slow, and dispite the pro propaganda it's 33% slower and adds 33% more time to a journey (ignoring effects from traffic lights etc). I ride a motor bike (6 gears) and have to crawl in 2nd which kills my fuel consumption. The car (diesel) also needs to crawl in 2nd and uses more fuel.

Even if the petition talks about increased crashes that haven't happened, the point is that a large majority (something like 8 to 1) don't want this scheme. Also even if some don't live in Bristol, they still travel here and/or work here.

You can also tell what people think - on most roads I would say almost everyone ignores the new limits (and I've followed police, buses and and many BCC vehicles).

Found some actual fact based studies...

The AA study is even worse and shows a 5% increase in fuel consumption and pollution.

Expect some commentary on this. First though. "those mpg numbers manufacturers make up"

It's all over the news today - the NO2 figures for diesels has been faked. So this make the decision to force all petriol vehicle to observe a speed that INCREASES NO2 emissions by 8% even more short sighted (this is a measured increase by the study and not a claimed one by the makers). Given the state of diesel, petrol will probably be the dominent fuel and so in a single stroke of stupidity, all the gains made by better engine technology in petrol vehicles over the last decade has been wiped out. To press the point, the number of people who will die from air pollution will increase more than those who are saved by slower vehicles.

Those articles you point to highlight speed bumps, as they cause the most acceleration and deceleration. Bristol's 20 mph zone has this.

-With a lower limit, you can feel free to actually accelerate less aggressively, and coast down too.

-The Team's Prius runs very efficiently at 20, and that coast-down leads to regenerative breaking.

-A goal of the 20 mph zone is to get more people walking and cycling, not driving their kids to school in turbo-diesel cars. That said, no cyclist enjoys behind a diesel in stop/go traffic, with white vans and buses being some of the worst. That Baldwin street bus-bypass is designed to eliminate the bus problem, but it only covers one area.
And, as the most polluted road in BRS is the bus, taxi and bike only Rupert St, diesel pollution is an issue.


The future of urban cars is probably hybrid, maybe electric, though the economics and logistics are still dodgy there (expect some post on Tesla vs Google soon —TL;DR you'd have to be driving a lot for a Tesla to make sense; if you buy one you almost want to drive more to reduce that cost/mile)

>"the number of people who will die from air pollution will increase more than those who are saved by slower vehicles."

This is potentially true. But the response to NO2 problem should not be 'let's have 30 mph limits in town', because that will not address:

1. the fact that with the average speed of cars in bristol being ~16-18 mph at peak hours, even on the M32, the 20 mph limit is irrelevant at the time most cars are driven in the city.
2.the fact that as fuel economy on motorways peaks at < 60 mph, if we want to address NO2 pollution from motorways, the peak limit should drop from 70 to 60.

If you are an advocate of speed limits driven by pollution profiles, then you're going to have to be and advocate of 60 mph limits on motorways. Otherwise: sorry, you aren't being consistent.

There is sound science for 20 mph limits.
Aside from the survivability of pedestrians hit by cars (Ashton & Mackay 1979).

Abstract
Almost all locomotor animals respond to visual looming or to discrete changes in optical size. The need to detect and process looming remains critically important for humans in everyday life. Road traffic statistics confirm that children up to 15 years old are overrepresented in pedestrian casualties. We demonstrate that, for a given pedestrian crossing time, vehicles traveling faster loom less than slower vehicles, which creates a dangerous illusion in which faster vehicles may be perceived as not approaching. Our results from perceptual tests of looming thresholds show strong developmental trends in sensitivity, such that children may not be able to detect vehicles approaching at speeds in excess of 20 mph. This creates a risk of injudicious road crossing in urban settings when traffic speeds are higher than 20 mph. The risk is exacerbated because vehicles moving faster than this speed are more likely to result in pedestrian fatalities. Keywords vision, detection, looming, children, road, safety, time to contact, tau, perception, development Received 9/17/10; Revision accepted 11/5/10
http://pss.sagepub.com/content/22/4/429.full.pdf+html

Effectively, comments of those who don't want 20mph limits boil-down to this:
My convenience as a driver, is far more important to me and completely outweighs the safety and health of children, residents, pedestrians and cyclists who live, travel and work down the streets I want to drive along and pollute with my nasty, dirty diesel or petrol powered death machine.
So fuck you all.