Following on from a previous post examining the important role nature can play in a childs upbringing and the opportunities for first hand experience provided by the cars parked on Bright Street we are pleased to bring you an update with the current state of progress regarding the car vs hedge vs pushchair situation. It appears someone has come up with a perfect solution... and removed the hedge. 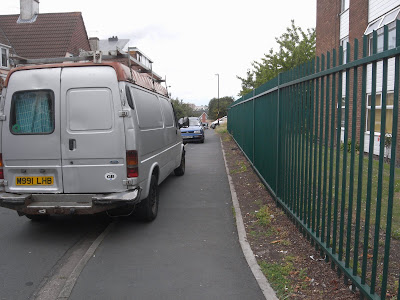 Meaning that silver van M991LHB and blue Golf P601LKP have plenty of room to park on the pavement and still allow enough room for pedestrians and for wheelchair access as requested in the leaflets that the Police have been leaving on car windscreens in the area. 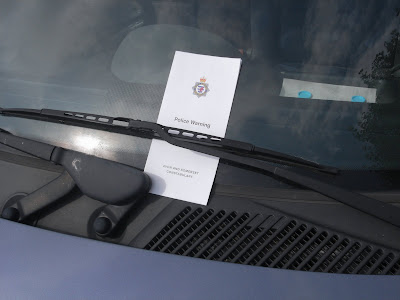 The covers of the leaflets placed on windscreens in the Redfield / Barton Hill are a bit cryptic not giving much of a clue to the advice they contain, unlike the ones placed on vehicles in St Werburghs which have the advice clear to see. 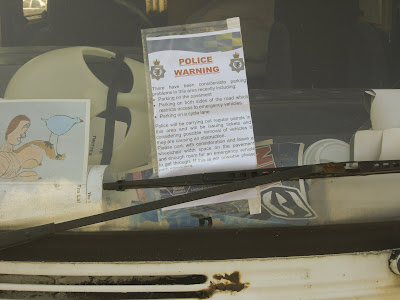 " There have been considerable parking problems in this area recently including:
* Parking on the pavement.
* Parking on both sides of the road which restricts access to emergency vehicles.
* Parking on a cycle lane.

Police will be carrying out regular patrols in this area and will be issuing tickets and considering removal of vehicles if they are causing an obstruction. Please park with consideration and leave a wheelchair width space on the pavement and enough room for an emergency vehicle to get through. If this is not possible please park elsewhere. "

So in conclusion, pavement parking is Police approved as long as you leave enough space for a wheelchair. And if there's not enough width on the pavement it's a good idea to remove whatever is causing the obstruction on the other side of the pavement before considering removing the car.

In the case of Y499NLC seen here on Picton Street... 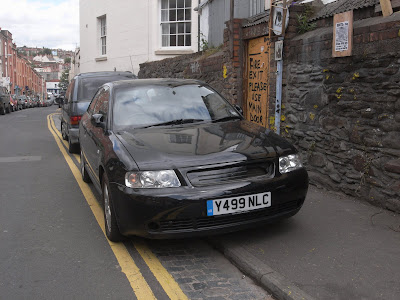 a simple removal of the wall along with the fire exit that is currently cramping the space on the pavement would be a perfect solution. Not only would it open up the width of remaining pavement to allow a wheelchair through, it would also allow anyone who became trapped in a fire inside the adjacent building to escape without having to risk the horrendous possibility of scratching the car when attempting to use the fire exit.
Posted by alice at 22:44