The Bristol Traffic mail room has been flooded recently with an unprecendented amount of letters, postcards and telegrams from readers in response to a recent post, with most correspondance expressing how underwhelmed readers were with the synchronised van display. 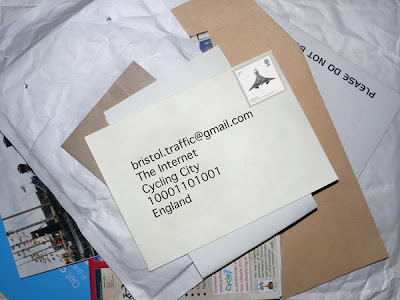 One reader writes in to say that not only did she find it unimpressive, but she also feels she can do better! "What's so special about parking up the pavement? I do it every day! So does everyone! I don't see why those vans should get to have their photos on your website. How do I get a photo of my skills on your website? I've enclosed a couple in case you can show them. I think they're rather special and as you can see from the windscreen so do the authorities in charge of the awards. Not only have I got all the way up the pavement but I've done it in an area that will gain maximum attention from pushchair users. Hope you can show off my talents too, Shirley Parker RK06 TZG"

Well Shirley, although your skills are obviously impressive enough for an award, we have to say that your display is still not on a par with the vans. One area you are lacking in is stamina. While you managed to hold your position until just before teatime, the vans held strong for almost a whole week without flinching once. We do feel that your attempts deserve recognition though for good effort. 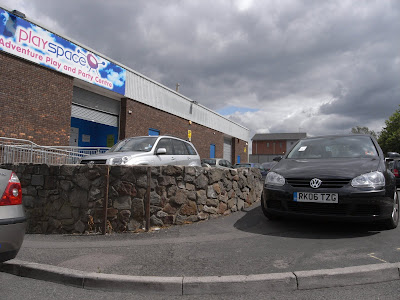 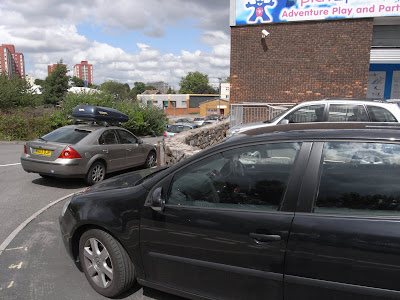 We noticed too that you have used the often favoured pavement outside Playspace on Barrow Road in St Philips. We know that if your display was being judged by our panel then points would definitely be deducted for lack of originality. Although it has to be said, displays of pavement parking are become a rarer occurence here after partons of Playspace expressed a dislike of the parking methods, details of which were passed on to the management, who have obviously launched quite an effective awareness campaign to stop people parking in such a manner, as can be seen in the photo below. 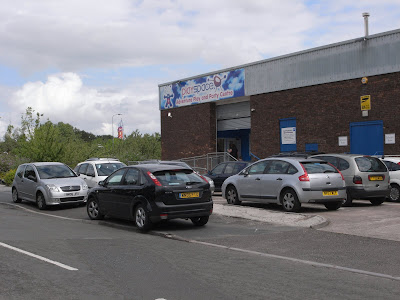 A radical difference I'm sure you'll agree. Although driver WN56FTO didn't agree pointing out that unloading her child into a pushchair to get from the car to the building she was greatly inconvenienced by the extremely inconsiderate parking of driver WM06JFX which stopped her being able to get her pushchair and child along the pavement and they had to go around on the road to get past.

We'd like to offer a solution and show an example of the parking configuration the following day. 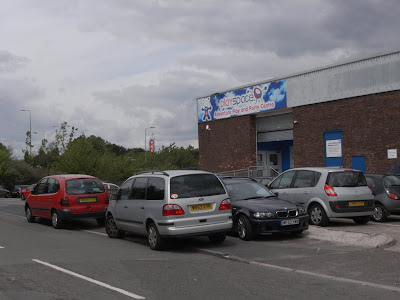 Although it looks remarkably similar the configuration of cars in the above photo is actually subtly different from the previous day. Whereas the cars were previousley arranged with one at the front and two at the back, they are now the opposite way around. Having WR53 ZVN and WF53YWN arranged next to each other at the back means that R869 DTG at the front has clear access to the entrance without having to risk the road and everyone is happy. Subtle yes, but it's amazing what a difference a small change and a bit of common sense can make.

Of course there is also the option of parking over the road on the other side, and while it will involve crossing the road it's a danger and sacrifice that some people are willing to make, because they're selfless and kind like that. Driver YG58HXX has not only parked over the road but also a few yards down the road meaning they'll have to endure some serious walking to get to their destination too. But that's ok becuase if it means putting other peoples safety and convenience first then they're all for it. 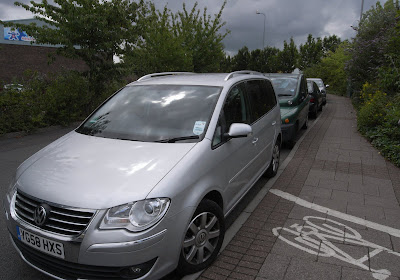 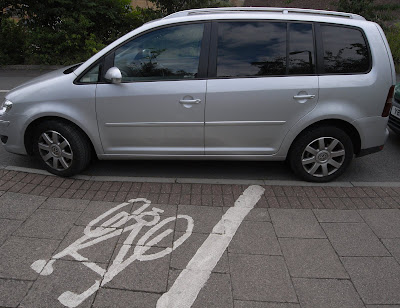 Not only are they going out of their way for others, they are also letting unobservant cyclists know that the dedicated cycle path that passes under Barrow Road helping cyclists avoid having to cross over the Barrow Road / St Philips Causeway crossroads, has well and truly come to an end at this point. 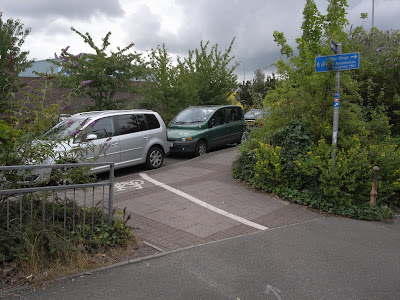 So it's not all just about winning, it's also about due consideration for those around you as exemplified by YG58HXX. After all life's not a race. It's not about reaching the finish line the quickest, but enjoying the scenery on the way.

As the famous saying goes, If you don't stop to smell the flowers once in a while, you'll probably spend less time standing on the pavement next to them and statistically be less likley to be in the way of someone who needs to park on it.
Posted by alice at 14:37

Nice. I think obstructing a bike path is a police matter, as is that bmw entirely on the pavement. Worth calling in, perhaps.