The Shortest Cycle Lane in the Universe? 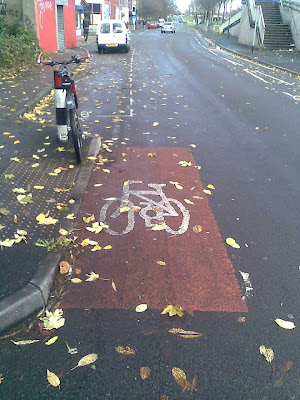 I reckon the Bristol to Bath railway path must be the longest cycle lane around here, a glorious traffic-free 14 miles to Bath (despite having a ring road built through it and recent attempts by First Group and the previous administration of Bristol City Council to turn it into a glorified bus lane). It was the first facility that Sustrans - then cyclebag - built and something that we can all be proud of. It's famous the world over, you know!. Well, here's another first that the cycling city can be proud of. Tucked away along Newfoundland Road and nestling quietly beside the M32 is possibly the shortest cycle lane anywhere. Not having my tape with me, I paced it at about 3 metres - my trusty steed added for scale. At either end is car parking, so it can be regarded as a separate lane, unlike the other side of the road which does have a cycle lane, punctuated by occasional bits of red asphalt, but is actually a lot longer.

We'd better give it some kind of protected status, just in case the powers that be want to run a bus route along it. So there you have it, the shortest cycle lane in the known universe. Unless, of course, you know better....

I am not persuaded that Bristol can beat Waltham Forest.

Freewheeler - Why don't you allow commenting on your Waltham Forest blog?

Looking at the W.F. photo, that is a cycle path -separate infrastructure, etc.,whereas here is a cycle lane. But not one with double yellow lines to prevent parking or solid white to stop cars entering. So it isn't much of one of those.