South Gloucestershire bollards: who are the subversives?

Yesterday, we showed photographs of militant cyclists taping reflective strips to camouflaged bollards by the MOD Abbeywood site. Today we see some more photographs, showing hi-viz tape going up too! 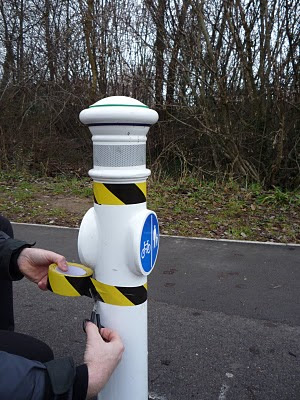 Like we said, we don't suspect anyone associated with the Bristol Cycling Campaign to have done this, as S Gloucs council has a process for dealing with those people:


No, this was done by criminals out there, acting without control, without checks and balances, without morals.

Who could it be? 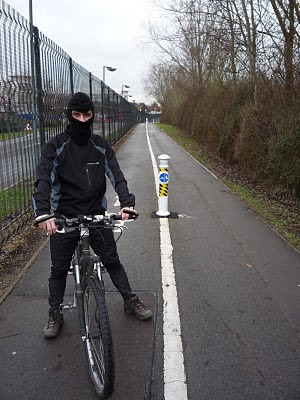 
They are not to be confused with the South Gloucester Popular Cycling Front, who was shopping at the Sainsbury's superstore nearby at the time.

We are disappointed that such clearly dangerous people could get close to an MoD site without being arrested.

Have any other subversives been taking to the street in our fair city, harassing motorists, taxi and lorry drivers on their important missions, parents trying to get their children to school by car safely, street designers trying to improve the streets for all these people? Reporting of such outrages to the Bristol Traffic site are welcome, so we can document the fall of our city into lawlessness.
Posted by Bristol Traffic at 07:32

Arrested?! They should have been shot!! The Ministry of War -that's their real title 'Defence' is a rouse to foil the enemy (who are everywhere by the way) - they have armed guards patrolling the site. Why was this subversive not shot on sight?

Exactly. If the war on motorists is over, then the war on cyclists, pedestrians and other people should begin, and for that we need more than just the war of words that is the Daily Mail and Top Gear.

Are the MoD copying the Egyptian army and just waiting on the sidelines of this, the struggle that will define our nation?

I think we should all unite behind the Popular cycling Front of Gloucestershire. It is important for cyclists to unite so we have one voice, even if many do not feel the one voice is choosing the correct path. It is better to be united than to be overly idealistic and fracture cycle campaigning efforts with silly things such as idealism and learning from best practise from places with little relevance to cycling in the UK. It's different here, why can't people see that it's hopeless to want what they have over there?