A week after someone ends up under a lorry here, a day after coverage on the local BBC news, and we have the council survey team out in force on Stokes Croft. There they are on the deck chairs behind the (shiny new) bike racks, just past the car up on the pavement by the double yellow lines. 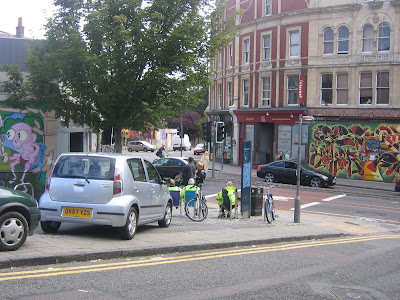 One of the big problems in any scientific measuring experiments are the effect of the observers on the behaviour of the system. In particle physics, the Heisenberg Problem surfaces -measuring something's mass slows it down; measuring something's velocity stops you weighing it. With humans, it is often the Hawthorn Effect: the act of being monitored changes people's behaviour. Either way: the observers get in the way. For this survey, the risk is that the survey cars will impinge on the flow of traffic, so altering the number, placement and velocity of the vehicles. 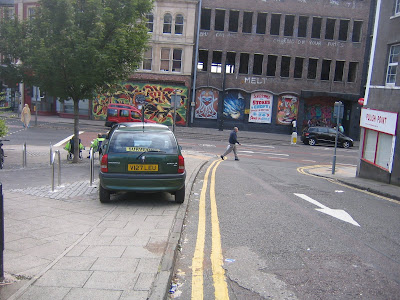 The survey team have anticipated this, and yet still managed to park their survey cars as close as they can to their deck chairs, by driving both their vehicles V127LEU and GK57YZS the wrong way down the Nine Tree Hill one-way section. They have not approached Stokes Croft at all, not even before the experiment began. 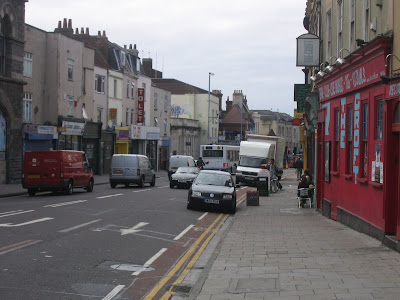 This leaves road unmodified; the bike lanes in Stokes Croft in their "raw" state, unobstructed by any more vehicles than normal.

Tax-dodging cyclists reading this blog may wish to save and print out a copy of the survey team and vehicles contraflowing the road and nipping up on the pavement. That way, when they are stopped by the police for illegally mimicing the same operation, they can declare that they are part of the Bristol Traffic survey team, and merely following the same scientific rigour when approaching the Stoke's Croft junction: to observe without interfering.
Posted by Bristol Traffic at 12:43

When will they learn that Bristol Traffic operatives are everywhere!

Yes, soon they shall know fear.

We have bigger datacentres than them too: http://www.slideshare.net/steve_l/hadoop-hep

Another odd Bristol intiative. Making cycle lanes people park in! Many of them are broken to let residents park thus negating the cycle lanes use as all good cyclists don't weave as that's asking to be hit!

Many of them dissapear just as you need them often leaving you in dangerous road positions.

No one polices the parking in cycle lanes even when there are double yellows as above!

BCC look to sensible cycling cities since you are so sure you are one! haha rubbish your a city with many cyclists but not a cycle city :) cycle lanes should be separated form traffic whenever possible, heavy penalties issues for parking and driving in cycle lanes! Come on peeps it's not hard now issit. P.S. Scrap the yellow jackets they stop motorists being naughty!