OK, I take it all back.
Contra flows are deadly.
Not because you'll be nailed in a head-on collision with a car doing 30mph, whilst cycling towards it, giving a maximum impact speed approaching 50mph, which is deadly, and probably why our traffic planners don't like the idea.
No, it's because you're likely to be broadsided by a car doing slightly less hitting you from the side, and knocking you into the on-coming traffic.
Whilst most contra-flows suggested by Bristol's cycling fraternity are ignored by Bristol City Council, even though they are completely sensible, easy to implement and obviously obvious, there are some already in place... probably to prove that they shouldn't exist.
Take the one in Elton Road. 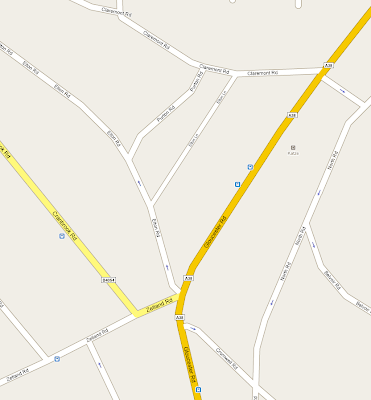 It helps cyclists access Gloucester Road from the north-west whilst preventing cars from doing the same. (Let's not dwell on the appalling quality of the public realm in such a vibrant area of Bristol which is now entirely dominated by a 'traffic intersection' of the lowest quality, where pedestrians are given the lowest priority and longest waiting times). No, really. Let's not dwell on that appalling junction. Or whoever conceived it. They have probably retired anyway. Or moved on. Or been sent to Coventry.
Anyway, back to Elton Road. Or more specifically, the interface of the Elton Road cycle contra-flow with Elton Lane. 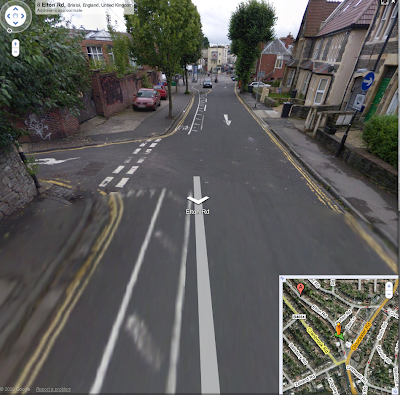 Imagine the scenario:
You're trying to get to the Prince of Wales on two wheels. Or Maplins if you're out of CD-RWs. Or the Bread Store for a City Loaf and some doughnuts. So you peddle down Elton Road, using the cycle lane contra-flow. It's rush-hour, so there are lots of cars coming towards you (fine so far). But it's rush-hour. So there will always be someone in a BMW looking for a way to jump the queue. But they are only looking one way as they approach the bottom of Elton Lane... at speed, trying to turn right. But they don't look right (they're entering a one-way street and the 'cars' are coming from their left). So they don't look right. At all. Ever. Despite the signs. Because they're going too fast. And they are in a car. Which is safe.
Well, I've got good brakes, and luckily my children were behind me.
This time.
(Aside: Moi? Judgmental of Bristol traffic engineers? And Urban Designers? Never)
Posted by Quercus at 07:00

I've taken to coming down Elton Lane rather than negotiating the blocked entrance to the cycle lane on Elton Road - but I always look right myself for other cyclists. Would a convex mirror opposite the junction help?

Lots of cyclists use this contraflow to join the Gloucester Road.