We are still seeking photos of the days when there was a mini-roundabout here, but until then we are blessed with this photograph of what the junction looked like pre-widening. Remember, at this time there was a bike lane and a pavement wide enough for a pedestrian to get past any parked cars. The improvements to the junction are to reduce pollution by helping traffic flow. Pedestrians and tax-dodging cyclists can use the back roads instead. 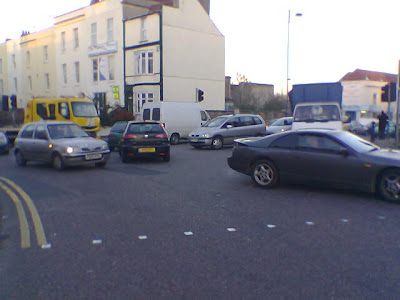 As to what is going on here, our Reporter "TJ", says

I seem to remember that someone in Muppet Group B actually hooted at the traffic trying to go from Lower Ashley Road into Ashley Road under the green lights. They did manage to all clear the junction within a minute or two (the grey sports car on the right is just starting to move forward onto Ashley Road) but for a while it looked like being a really entertaining snarl up.

This is fascinating, as it is another classic example of real-world deadlock. In computing systems, a deadlock occurs when a number of entities are each blocked, waiting for the actions of the other entities. It can only occur if
For more detail, there is a set of slides on the topic. While most people don't really care about such computing things, it is interesting to see it in the real world because of this:
This is pretty important, because the whole idea of choosing the best option for yourself regardless of the decision the others make is the whole foundation of Game Theory. And in Sussex Place, the Nash Equilibrium appears to result in the loss of traffic flow. (Yes, that is a university lecture, but its a political science one and doesn't have much maths in it)

So, why is that important? Because Game Theory was the underlying political science/mathematics of the cold war. And John Nash, the mathematician behind it. These are the equations you would use when planning a conflict escalation policy that starts off with tanks in Berlin or Vietnam, and ends with an exchange of strategic armaments in ballistic missiles over the Arctic Circle, and hence the end of humanity -the big Failed State.

The politicians, the soldiers, sat their with their maps, their tables, their graphs, got the mathematicians in and game up with plans that during the cold war came pretty close to that condition on a couple of occasions, but everyone always backed off. For which we all have to be very, very grateful.

Comparing the Cold War to Sussex Place then, we have to pretty glad that those people trying to drive across Bristol weren't involved in planning or managing the conflict, as we wouldn't have stood a chance of getting through it alive.

Posted by Bristol Traffic at 07:57