That known subversive, Chris Hutt, is celebrating 24 years of the Bristol-Bath railway path's existence. He may celebrate it, having helped build it, having snuck out with other troublemakers like John Grimshaw, and built the country's premier walking/cycling path while British Rail wasn't looking.

But think of the damage it has done for the city. A stretch of Bristol is forever deprived the option of a railway line. When our strategic partners, the West of England Partnership, tried to reclaim this wasteland for bus use, all those whining tax-dodgers got together and fought it off. Yet it was built for such public transport in the first place.

We do like to visit the R.P., primarily as it is a good way of keeping our eye on those subversives: Chris Hutt, Josh Hart, Steve Meek and others. Here, on the first Sunday in August, we have one of the original subversives, John Grimshaw, cycling from Bath to Bristol. 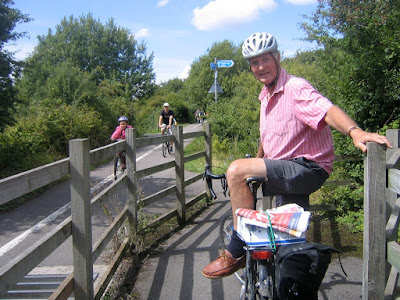 Why exactly is he cycling on the path? Is he enjoying the first sunny day for six weeks? No, it is part of a train journey from Wiltshire. Apparently he and three others were thrown off the train at Bath, because there were more than the official number of bicycles (2) on the train.

From John's perspective, he is probably thinking that it was lucky that he had the foresight to build a 15 mile walking/cycling path, just in case such an event should occur. But look at it from the train company's perspective: this man stole a line from them, the least they can do is make him use it. 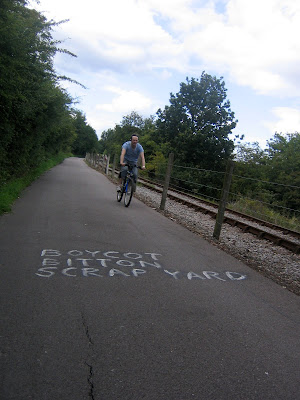 Elsewhere we see that some subversive is advocating boycotting the cafe at Bitton, because the hobbyists want to extend the railway line. It was a railway line once, it can be again. A volunteer-run train service running one train a day could be a valuable contribution to our city's transport needs.
Posted by Bristol Traffic at 09:02

Thanks BT for making sure no one missed my gaffe in thinking 2009 - 1985 = 25. There's a moral there somewhere, like engage brain before clicking publish tab. Thanks God the weather's good and most people will have better things to do than follow obscure blogs.

Not at all, it gave us an excuse to talk about John G. getting thrown off a train and made to use his own path home.