Over on Green Bristol Blog, the subversives were whining about the state of the pavements. One commenter made a claim :

In less residential areas, then the council should make clearing pavements a priority as many important people have to leave their cars in distant places and walk to work (sorry, thought I was on Bristol Traffic).


NHS stats and injuries: Sunday was the busiest day ever at Frenchay Emergency Department, due to ice related injuries. I imagine the same is true elsewhere and I have been told the ambulance service have had a record number of calls over the last two weeks.

Obviously we don't care about pedestrian A&E statistics, but we do need to correct this idea that important people need to walk to work. Only those without courage to park right outside their destination practise park+walk, we believe in park on pavement with hazard lights on. As for the snow, given all important people have 4X4, it makes it easier for us park, because there are many more spaces, such as here on Chandos Road. 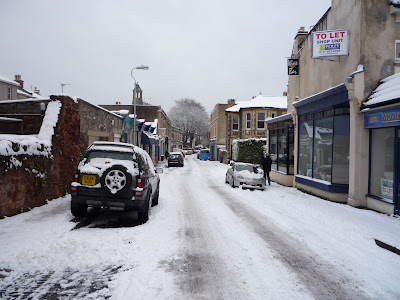 No, what annoys us is this

Not gritting the pavements encourages pedestrians to walk in our roads. 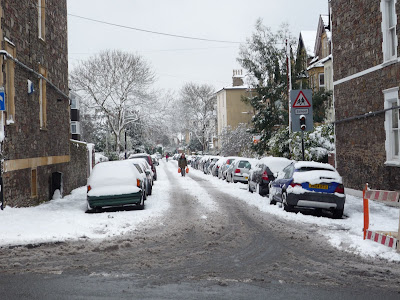 This slows us down, and here, they even walk the wrong way down a one way street! They are as bad as their tax-dodging fellow travellers, the cyclists. 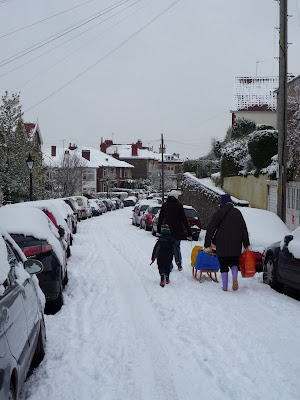 Worse than that, some are not just walking to the supermarket, they are taking their sledge there, pootling along with the entire family! This sets a terrible example, as this small child will now expect to walk around the city, maybe even play on the pavements, so endanger themselves. 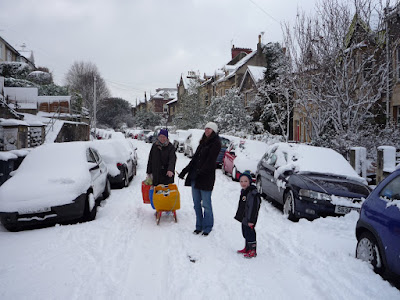 Look what happened when our reporter stopped these people and told them off! They laughed! Here we were, thinking of the safety of the people, especially their little one, and all they could do was laugh at everything we said.


These pedestrians have no respect. The sooner they are pushed back onto the pavement, the better. Even if we still need most of it to park.

Posted by Bristol Traffic at 07:12

I'd like to thank the car-owning residents of Keys Avenue, Horfield, who routinely park at least 50% of their vehicles on the pavement, with some leaving only their off-side wheels on the road. This of course offers fantastic protection to the pavement when it snows, and is considerably cheaper than gritting. But are the tax-dodgers nu-liberals and people too poor to be able to afford cars grateful for this altruistic display of public-spiritness? Are they shite.

Yes, the people who benefit from having something to lean on when they walk in what's left of the pavement, which is now easier to grit, don't recognise how much of a favour we are doing for them

And of course, when the cars drive away, they leave behind a pristine pavement. Again, where's the gratitude.