We are pleased to announce a new event for this web site, the Bristol Traffic anti-bicycle awards! These are for :

The development in the cycling-city coverage area which does its best to make bicycles feel unwanted and below other forms of movement. This development must have taken place in the previous calendar year

The UWE feature we are pleased to nominate is a new arrival, something that has been fenced off for a few months, but now visible in all its glory. It is the gateway between the main UWE campus and the former HP parking lots. Now the University of West of England's lease is expiring on some of its other lots, the old recognised pedestrian route can be withdrawn and staff/students directed here, so it is good that access is now provided. And what lovely anti-bicycle access it is!


We first get a hint that something is good by the signs everywhere, the ones saying "No pedestrian access", along with a little no bicycle sign. This says: pedestrians are not allowed on the road. But it says something better. It says "Bicycles are not a legitimate form of road transport". Presumably the Transport and Society team that are based there will be giving a talk on that very topic before long -perhaps even Josh Hart, who travelled all the way from San Francisco to UWE to learn about town planning. 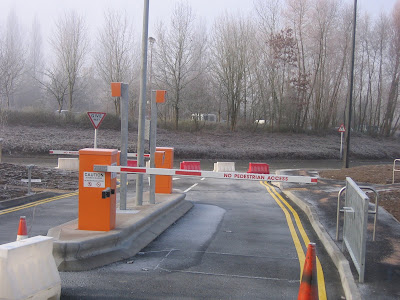 Clearly bicycles are not allowed on the road, we take that as a given, but it is nice to see the infrastructure enforce this. And here is where it gets exciting. Because what will the tax-dodgers do when they see this? Obviously, they will try to use the pavement. 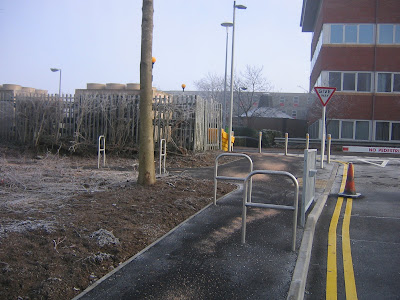 This is what lights up our eyes. Every bit of pavement here has an anti-bicycle gate on it, a Z-bend to force them to come off in the ice, to hit other bicycles, or at least know that students are not welcome to the UWE campus on bicycles, as it makes it harder for the drivers to get to any of the 25+ car parks!


And look, they are everywhere! Not just one gate, but a series of them, spaced about 5 metres apart. If every pavement in Bristol was kitted out this way, there would be no more letters to the E.P. about bicycles on the pavement! 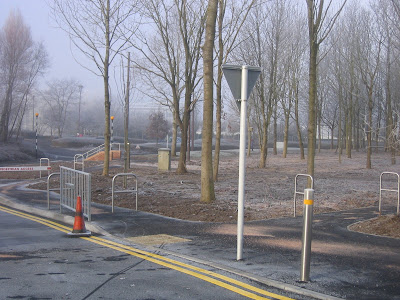 The thing that really excites is is this, the route to the right in the photo above. This is not just some random path, this is the main bike route from the A4174 ring road to UWE and the HP-Lockleaze route! This is one of the S Gloucester Cycling City bike routes! These are the places where the council and cycling activists have been having their little meetings discussing how to improve walking and cycling in S. Gloucs and the North Fringe! Yet someone -and we'd love to know who, as they will be receiving the award if this feature wins the 2010 award- decided to ignore all that and put in:

This is fantastic. You can't say it is done to stop bicycles being hit by fast moving cars, as the cars are all stopping for the barrier anyway; it would have been cheaper to put a warning-bicycles sign up on the road instead.

You can't say it was done to stop bicycles being on a footpath, as these are bike lanes; they are the only way to get a bicycle from the old campus to the new area, including the vice-chancellor office. [Incidentally, not the old vice-chancellor, the ones whose activities got the Bristol Blogger's blog suspended recently]. Indeed, it is the only way to get a bicycle to wallscourt farm gym, which, with its bike parking and changing facilities would make a good North-Fringe-Cycling-Hub -which is precisely why access to it should be restricted to cars.


No, these barriers have gone in on top of cycling city infrastructure because whoever designed this junction loves cars, hates bicycles and knows that encouraging bicycles to cycle to or near UWE will create traffic jams on Filton Avenue, so slowing down those people who drive to UWE. 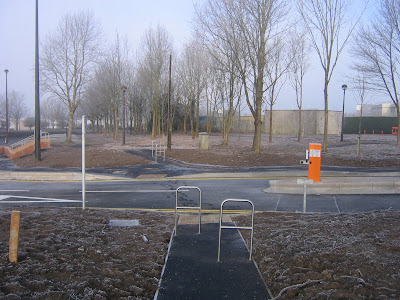 If there is one failing, it is this: because they have not planted any fences either side of the paths, there is nothing to stop mountain bikers taking the dirt at speed and then committing through the junction, as happens at the MOD site. This development needs to be finished off with fences and thorny bushes, to round off the routing.

Posted by Bristol Traffic at 11:22

I wonder if all this infrastructure was put in under the tenure of "cash mad Sir Howard Newby" !

UWE has put in a tremendous effort here. If they don't win, the vote has definitely been rigged.