Bicycles in the Bearpit

We still pine for the days when the bearpit was the premier tourist and family destination in the city.

That was why we were torn when we heard that someone was trying to do a photo documentary of cyclists in the bearpit. On the one hand, a reason to go the bearpit and enjoy it. On the other, it is celebrating bicycles. And we don't want that.

We drove down to see what was happening -can't say where we parked as someone will only steal that place. Suffice to say, it's handy, just not quite legal. 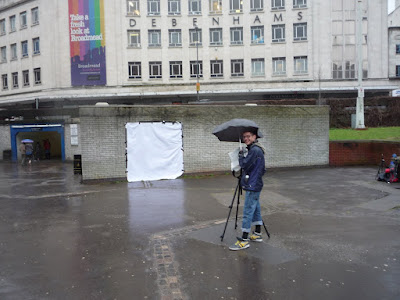 And in the bearpit? A photographer, looking cheerful despite the rain and apparently, the slightly inebriated audience. Some cyclists did turn up, we have taken their details and will report them to the relevant authorities.
Posted by Bristol Traffic at 07:42

Is there a way I can get in touch with you with a potential traffic related story via email?

I'm on paul at loop-pr.co.uk

Thanks very much,
Paul

I saw this as I was driving past at the weekend.

I was trying so hard to see what was going on that I missed the turnoff to Stokes Croft and had to go round the Bear Pit twice.