Our coverage of the anti-car streets of Horfield generated some comments from 2nd2none driving school, who seemed to misinterpret our photos of one of their instructors cars parked on the pavement as some form of criticism. Nothing could be further from the truth! We are merely jealous that the instructor who lives in the area has some empty pavement outside their house that they can call their own. In the inner city we can spend twenty minutes driving round looking for some space on a buildout or zebra crossing, yet in the suburbs, there is a bit of pavement every household can call their own. The only time we've ever said anything mildly critical of this driving school was when we caught them parking legally in Montpelier, because that's failing to teach people the local skills. Robbies driving school never gets caught doing that.


by this comment you dont actually drive and are simply a busy body with nothing better to do than ride around complaining about trivial things like this.

Bristol Traffic is a community project that exists to document, not take sides. You appear to have taken our coverage as some form of criticism, for which we must apologise.

Anyway, the driving school made some valid points, the first one being:


we teach our pupils to park correctly but anyone can clearly see that these roads are far to small to do that.
...
at times parking on the pavement is unavoidable as to keep the road clear for other users.

Exactly. There is the theory "don't park on places you aren't allowed to", and practice "park where you need to" -and its the difference between the two which we find fascinating, and why driving school and L-plated cars get extra coverage that normal cars don't usually merit. We aren't criticising, merely observing and documenting.

Now, -and this is where it gets interesting- some people replies to the driving school's comments, not agreeing with them, but instead pointing out the bit of the highway code that discusses parking on pavements! This is shocking! Even more so when at more than one of the people replying claimed to be a contributor to the site! We shall have to pay more attention to who we let submit photographs and videos, as some of them clearly hold different opinions from our own -and the rest of the tax paying motorists in the city who subsidise their pedestrian lifestyle. See that? Pedestrian. It's come to mean "slow". There's a hint there.

Fortunately, the driving school replied and made a key point that wins the argument:


as for the highway code, this is a rule book that was written in 1931 with approximately 2 million cars on the road and the motor car being a non essential commodity, not the 27 million cars that now exist on this small island. There simply isnt enough road space for driving or parking and Bristol has one of the worst managed road systems of any city's.

This is precisely what we think, which is why we exist to document how utterly out of touch the highway code is, such as its complete lack of exemptions for anyone like us doing deliveries in town.

Look at this white van, WP57WGW, parked over a zebra crossing at the bottom of Cotham Hill December 8 2010! Zebra crossings and belisha beacons are a 1930s idea -time to move on! 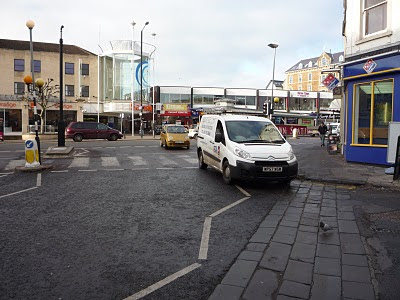 Look at N&C deliveries truck N6MOV, who know that unloading pallets takes priority over solid white "do not cross lines" and double yellow lines alongside them on the Cotham Hill on December 8. Yellow lines? Obsolete! Time to move on! 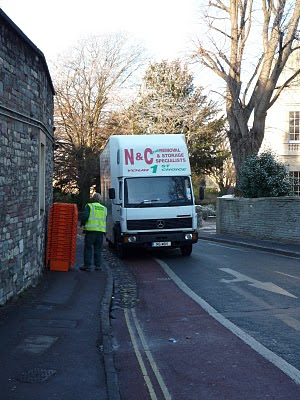 Again -what a coincidence- here on Cotham Brow, December 8, Falafel King's delivery van WR58GWG is parked up on the pavement on double yellow lines. Yes, the old highway code says you must not do this, but if you need to get falafels into van, what else can you do? Double yellow lines? Pavements wide enough for pedestrians? Obsolete! Time to move on! 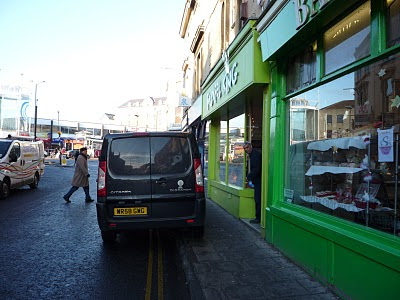 We close, however, with this video of the streets in Horfield round where the 2nd2none car was spotted, giving viewers from outside the city a harsh introduction to this area's problems. The roads aren't wide enough for cars to park two abreast, and the alternative -park on one side walking a bit- would involve walking a bit. As for double parking -forget it! These aren't the wide streets of Clifton.

The 2nd2none driving school must feel so proud as they drive round these streets, seeing what may be many former happy customers, not only having got past the test, but parking in the streets the way people in our city really need to do -even in the parts of town where there are still spaces on the other side of the road.

And of course, if you want to get new customers for your motor vehicles, there is the tilleys tactic, namely co-opting the bike path, footpath or pavement to sell your wares. Every pedestrian whose route is obstructed by a driving school vehicle will realise that driving not only gets them round town better, it lets them park conveniently afterwards, and so will be more tempted to spend the money to learn to drive.
Posted by Bristol Traffic at 07:09

Kudos to 2nd2none for speaking their mind openly about the REAL way to drive in this modern age. Never before openly has a premier motoring organisation or company had the balls to speak out and state for the record that the highway code is obsolete and our roads are too narrow to park legally. I would not have believed it had I not seen it print here.

I hope Bristol's prospective learner drivers get the opportunity to hear about your views and flock to your doors to be trained for urban driving at its finest.

I am a little confused though dear 2nd2none. How do you actually train your students to pass the highway code elements of their test. Is it a, "do as I say but not as I do" approach, or "you don't need to remember this stuff after your test, just learn it parrot fashion for now"?

Honestly - How did you actually get your licence in instruct?! All became clear when I saw that the founder James Orgar worked as a First Bus driver where such attitudes are essential to hold a PSV licence.

There are many, many opportunities to park legally on the streets of Bristol. Unfortunately, most of them will have been taken by somebody else before you get the chance. If you find that it is generally more hassle than you are prepared to submit to to find a valid place to park, you always have the option of foregoing driving altogether. It's not as if every citizen has the RIGHT to find a parking place, it's first-come-first-served. There's a limited amount of space in any city, and generally not enough room for all the people who would ideally like to drive to do so, and so an equilibrium is established. Parking on pavements, etc. is an attempt to cheat that equilibrium.

So much space, not enough cars, apparently.

I had a difficult discussion on Sunday with a guest at my house, objecting to the idea that his household (a flat) should not have space for 3 cars to park, in the road.

I did point out the logistics, and the fact that he might want to move elsewhere if he felt his household really needed that many cars, but he banged on about ideas such as "two urban professionals, and a grown-up daughter - how can we possibly manage otherwise?". And he lives in Clifton, so doesn't want to pay for his parking like they are just about to in Kingsdown.

Of course, the gardens in West Mall would make a great neighbourhood car park if only the council would see sense and get rid of the trees and tarmac the whole lot.

Now I understand: the highway code is old and therefore irrelevant because there are lots more cars and it's sometimes a bit difficult to follow the rules.
This explains a lot: I'm guessing the same applies to red lights and speed limits, especially if you're using a Mercedes.

I am keen to set her off on the right road in life.

Not once did I say the highway code was obsolete and it makes up the very basis of safe driving. I simply said that it was written along time ago when the roads were a very different place, I agree that where possible cars should park on the road properly and avoid parking with 2 wheels on the pavement, but it is not always possible in our over crouded streets. I completely agree with people should not park on double yellow lines or zig zags or to close to junction corners all of which cause a danger to other road users but I do not count parking 2 wheels on the pavement in a very narror street that was never meant for parked cars in the first place as the same level of offence. Although it should be avoided where ever possible, And whats with the comments about that I was a bus driver all about? Yes I was a bus driver and proud of it thanks, a job which I very much loved for over 8 years and like many of the other bus drivers out there did at times a very hard and demanding job fighting our way through Bristols traffic to get our passengers to and from work. Most of the people that complain about the bus services aim their complaints at the wrong people. The drivers dont have any control over the timings or cost of the service which I and many others think is very over priced to make it an alterative to the car. But since when did the management ever listen to the drivers that operate their business for them.