It became clear during the week that even Boris Johnson was out of his depth. After some final words of advice from Sarkozy -whose strategy of containment doesn't actually work when we have to drive through the areas of unrest, we finally jetted home. And then drove down to Stokes Croft

Tesco is boarded up. It's not clear whether this was due to attacks on it, or the supermarket chain accepting the inevitable and adopting this as their decor. It is still open, providing a reason to park in the bike lane, as KT04TWZ has done. 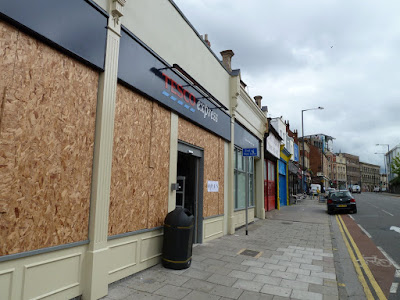 In the distance there's a woman pushing a fixie along the pavement. Given the abuse of bicycles in the English Riots (to separate them from the Ulster Riots and the regular Scottish "fixtures"), she and the cyclist heading into the city on the road should be pre-emptively arrested. 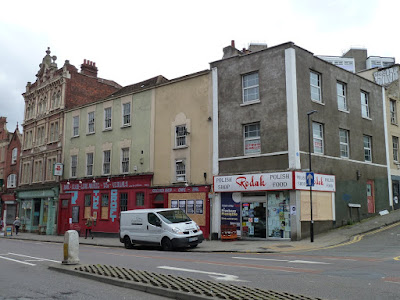 Further down, the windows of the Croft and Rodak Polish Food at the bottom of ninetree are broken -you can see them behind the bike lane/paveparking van Properbread HK07UKR. If one were to view the riots as either a popular uprising against The Man or a mass looting by consumer-hungry troublemakers, it's hard to say why either establishment was targeted. These establishments are not The Establishment. 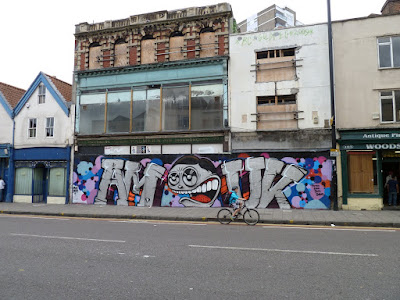 There are other places boarded up, but the presence of quality art by Petro, Epok, Sepr and others shows that this is not recent. Overall then, for the area that is now associated in Bristol and the country's mind as "the first 2011 riot" is quiet and back its normal life.

On that topic, can we point out that the graffiti covering Annabel's at No 9 actually predates the sex-shop art we covered previously. We apologise to the Annabel staff for this accidental neglect. 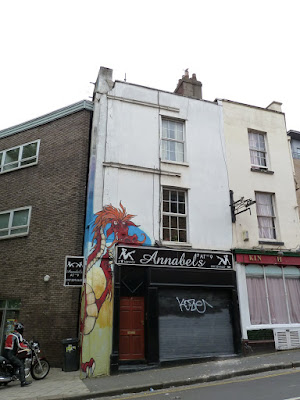 People have asked us who, given all the people like Max Hastings are writing bollocks, and David Starkey saying "it is because they is all black", why aren't we being paid to appear on television and spout some random bullshit about the causes of the riots and the measures that need to be taken?

Most of the shallow bollocks has already been written. You can blame thirty years of liberal thought, two years of government cuts, and then make up some opinions on what needs to be done next. When the Evening Post did ask for some opinions we provided some defensible data showing how civil unrest is strongly correlated with economic downturns -at which point they hung up the phone.

It seems that to get the TV and press coverage we deserve, and the appearance money- we need to have an agenda more outrageous, which blames the recent events to some downfall in society. The obvious events are, in no particular order
Many of these have been covered by other commentators. Even so, these are mostly symptoms. The root cause hasn't been addressed, namely that we aren't able to execute people based on verbal evidence from a single witness. If we had that, all the criminals would have been dealt with a long time ago.

That's right: since we stopped executing people for alleged witchcraft, Britain hasn't been the same.

Bring back Burning Witches based on hearsay! It's the only way to save the country!
Posted by Bristol Traffic at 07:41

You forgot to blame anarchists.

-good point. And communism, fascism or any other political movement. They are all surface level issues. Communism was a reaction to the root cause -the migration of the peasants (that's your ancestors) to the city, where rather than just work for the wealthy (our ancestors) they started demanding a share of the toys. Cinema and radio helped the spread of Fascism too, as the films of the rallies could be shared round the country: you could watch a Nurnberg rally, even if you weren't there. Perhaps it was industrialisation and mass transport that were the root causes.

Also, it's hard to imagine a group of anarchists co-ordinating a mass rising over facebook only to steal trainers and televisions. Somehow it just doesn't seem consistent.

We'll blame them for something else later.

Oh, and the European Union got left out too. That does justify another article. When the next emergency comes to the city