A wing mirror was spotted in Fairfield Road last week. It's probably gone now as anyone else whose van needs an MOT soon will have picked it up and duct-taped it together enough to get through the "has two wing mirrors" part of the test. 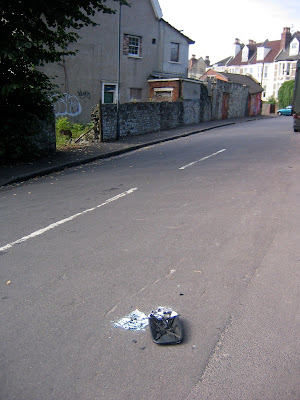 This is why it's always so traumatic when the DVLA hits Montpelier. A lot of people run untaxed vehicles not because the tax and insurance costs have to come after the RAC home recovery breakdown cover in terms of priority, but because the MOT has rules about the number of wing mirrors and the state of bodywork of vehicles, and it is impossible to meet those requirements and keep a car in Montpelier.

The War on Motorists will not be over until the government rolls out specific MOT requirements for different parts of Britain, of Bristol. In Stoke Bishop, for example, you'd fail the test for having an old car, anything less than Group G, and 2 wheel drive would only be permitted on two seater sports toys. In Montpelier, the wingmirror rule would be waived as unrealistic.Taxis would have a special "fail if the indicators and more than one brake light work" clause.
Posted by Bristol Traffic at 07:59

There is an exemption in Stoke Bishop for Toyota Priuses however you need to show evidence of a 4x4 as primary vehicle. This now needs to be an Audi Q7 or BMW X6 as a minimum these days seeing as Range Rovers and Porsche Cayennes have been adopted by the dirty masses. I do wish the government would increase fuel duty and VED for group Gs significantly so that exclusivity can be restored. PS - what is a van? I think my gardener had one once before the Toyota Hilux double cab became necessary for his watering can.