There's a weapon in Bristol that nobody discusses: Chainsaws.

They're a useful tool, but in the wrong hands, danger. Thankfully, chainsaw-crime is fairly low level in the city -and mainstream media hasn't picked up on it. Attend a Police PACT meeting and in between the hippies ranting about cars, we tax-payers rightfully complaining about bicycles and skateboarders, someone stands up and complains about a neighbour cutting someone to pieces with a chainsaw. "We'll look into it", the police say, but nothing ever happens.

This week though, Chainsaw-rage surfaced, with an altercation behind parkway station between a taxi driver and a chainsaw-wielding pickup driver. On a weekday morning.

Having recently had to drive to parkway station and then back across Bristol at 5:20 pm, experiencing the full joy of the ring road at its most stationary, it's easy to understand why this part of the city is road-rage hotbed. But at 10:20 am? The mid-morning lull? Not a tense time at all. Whoever spin their chainsaw must have had a grudge against taxis.

And who do we think in the city has the biggest grudge against taxis? That's right, cyclists. Always getting upset about the revenue-earning tax-paying taxis in the ASLs, always getting upset about the taxis in the bus lanes sounding their horns to get the tax-dodging cyclists out of the way of the important paying customer. Those are the people most likely to go over the edge, get their chainsaw out and run amok round a taxi rank -be it at Parkway or Temple Meads.

Attached is a photograph of an out-of-city Bicycle and Chainsaw shop. 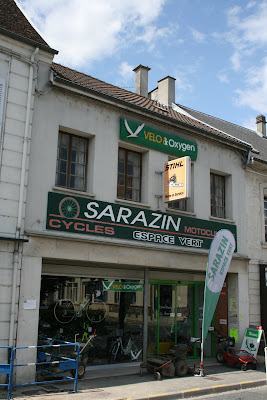 This is exactly the kind of crime-enabling one-stop-shop that should never be allowed. Bicycles are a crime, and a chainsaw in the hand of a cyclist -a crime in the making!

Posted by Bristol Traffic at 08:57