There is a new paper out which argues, according to the Daily Telegraph, that Cyclists killed more people than the 7/7 bombers, on account of people switching from the tube/bus to bicycle. We were a bit doubtful about this, the null hypothesis being that the Telegraph reporter had made everything up, but no, it turns out that the alternate hypothesis, "the researcher made everything up" is in fact the correct one. As the paper author says to Moving Target, "cycling has been a greater hazard than terrorism and is responsible for far more deaths."

Reading the paper, it is clear that the author has confused correlated with causated (i.e. there may be other causes of any increase in cycling deaths/injuries than an increase in numbers; Olympic construction springs to mind), and relies on the same weak measurement of cycling traffic as everyone else does -some samplings of a few main roads that nobody rational cycles down. And as it doesn't take any health benefits into account, overestimates the damage of cycling. That is, technically, it's bollocks. But from the researcher's perspectivel it does achieve one wonderful goal: it gets read, it gets cited, they get more funding.
Discounting the "cyclists cause more deaths than terrorists" hypothesis as being invalid, we do note something that the author missed, namely that cyclists hold up tax payers, and if there were more cyclists on the road after 7/7, more of us tax payers got held up by bicycles. That is, the cyclists will have cost the country far more in car commuter hours than the 7/7 TfL shutdown ever did.
And that is where we think, unarguably, you can say that bicycles are a greater threat to Britain than the 7/7 bombers. Really. Yes, some insane idiots blew up a bus and some tube trains. But it was a bus, not a decent car, like a Mercedes. And it was in London. Whereas bicycles, they irritate everyone across every city in Britain. They are out there, every day, getting in the way, slowing us down, creating congestion where before there was none.

When will one party stand up and recognise these people for threatening our very way of life; our dream of a quiet commute in from the suburbs to our jobs in the financial services back offices, day in day out. Not just slowing us down, but stressing us out, getting us angry, shortening our very lives!
In this city, the council has sold us out. Only the conservative party is fighting the bicycle terrorists, and they aren't doing a good job of it.
There are three groups of people out there doing their best: the bus companies (FirstBus and Turner Bus), the taxi and minicabs, and the Clifton Downs committee. The bus and taxi people have to do it discretely, punishing each bike they see by cutting them up, by going past really close, by blocking the ASL -so that eventually the cyclists will see what we are trying to tell them -that cycling is dangerous and that they should stop it.

The Clifton Downs committee, they ban bicycles, especially kids bikes, to stop them getting addicted to this class-A drug and then going on to the roads when they get bigger. 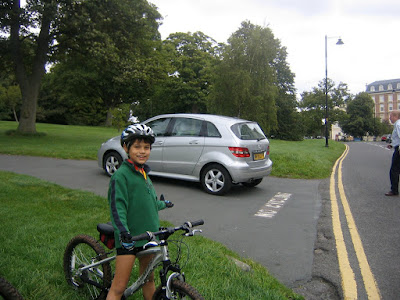 But look, here we have one of these subversives standing on the grass, right next to a no-cycling sign -there it is, on the path, between the Mercedes WR08CPY and the double yellow lines.  And he's ignoring it. He's laughing at the sign as if it is some kind of joke.

It is not - the Clifton Downs committee are standing up to bicycles, the greatest threat our country faces.  Now we have the peer-reviewed literature to back up our claims.

Posted by Bristol Traffic at 07:22

This very evening I witnessed an act of 'counter-terrorism' carried out by the driver of one of the Airport 'Flyer' buses. He was waiting at the junction of Berkeley Place with Triangle West, waiting for his chance, which duly came in the form of a cyclist coming down Triangle South in the correct lane to swing around into Triangle West. Just as the cyclist got close the bus driver suddenly pulled out in front of the cyclist.

The cyclist however had his wits about him, as they so often do, and managed to brake and swerve enough to avoid the bus, so living another day. But it was a very determined attempt on the part of the bus driver to wipe out at least one cyclist. The question is was the driver's 'counter-terrorist' offensive a private vendetta or part of a concerted effort by his employers, First Bus.

I had a run-in with an airport bus too, yesterday, where Whiteladies Road meets Queens Road; he overtook me and swerved in, cutting off my forward route so that I had to brake and go around the outside of him. If it happens again I shall report it, I think; it's the second potentially lethal encounter I've had with an airport bus (got piccy of t'other one but can't link my Flickr photo on here, apparently...)