Lift? No -a chairlift!

Now we come to the climax of our Clifton Week, the real reason we spent time there. We were in fact being sponsored by the city to come up with a dramatic plan for Bristol

Following up our engineering proposals for Clifton, here is our big one. Rather than just propose a lift to bypass Park Street, we have something far more ambitious, which would also become a tourist attraction

It's for a chairlift from Southville up to the Promenade on Royal York Crescent -one that takes a bike on the side. Here is what it looks like from the passenger seat. Incidentally, this bike was stolen in 2007 -there is still an outstanding death penalty waiting to be applied to whoever is caught in possession of it. 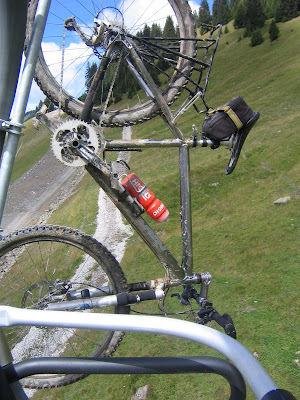 Think about it. A single cable could run from Coronation Road, over the Avon and the harbour, and swoop up the hill to Clifton. Once your bike is up there, most of the city is a downhill. Even if your final destination is the centre or Gloucester Road, a lift up the hill, followed by a bit of a descent, is all you need. The lift would eliminate all the problems of negotiating hotwells or Prince Street Bridge -that could be given over to Bus Rapid Transit. Indeed, we estimate a new chair lift system would cost less than a new bridge. It's all electric, so with a good green source of energy, carbon neutral.

Furthermore, as it would help pedestrians get from Clifton to Ashton Gate, it would provide fast and easy way for pedestrian shoppers to get to and from the proposed Tesco Ashton Gate supermarket, a worthy proposal only resisted by a few subversives and their videos. We hope that this new city chairlift could be funded from Tesco's Section 106 levy.

There is one problem: bike panniers and tagalongs are both tricky. Panniers are uncool, upgrade to a satchel. As for the tagalongs, that's a problem the engineers can worry about.
Posted by Bristol Traffic at 07:16