The Polis on Cotham Road

Bristol Traffic has developed a little rule, which is "always treat any crash with sympathy"; it's always a mess, nobody is happy. The only exception is when its one of us doing the crashing -scanning in some old photos on that theme is on our todo list. But if it is not us, then sympathy.
We also try and balance out coverage of the city, though for some reason there is a bit of a skew towards Cotham, Redland, Kingsdown and Montpelier. It's started that way, and becomes self-reinforcing. Though commute routes for some of the contributors also has something to do with it.
Here, at 17:58 on a weekday, we are at Cotham Road -again. Covering a crash, the third in this street, after a probable drunk-driving incident, and a car not looking where it was going. Today, a Fiat Bravo/Brava has taken a pretty harsh bash to the side of the car -but only to the door. It's stopped in front of a driveway, so probably hasn't been parked here. No other vehicle in sight, no bicycle or pedestrian.

Some people are talking to the police. This is just above the big zebra crossing BTW, you can see the zig zags in front of the policeman giving our cameraman a hard stare 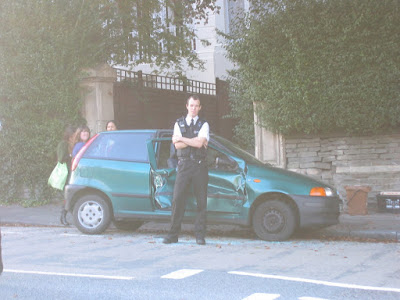 You can just see, to the left foreground of the photo, a hint bit of this policeman's colleague, coming over for a quiet word with the cameraman. Which we have on video, obviously. A nice feature of the old Canon Ixus cameras is that you can flick them from photo to film with your thumb, and then record conversations while trying to film what's going on.

Unfortunately, our camera crews do need to learn how to make videos, a key trick being "point the camera at something interesting" -the hard part in this context being trying to do this while talking to the police.

Anyway, anyone sitting through to the end will notice that they are in fact quite happy to let us take pictures, even if they don't see why anyone claiming to be from the Bristol Cycling Campaign should have any interest in road safety. Perhaps next time one of our reporters gets stopped, they should say "press" and measure the reaction then. The key thing is that the police agree that it is perfectly legal to take photographs of pretty much anything, and that we can can carry on. Which perhaps shows the difference between Bristol and London.

Over in Croydon, the local MP got stopped and searched for photographing a bike lane, an event which provided much entertainment to Crap Cycle Lanes of Croydon. Over in Waltham Forest, their Crap Cycling and Walking team got told to delete all their photographs of a bus crash. London? Even MPs get pulled over for looking at a bike lane. In Bristol? Subversives are allowed to carry on, without being arrested and soundly beaten.

This is unacceptable.
Posted by Bristol Traffic at 18:26

I drove through their at about 5.00 pm. There were a load of policemen around a house near the top of Cotham Brow, close to the junction with Cothamside. My guess is they were after someone in the house. I noticed the damaged car too and guessed there was a connection.