Another way Clifton resists joining the rest of the city, is that it remains happily free of bike lanes and bike paths. There are none. Not on the downs, not on the roads.
There is one place that would be a prestigious location for a cycling city path, but it is kept a secret. 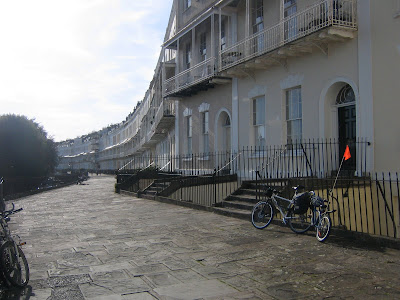 It is course, the promenade on Royal York Crescent. It is wide, not very busy, and accessible on the flat from Regent Street. A lovely place for a kid to ride quietly, a resident to wash their bike in the September sun. 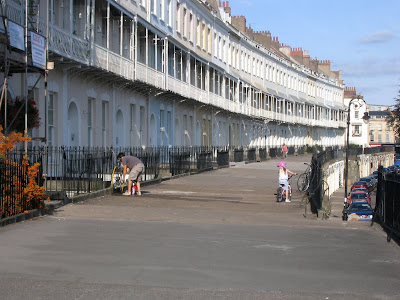 There is a small technical problem at the far end. 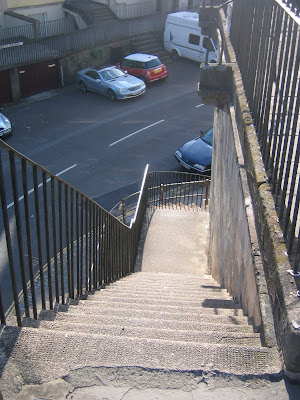 In one direction, you'd have to be good DH mountain biker, and on the other, fit and without a tagalong. 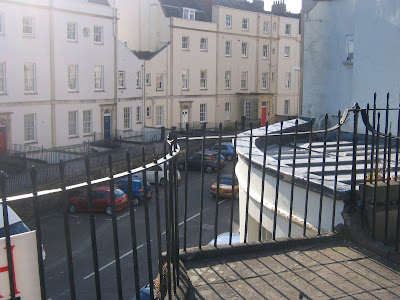 This is where we have a plan. In keeping with the idea of making bold suggestions for Cycling City engineering works, we propose a bicycle flyover from here, the under-exploited end of the promenade. This flyover would curve rightwards and provide an on ramp for bicycles heading onto the promenade from the north, and an exit route. It would join the promenade up with an approach to the suspension bridge.

Some people may worry about an anti-bicycle organisation such as ourselves proposing this, but we are not worried. Putting bicycles onto the promenade will keep them out of our way. Clifton is the neglected corner of Cycling City.

We have an even more cunning plan for this promenade, which will be covered tomorrow. The thing to know is that from here, most of the city is downhill. If you could get your bike up here, everything else is easy.
Posted by Bristol Traffic at 07:01