Gentrification is normally associated with a run down part of down being made "nice". You know when your area is becoming gentrified when you sit in on a PACT meeting and the complaints are about party noise rather than heroin addicts loitering around where the needle swap van comes. That and skateboarding.
In Bristol, gentrification means an area gets some good pubs, decent graffiti artwork -especially on the pubs- and good food, in the form of local cafes consortium Cafe Gusto and Thali Cafe.
Clifton has had a Cafe Gusto for a while, but you don't get free croissants there, so its not as good as the Bristol University outlet. It has long lacked, sadly, a Thali Cafe. Which is where one man: Jim, from the Thali Cafe team, comes to the rescue of this neglected corner of the city.
Here he is, pointing at a building. In his hand, a piece of paper. It says "October 2" 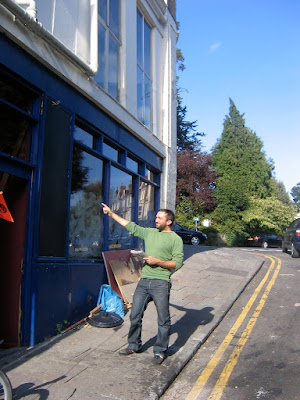 That date is the date of Clifton's October revolution: a thali takeaway cafe, serving the same food you would have to take your 4X4 over to Montpelier, or points further east or south, places where your satnav starts beeping saying "turn round now". 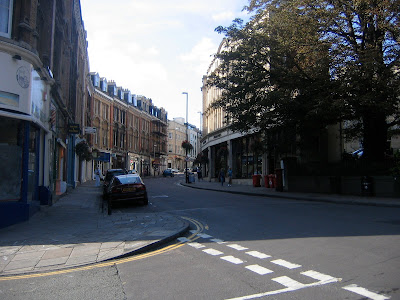 We mention drive, because people won't be cycling to this shop. There is one bit of gentrification that Clifton has resisted -there are no bike stands on these buildouts.
For a moment there appeared to be some bike stands nearby 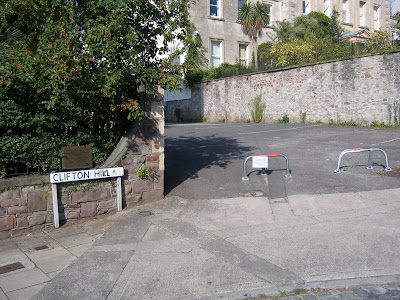 But on closer inspection: barriers to stop cars using a car park without permission.
The only place that does have parking is a line of ancient Victorian railings, up on Bristol's Secret Bike Promenade. 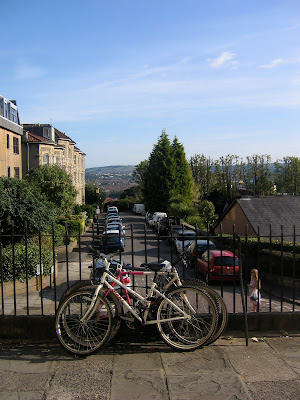 More on that underexploited tourist attraction another day. The key thing is that it's a secret, because Clifton doesn't want visitors by bike.
Now, when will Clifton get the graffiti that the inner city deserves?
Posted by Bristol Traffic at 07:21

Clifton is protected from the cycling menace by the unstinting efforts of CHIS, the Clifton Hotwells Improvement Society. Their newsletter rarely fails to castigate cyclists for riding on footpaths or desecrating Clifton's ornate railings by locking their bikes to them.

And well they should! Not only does it look ugly, think of the damage to the railings when someone saws through them to steal a bike!

CHIS have an interesting "Bad Parking" section on their site too.
http://www.cliftonhotwells.org.uk/chis_parking.html

@Alice -thanks, that's interesting, it even shows that there are plans for bike parking here too. That may fit with my forthcoming engineering proposal.