Transport options of old maids in the time of Orwell

Our recent coverage of Orwell's vision of the past, old maids making their way to holy communion, has caused dissent. We say: old maids hiking, others claim, mistakenly, that it was old maids biking.

That timely news outlet in our city, The Bristol Blogger, disagreed. Indeed, they said we were talking "bollocks" and challenging us to a duel. Furthermore, one of his on-line allies, BristleKRS, scanned in p75 of the 'Collected Essays, Journalism And Letters' volume 2 (first published 1968; Penguin edition 1970):-

However, that is the old version. It has been declared an unbook. Henceforth here is the new edition

Anyone with an existing paper copy is instructed to remove their old copy and insert a printed out version of our new version. We expect the known subversives in the city to comply.

On the topic of the duel, Captain Bikebeard has offered their homemade tallbikes for a duel. However, that would involve riding a bicycle, and that would be unacceptable.

Instead we have bought the Bristol Blogger a beer. One of the drinks on this table is our gift to them. 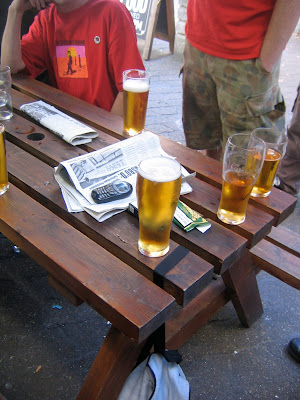 There. No need for long-lasting literary feuds in this city. Not when they can be settled over a couple of beers in one of the many fine drinking establishments in the city.
Posted by Bristol Traffic at 17:01

George would have been proud of your stand against unbooks.

Is Bristol ready for it's own "Ben Hurt" or Zoobombing event since Cap'n brought the Veer movie to town?

No, but a resurrection of the Bristol MTB "Steps of the city" ride could be fun -held on Boxing day, round Kingsdown and the University, finish down Christmas Steps.

Could tie in with "Wild In The Streets"?
http://video.mpora.com/watch/Rp5x9USWN/

nice! worth covering in a post of its own.

What I don't understand is why has KRS got a book (1970 edition) that's older than him?

This makes me suspicious. I think he may frequent second hand bookshops ...