Lot of people chose not to drive to the St W's event, presumably the drink-driving laws getting in the way of sensible travel.
Here see a purple milk float with room for six, behind the three person sound-system bike. The front two are in charge of movement, while the one at the back powers the amplifier and manages the ipod-based music collection. He also gets to eat off a plate. 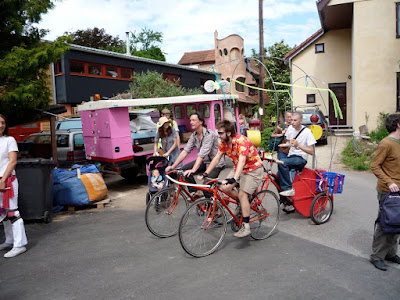 We see someone on a fixie, and while we are yet to decide whether this is fashion getting in the way of sensible, a discussion with this rider on their downhill-MTB related knee and leg surgery convinced us that some people do it as it is less dangerous than DH work. His daily commute up Park Street is good for fitness, apparently. 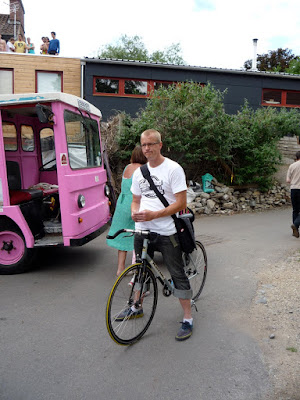 That said, he got very wistful when the trenchard street lift was mentioned to him. When will that facility become an official part of a cycling city, we wonder? 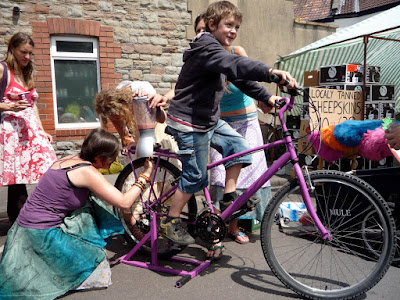 Nearby, a mix-yourself smoothie system. Finally, a use for small children. 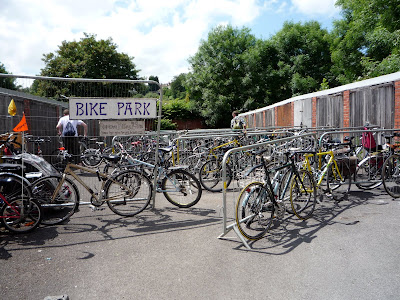 Just outside the fenced off area -a large, supervised bike park. This is unusual, as even in years past when the Ashton Court festival was free, there was nothing like this. It will enable many people to cycle to the fair, get drunk, and then ride home.
Posted by Bristol Traffic at 07:24

Yes Paul is a talented multi-tasker, he managed to also hold the ribbon for the opening of the new cylepath, whilst still enjoying his lunch and without interrupting the flow of music, fantastic !!!

I was very impressed with the bike parking. There's some more pictures of curious bikes at the fair here: